The history of theatrical scenery is as old as the theatre itself, and just as obtuse and tradition bound. What we tend to think of as 'traditional scenery', i.e. two-dimensional canvas-covered 'flats' painted to resemble a three-dimensional surface or vista, is a relatively recent innovation and a significant departure from the more ancient forms of theatrical expression, which tended to rely less on the actual representation of space senerial and more on the conveyance of action and mood. By the Shakespearean era, the occasional painted backdrop or theatrical prop was in evidence, but the show itself was written so as not to rely on such items to convey itself to the audience. However, this means that today's set designers must be that much more careful, so as to convey the setting without taking away from the actors. [1]

Our more modern notion of scenery, which dates back to the 19th century, finds its origins in the dramatic spectacle of opera buffa , from which the modern opera is descended. Its elaborate settings were appropriated by the 'straight', or dramatic, theatre, through their use in comic operettas, burlesques, pantomimes and the like. As time progressed, stage settings grew more realistic, reaching their peak in the Belasco realism of the 1910-'20s, in which complete diners, with working soda fountains and freshly made food, were recreated onstage. Perhaps as a reaction to such excess and in parallel with trends in the arts and architecture, scenery began a trend towards abstraction, although realistic settings remained in evidence, and are still used today. At the same time, the musical theatre was evolving its own set of scenic traditions, borrowing heavily from the burlesque and vaudeville style, with occasional nods to the trends of the 'straight' theatre. Everything came together in the 1980s and 1990s and, continuing to today, until there is no established style of scenic production and pretty much anything goes. Modern stagecraft has grown so complex as to require the highly specialized skills of hundreds of artists and craftspeople to mount a single production.

The construction of theatrical scenery is frequently one of the most time-consuming tasks when preparing for a show. As a result, many theatres have a place for storing scenery (such as a loft) so that it can be used for multiple shows. Since future shows typically are not known far in advance, theatres will often construct stock scenery that can be easily adapted to fit a variety of shows. Common stock scenery types include: [2] 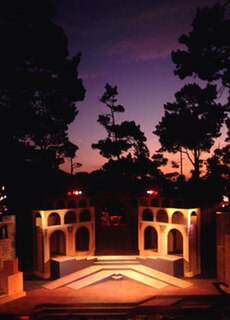 The following outline is provided as an overview of and topical guide to theatre: 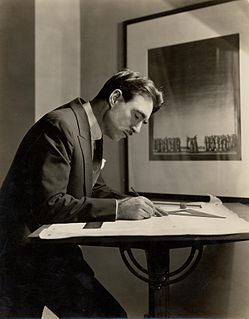 Stagecraft is the technical aspect of theatrical, film, and video production. It includes constructing and rigging scenery; hanging and focusing of lighting; design and procurement of costumes; make-up; stage management; audio engineering; and procurement of props. Stagecraft is distinct from the wider umbrella term of scenography. Considered a technical rather than an artistic field, it is primarily the practical implementation of a scenic designer's artistic vision. 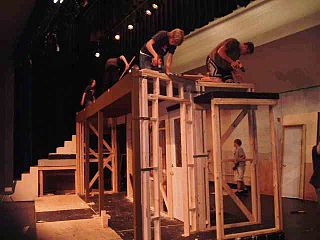 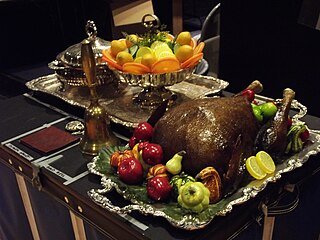 A prop, formally known as (theatrical) property, is an object used on stage or screen by actors during a performance or screen production. In practical terms, a prop is considered to be anything movable or portable on a stage or a set, distinct from the actors, scenery, costumes, and electrical equipment. Consumable food items appearing in the production are also considered props.

The Teatro Olimpico is a theatre in Vicenza, northern Italy, constructed in 1580–1585. The theatre was the final design by the Italian Renaissance architect Andrea Palladio and was not completed until after his death. The trompe-l'œil onstage scenery, designed by Vincenzo Scamozzi, to give the appearance of long streets receding to a distant horizon, was installed in 1585 for the very first performance held in the theatre, and is the oldest surviving stage set still in existence. The full Roman-style scaenae frons back screen across the stage is made from wood and stucco imitating marble. It was the home of the Accademia Olimpica, which was founded there in 1555.

There are four basic theatrical forms either defined, implied, or derived by or from Aristotle: Tragedy; Comedy; Melodrama; and Drama. Any number of styles can be used to convey these forms. 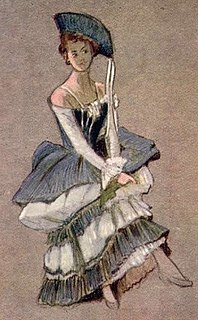 Costume design is the creation of clothing for the overall appearance of a character or performer. Costume may refer to the style of dress particular to a nation, a class, or a period. In many cases, it may contribute to the fullness of the artistic, visual world which is unique to a particular theatrical or cinematic production. The most basic designs are produced to denote status, provide protection or modesty, or provide visual interest to a character. Costumes may be for a theater, cinema, or musical performance but may not be limited to such. Costume design should not be confused with costume coordination which merely involves altering existing clothing, although both create stage clothes.

The Restoration spectacular, or elaborately staged machine play, hit the London public stage in the late 17th-century Restoration period, enthralling audiences with action, music, dance, moveable scenery, baroque illusionistic painting, gorgeous costumes, and special effects such as trapdoor tricks, "flying" actors, and fireworks. These shows have always had a bad reputation as a vulgar and commercial threat to the witty, "legitimate" Restoration drama; however, they drew Londoners in unprecedented numbers and left them dazzled and delighted.

A revolving stage is a mechanically controlled platform within a theatre that can be rotated in order to speed up the changing of a scene within a show. A fully revolving set was an innovation constructed by the hydraulics engineer Tommaso Francini for an elaborately produced pageant, Le ballet de la délivrance de Renaud, which was presented for Marie de Medici in January 1617 at the Palais du Louvre and noted with admiration by contemporaries. Such a stage is also commonly referred to as a turntable. 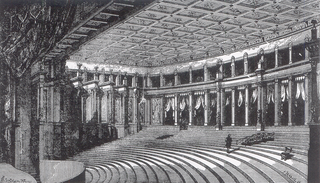 Nineteenth-century theatre describes a wide range of movements in the theatrical culture of Europe and the United States in the 19th century. In the West, they include Romanticism, melodrama, the well-made plays of Scribe and Sardou, the farces of Feydeau, the problem plays of Naturalism and Realism, Wagner's operatic Gesamtkunstwerk, Gilbert and Sullivan's plays and operas, Wilde's drawing-room comedies, Symbolism, and proto-Expressionism in the late works of August Strindberg and Henrik Ibsen.

Le Cocu magnifique is a Belgian play by Fernand Crommelynck. It was first published in 1921.

John Cameron Porteous, better known as Cameron Porteous, is a Canadian set and costume designer. Porteous served as the head of design at the Shaw Festival in Niagara-on-the-Lake, Ontario, from 1980 to 1997. He is also known for his production designs for films, including the 1991 film Beethoven Lives Upstairs.

Sony Hall, is a concert venue run by Blue Note Entertainment Group located on West 46th Street in the Theater District, Manhattan, New York City. It originally opened as a Broadway theatre. Like many theaters in NYC, it has served many functions since its opening in 1938. Located in the basement of the Paramount Hotel, it began as Billy Rose's Diamond Horseshoe nightclub where the 1945 film Diamond Horseshoe was filmed, and later spent time as a burlesque theater before becoming a legitimate Broadway theatre under the names Century Theatre, Mayfair Theatre, and Stairway Theatre. As a Broadway theater, it is most well known for the Tony Award winning original Broadway production transfer of On Golden Pond in 1979. After becoming a private venue through the 1980s and remaining mostly closed through the 1990s and 2000s, it reemerged in 2013 after a 20-million-dollar renovation as a theater hosting the immersive production Queen of the Night. It is currently run as a live music performance venue showcasing audio and visual technology by Sony.