Lighting technicians are responsible for the movement and set up of various pieces of lighting equipment for separation of light and shadow or contrast, depth of field or visual effects. Lighting Technicians may also lay electrical cables, wire fixtures, install color effects or image patterns, focus the lights, and assist in creating effects or programming sequences.

A lighting technician's work concerns safety of rigging and working with objects which can be very heavy and get very hot.

Some local unions such as the International Alliance of Television Stage Employees (IATSE) Hollywood chapter local #728, have been qualifying members by certification and recognition through the Entertainment Stage Technologies Association (ESTA) with their Entertainment Technicians Certification Program (ETCP). Basic skill sets are now standardized, and sets and stage are safer through this program.

Also, specialty roles are called upon the lighting technician such as:

Hours of work also vary. For example, those employed by large television productions generally work more than 40 hours a week, 60 hours or more are not uncommon. Technicians and other crew members typically work a 12-hour day.

Depending on script requirements, stage and locations bring on their own requirements for lighting and effects. Out of state, or country to get the right look in a script is not uncommon. Location work always brings on its own challenges. Weather is always a factor when going to a location. Technicians are like scouts and have to be prepared for all kinds of weather as per the season.

Working conditions for lighting technicians vary a great deal from one job to another. Lighting technicians generally spend a lot of time on their feet and the pace of work can become hectic. Last-minute changes are often required and safety precautions must be observed when handling hot lamps, climbing ladders or working on high voltage electrical cables and equipment. Lighting technicians are routinely required to lift and carry the heaviest and more dangerous equipment compared to the other departments and office staff.

The film set electrical department hierarchy is as follows: Electrical lighting techs (rigging electrical lighting techs) report to the Best Boy (Assistant Chief Lighting Technician or ACLT) who reports to the Gaffer (Chief Lighting Technician or CLT), who is the head of the department. The Rigging Best Boy (Rigging Assistant Chief Lighting Technician) reports to the Rigging Gaffer (Chief Rigging Technician) who is the head of the rigging, but not the department. Both rigging heads report to the ACLT and CLT of the department. The Gaffer is the Head of the Set Lighting Department and reports to the Director of Photography (Cinematographer) to make decisions on the creative lighting on the set (or on location), and is responsible for executing those decisions. A budget deciphered from the production schedule, script and vision mandates the types of lights and how to proceed with rigs. [7]

The Stage lighting department hierarchy is as follows:

In theatre, a lighting designer works with the director, choreographer, set designer, costume designer, and sound designer to create the lighting, atmosphere, and time of day for the production in response to the text, while keeping in mind issues of visibility, safety, and cost. The LD also works closely with the stage manager or show control programming, if show control systems are used in that production. Outside stage lighting, the job of a Lighting Designer can be much more diverse and they can be found working on rock and pop tours, corporate launches, art installations, or lighting effects at sporting events.

Stagecraft is a technical aspect of theatrical, film, and video production. It includes constructing and rigging scenery; hanging and focusing of lighting; design and procurement of costumes; make-up; stage management; audio engineering; and procurement of props. Stagecraft is distinct from the wider umbrella term of scenography. Considered a technical rather than an artistic field, it is primarily the practical implementation of a scenic designer's artistic vision.

In North American filmmaking a Key Grip is a senior role for an experienced professional necessary on every set. Their responsibilities are extensive and range from supervising Grip crews, assessing what equipment is necessary for each shooting location, coordinating the transportation of this equipment and its set up, the general movement and positioning of the camera and collaborating with the Director of Photography. 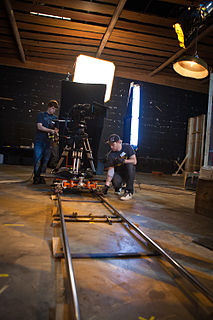 In the United States, Canada and the United Kingdom, grips are technicians in the filmmaking and video production industries. They constitute their own department on a film set and are directed by a key grip. Grips have two main functions. The first is to work closely with the camera department to provide camera support, especially if the camera is mounted to a dolly, crane, or in an unusual position, such as the top of a ladder. Some grips may specialize in operating camera dollies or camera cranes. The second main function of grips is to work closely with the electrical department to create lighting set-ups necessary for a shot under the direction of the director of photography.

In a film crew there are two kinds of best boy: best boy electric and best boy grip. They are assistants to their department heads, the gaffer and the key grip, respectively. In short, the best boy acts as the foreman for the department. A woman who performs the duties of a best boy may be called best girl. All are sometimes called best person.

A sound stage is a soundproof, hangar-like structure, building, or room, used for the production of theatrical film-making and television productions, usually located on a secured movie or television studio property.

Running crew, run crew or stage crew, is a collective term used in theatre to describe the members of the technical crew who supervise and operate ("run") the various technical aspects of the production during a performance. While the "technical crew" includes all persons other than performers involved with the production, such as those who build and take down the sets and place the lighting, the term "running crew" is generally limited to those who work during an actual performance.

A lighting control console is an electronic device used in theatrical lighting design to control multiple stage lights at once. They are used throughout the entertainment industry and are normally placed at the front of house (FOH) position or in a control booth.

The light board operator or moving light programmer, is the electrician who operates and/or programs the light board. Depending on the scale and type of production, the board op may be responsible for conventional or automated lighting fixtures, as well as practicals and, in some instances, controlling video as well.

In theatre, an electrician is a person who works with the various aspects of lighting. Some of the positions among electricians include the lighting supervisor, master electrician, deck electrician, light board operator, moving light programmer, followspot operator, as well as simply electricians. This group is generally known as the "Electrics" Department or LX Department.

FocusTrack is a database program created specifically for stage lighting applications. The program is designed to allow lighting designers, lighting programmers and lighting electricians to document the way that a show is lit, in order to be able to accurately maintain the look of the lighting over the run of the show, and to be able to re-create the lighting on tour or for future productions of the show in other venues.

In film and television crews, the gaffer or chief lighting technician is the head electrician, responsible for the execution of the lighting plan for a production. The term "gaffer" originally related to the moving of overhead equipment to control lighting levels using a gaff. The gaffer's assistant is the best boy electric.