A utility sound technician, also referred to as sound assistant, sound maintenance or cableperson is an assistant to both the production sound mixer and the boom operator on a film or television set. Although sometimes the utility pulls cable, he or she is more than just a cableperson. The utility is a jack of all trades, assisting in setting up, operating and maintaining the running order of equipment, often acting as a second boom operator, or even second mixer, and also repairing and servicing equipment such as cables and hardware as necessary. As both mixer and boom operator(s) may be busy with their tasks at any given time, the utility may also apply or adjust personal microphones or actors' wireless transmitters, may move microphones or assist in running cables, and may liaise with other departments on issues such as noise minimisation and set lockdown. [1] 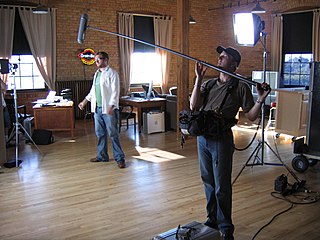 A production sound mixer, location sound recordist, location sound engineer or simply sound mixer is the member of a film crew or television crew responsible for recording all sound recording on set during the filmmaking or television production using professional audio equipment, for later inclusion in the finished product, or for reference to be used by the sound designer, sound effects editors, or foley artists. This requires choice and deployment of microphones, choice of recording media, and mixing of audio signals in real time. 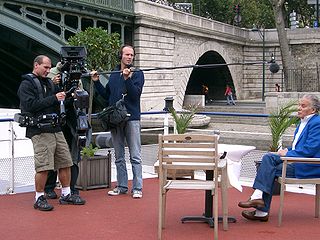 "Jack of all trades, master of none" is a figure of speech used in reference to a person who has dabbled in many skills, rather than gaining expertise by focusing on one.

A utility may start their career as some form of trainee and move on to utility as their competency increases, or may start as a utility if their experience and knowledge permits. Utilities typically move on to become boom operators or mixers themselves, taking over roles in the sound department previously held by their superiors. In studio based television production, the route for promotion from sound assistant is to sound technician/operator, and finally to sound supervisor. Formal qualifications are not specified for technicians in studio environments, although employers typically look for basic numeracy and literacy, and a solid foundation in maths and physics. Many applicants have A levels/H grades or have taken courses to certificate, diploma or degree level, such as ft2 (Freelance Film and Television Training). As the film and big budget narrative television industries are typically less corporate in nature than studio based television, utility technicians may have no training other than their experience from simply working in the sound department. [2]

A utility sound technician typical makes between $20-$60 an hour with overtime after 8 hours and double time after 12 hours. This varies depending on their exact role and production budget. Usually the production sound mixer will hire boom operator(s) and utility technicians that they know and trust, although one may be provided by the production in some cases. 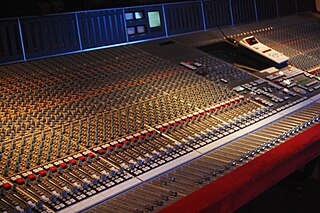 Electrical lighting technicians (ELT) or simply lighting tech., are involved with rigging stage and location sets and controlling artificial, electric lights for art and entertainment venues or in video, television, or film production.

Running crew, run crew or stage crew, is a collective term used in theatre to describe the members of the technical crew who supervise and operate ("run") the various technical aspects of the production during a performance. While the "technical crew" includes all persons other than performers involved with the production, such as those who build and take down the sets and place the lighting, the term "running crew" is generally limited to those who work during an actual performance.

Filmmaking is the process of making a film, generally in the sense of films intended for extensive theatrical exhibition. Filmmaking involves a number of discrete stages including an initial story, idea, or commission, through screenwriting, casting, shooting, sound recording and pre-production, editing, and screening the finished product before an audience that may result in a film release and exhibition. Filmmaking takes place in many places around the world in a range of economic, social, and political contexts, and using a variety of technologies and cinematic techniques. Typically, it involves a large number of people, and can take from a few months to several years to complete.

A television studio, also called a television production studio, is an installation room in which video productions take place, either for the recording of live television to video tape, or for the acquisition of raw footage for post-production. The design of a studio is similar to, and derived from, movie studios, with a few amendments for the special requirements of television production. A professional television studio generally has several rooms, which are kept separate for noise and practicality reasons. These rooms are connected via 'talkback' or an intercom, and personnel will be divided among these workplaces. 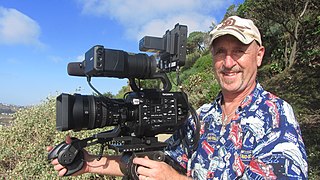 Electronic field production (EFP) is a television industry term referring to a video production which takes place in the field, outside of a formal television studio, in a practical location or special venue. Zettl defines EFP as using "both ENG and studio techniques. From ENG it borrows its mobility and flexiblity; from the studio it borrows its production care and quality control. EFP takes place on location and has to adapt to the location conditions... Good lighting and audio are always difficult to achieve in EFP, regardless of whether you are outdoors or indoors. Compared to ENG, in which you simply respond to a situation, EFP needs careful planning."

Professional audio, abbreviated as pro audio, refers to both an activity and a category of high quality, studio-grade audio equipment. Typically it encompasses sound recording, sound reinforcement system setup and audio mixing, and studio music production by trained sound engineers, audio engineers, record producers, and audio technicians who work in live event support and recording using audio mixers, recording equipment and sound reinforcement systems. In contrast, consumer audio equipment is a lower grade of gear which is used by regular people for the reproduction of sound in a private home on a home stereo or home cinema system.

The French perchman is equivalent to the U.S. boom operator in film production, also called the sound assistant or boomer, but differs regarding attributions. The perchman is the production sound mixer's assistant and is in charge of the microphone placement, typically using a light and telescopic pole also called a fish pole or boom. 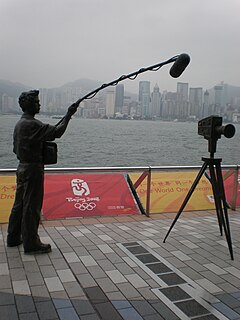 An operator is a professional designation used in various industries, including broadcasting, computing, power generation and transmission, customer service, physics, and construction. Operators are day-to-day end users of systems, that may or may not be mission-critical, but are typically managed and maintained by technicians or engineers. They might also work on a 24-hour rotating shift schedule. 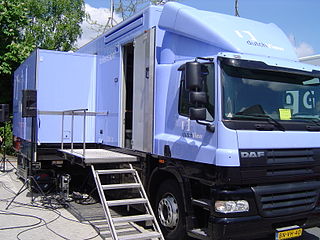 A television production truck is a small mobile production control room to allow filming of events and video production at locations outside a regular television studio. They are used for remote broadcasts, outside broadcasting (OB), and electronic field production (EFP). Some require a crew of as many as 30 people, with additional trucks for additional equipment as well as a satellite truck, which transmits video back to the studio by sending it up through a communications satellite using a satellite dish, which then transmits it back down to the studio. In contrast, some production trucks include a satellite transmitter and satellite dish for this purpose in a single truck body to save space, time and cost.

David Acord is an American sound editor and voice actor best known for his contribution as a supervising sound editor of the 2015 film Star Wars: The Force Awakens. Acord received a nomination for the Academy Award for Academy Award for Best Sound Editing and British Academy Film Award for Best Sound for his work on The Force Awakens, with fellow sound editor Matthew Wood. He also provided the voice of several characters in the film, including the stormtrooper FN-2199. Though the voice role is minimal, the character gained considerable attention on the Internet following the film's release. Acord also had minor voice roles as an Imperial Male PA and two stormtroopers on episodes of Star Wars Rebels.