Second unit is a discrete team of filmmakers tasked with filming shots or sequences of a production, separate from the main or "first" unit. [1] The second unit will often shoot simultaneously with the other unit or units, allowing the filming stage of production to be completed faster.

The functions of the second unit vary, but typically the first unit films the key face-to-face drama between the principal actors. Two frequent ways a second unit is used are:

In both of these scenarios, the purpose of the second unit is to make the most efficient use of some of the resources that are expensive or scarce in film production: actors' and directors' shooting time, sound stage usage and the cost of sets that may have been built on stages.

The work of second units should not be confused with multiple-camera setups, where several cameras film the same scene simultaneously. Large productions may have multiple second units. Although filmmakers may refer to having "three or four units working", each unit would be called an "additional second unit"; usually none would be described as the third or fourth unit.

The second unit has its own director and cinematographer. A key skill for a second unit director is to be able to follow the style being set by the film's primary director. Peter MacDonald, second unit director on X-Men Origins: Wolverine , The Bourne Ultimatum , and Harry Potter and the Goblet of Fire , has said, "The most important thing about any second unit is that you can't tell the difference between the second unit and the first unit. It must have the stamp of the first unit, both in photography and the style of direction. ... You try to copy what the first unit does as much as possible. You mustn't be on an ego trip and try to do your own style, because your material has to cut into theirs and it mustn't jar, it must fit in exactly so no-one can tell the difference." [2] Brett Ratner, commenting about Conrad Palmisano, who directed second unit for Ratner on Rush Hour 3 and After the Sunset , said, "He has the understanding of what it takes to create a great action sequence and never deviate from the story or the tone of the film." [3]

Because second units often film scenes with stunts and special effects in action movies, the job of stunt coordinator is often combined with that of second unit director. Many second unit directors were stunt coordinators first, including Vic Armstrong, who has directed second unit on The Amazing Spider-Man , Mission: Impossible III , and War of the Worlds ; Simon Crane, who did Men in Black 3 , Frankenstein , and X-Men: The Last Stand ; and Terry J. Leonard, responsible for second unit on Cowboys & Aliens , The Expendables , and Die Hard with a Vengeance .

Second unit director can be a stepping stone for aspiring directors to gain experience. Unlike an assistant director, who is second-in-command to the main director, a second unit director operates independently. Second unit directors who have gone on to become full-fledged film directors include former editors Peter Hunt ( Goldfinger ), John Glen ( On Her Majesty's Secret Service ), stunt coordinator David R. Ellis ( Final Destination 2 ), and Frank Marshall, who directed second unit for Steven Spielberg whilst also working as producer, on Indiana Jones and the Last Crusade , Empire of the Sun , and The Color Purple . Some who became directors may return to working predominantly as second unit directors for the remainder of their career. Notable examples include Yakima Canutt ( Ben-Hur , 1959) and Michael D. Moore, who worked on more than sixty films, including Butch Cassidy and the Sundance Kid (1969), Patton (1970), and the first three Indiana Jones films in the 1980s.

It is common for certain personnel involved with a production in another capacity to also function as a second unit director, benefiting from their understanding of the material and relationship with the production's director or producers. For example, English actor Andy Serkis, who plays Gollum, was second unit director on Peter Jackson's three-part adaptation of J.R.R. Tolkien's fantasy novel The Hobbit . Actor George Peppard, whilst the star of the detective drama Banacek , also served as second unit director for several episodes of the series.

A notable exception to having more than one filming unit is director Christopher Nolan, who has avoided the use of a second unit in movies such as The Dark Knight and Inception , preferring instead to oversee every shot personally with cinematographer Wally Pfister. [4] 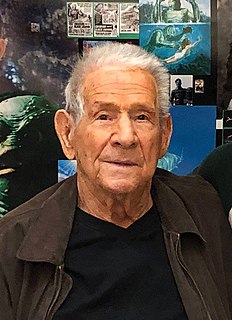 Ricou Browning is an American film director, actor, producer, screenwriter, underwater cinematographer and stuntman. He is best known for his underwater stunt work, playing the Gill-man in Creature from the Black Lagoon, Revenge of the Creature and The Creature Walks Among Us. Other actors portrayed the creature on land. He is also the only actor to have portrayed the creature more than once. He is the only surviving Gill-man actor, and the last surviving original actor to portray any of the Universal Classic Monsters. Browning also co-created Flipper.

Ronin is a 1998 American action thriller film directed by John Frankenheimer and written by John David Zeik and David Mamet, under the pseudonym Richard Weisz. It stars Robert De Niro, Jean Reno, Natascha McElhone, Stellan Skarsgård, Sean Bean, and Jonathan Pryce. The film is about a team of former special operatives hired to steal a mysterious, heavily guarded briefcase while navigating a maze of shifting loyalties. Ronin is noted for its realistic car chases in Nice and Paris, and its convoluted plot that uses the briefcase as a MacGuffin.

In filmmaking, a body double is a person who substitutes in a scene for another actor such that the person's face is not shown.

Filmmaking is the process of making a film, generally in the sense of films intended for extensive theatrical exhibition. Filmmaking involves a number of complex and discrete stages including an initial story, idea, or commission, through screenwriting, casting, shooting, sound recording and pre-production, editing, and screening the finished product before an audience that may result in a film release and an exhibition. Filmmaking takes place in many places around the world in a range of economic, social, and political contexts, and using a variety of technologies and cinematic techniques.

Principal photography is the phase of film production in which the bulk of the movie is filmed, with actors on set and cameras rolling, as distinct from pre-production and post-production.

The Rookie is a 1990 American buddy cop action film directed by Clint Eastwood and produced by Howard G. Kazanjian, Steven Siebert and David Valdes. It was written from a screenplay conceived by Boaz Yakin and Scott Spiegel. The film stars Charlie Sheen, Clint Eastwood, Raul Julia, Sônia Braga, Lara Flynn Boyle, and Tom Skerritt. Eastwood plays a veteran police officer teamed up with a younger detective played by Sheen, whose intent is to take down a German crime lord in downtown Los Angeles, following months of investigation into an exotic car theft ring.

In filmmaking, dailies are the raw, unedited footage shot during the making of a motion picture. They are thus referred to because usually at the end of each day, its footage is developed, synced to sound, and printed on film in a batch for viewing the next day by the director, for selected actors and film crew members. Dailies serve as an indication of how the filming and the actors' performances are progressing.

Victor Monroe Armstrong is a British film director, stunt coordinator, second unit director, and stunt double – the world's most prolific according to the Guinness Book of Records.

Walter C. Pfister is an American cinematographer and director, who is best known for his work with acclaimed filmmaker Christopher Nolan. Some of his collaborations with Nolan include Memento (2000), The Dark Knight Trilogy (2005–2012), and Inception (2010). For his work on Inception (2010), Pfister won an Academy Award for Best Cinematography and received a BAFTA Award nomination.

Day of the Panther and Strike of the Panther are two Australian direct-to-video martial arts action films directed by Brian Trenchard-Smith in 1987 starring Edward Stazak as Jason Blade. The films were shot at the same time and released consecutively.

Films made in the 1970s featuring the character of James Bond included Diamonds Are Forever, Live and Let Die, The Man with the Golden Gun, The Spy Who Loved Me, and Moonraker.