The role of an assistant director on a film includes tracking daily progress against the filming production schedule, arranging logistics, preparing daily call sheets, checking cast and crew, and maintaining order on the set. They also have to take care of the health and safety of the crew. [1] The role of an assistant to the film director is often confused with assistant director but the responsibilities are entirely different. The assistant to the film director manages all of the directors in development, pre-production, while on set, through post-production and is often involved in both personal management as well as creative aspects of the production process.

Historically, assistant directing was a stepping stone to directing work; Alfred Hitchcock was an AD, as well as Akira Kurosawa. This was when the role was more general and encompassed all aspects of filmmaking such as set design and script editing. This transition into film directing is no longer common in feature films, as the role has focused into a more logistical and managerial position. It is more common now for an assistant director to transition to a theatre production management or producer role than to directing, with contemporary exceptions such as James McTeigue.

Often, the role of assistant director is broken down into the following sub-roles:

The sub-roles of assistant directors differ among nations. For example, the distinction between second second AD and third AD is more common in North America. British and Australian productions, rather than having a second second AD, will hire a "second" 2AD experienced in the same duties, and trained to the same level, to allow a division of the duties. 3ADs in Britain and Australia have different duties from a second second AD, and the terms are not synonymous. [8]

One of the first AD's most important responsibilities is to "call the roll" — that is, call out a series of specific cues for each take to ensure that all cast and crew on set are aware of exactly what is going on so they can perform their particular role at the appropriate moment. Over the years, special procedures have been developed for this task to achieve maximum efficiency during shooting, which are usually some variant of the following:

The above roll sequence can be varied by, for example, eliminating the sound calls and the clapping of the slate if the shot is mute or "MOS" ("MOS" is an abbreviation of unknown origin for shooting without sound). At other times, for expediency (e.g. if the shot begins with a closeup of a closed door which then opens), the slate may be shown at the end of the take rather than the beginning. In this case, once the sound is rolling, there is an audible announcement of "End board" (also "end slate", "tails", "tail slate", or "tail sticks") so that the editing department knows to look for the sync marks at the end of the action. At the conclusion of the action, the director will still call "cut", but the first AD (and possibly others) will immediately call "end board!" or so that the camera and sound recorder are not turned off before the clapper is clapped. Also, as a visual cue to the editors, the clapper-board will be shown inverted on camera. 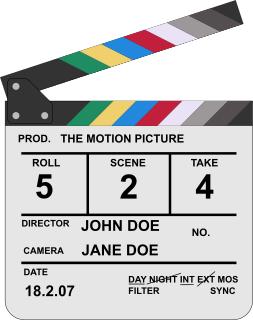 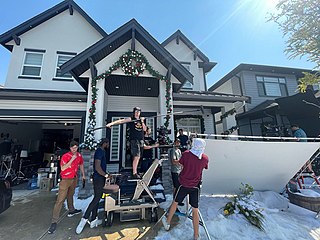 A camera operator, or depending on the context cameraman or camerawoman, is a professional operator of a film camera or video camera as part of a film crew. The term "cameraman" does not imply that a male is performing the task.

In a film crew there are two kinds of best boy: best boy electric and best boy grip. They are assistants to their department heads, the gaffer and the key grip, respectively. In short, the best boy acts as the foreman for the department. A woman who performs these duties may be called best girl. 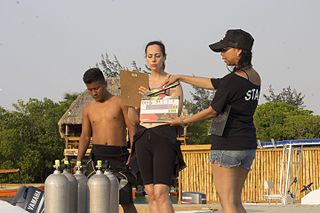 A clapper loader or second assistant camera is part of a film crew whose main functions are that of loading the raw film stock into camera magazines, operating the clapperboard (slate) at the beginning of each take, marking the actors as necessary, and maintaining all records and paperwork for the camera department. The name "clapper loader" tends to be used in the United Kingdom and Commonwealth, while "second assistant camera" tends to be favored in the United States, but the job is essentially the same whichever title is used. The specific responsibilities and division of labor within the department will almost always vary depending on the circumstances of the shoot.

A digital imaging technician chief (DIT) works in the motion picture industry. The DIT position was created in response to the transition from the long established film movie camera medium into the current digital cinema era. The DIT is the camera department crew member who works in collaboration with the cinematographer on workflow, systemization, camera settings, signal integrity and image manipulation to achieve the highest image quality and creative goals of cinematography in the digital realm.

A creative director is a person that makes high-level creative decisions, and with those decisions oversees the creation of creative assets such as advertisements, products, events, or logos. Creative director positions are often found within the television production, graphic design, film, music, video game, fashion, advertising, media, or entertainment industries, but may be useful in other creative organizations such as web development and software development firms as well.

MOS is a standard filmmaking jargon abbreviation used in production reports to indicate an associated film segment has no synchronous audio track.