Last updated July 17, 2020
In this Indian name, the name Rajkumar is a patronymic, not a family name, and the person should be referred to by the given name, Shiva.

Nagaraju Shiva Puttaswamy (born 12 July), known by his screen name Shiva Rajkumar, is an Indian film actor, producer, playback singer and television presenter, best known for his work in Kannada cinema. [2] He is the eldest son of actor Rajkumar. In his career spanning over three decades, Shiva has worked in over 120 films. [2]

After graduating with a Bachelor of Science in Chemistry, Shiva made his debut screen appearance in Singeetham Srinivas Rao's Anand (1986), which fetched him the Cinema Express Award for Best Actor. His first three films, Anand, Ratha Sapthami (1986) and Mana Mechchida Hudugi (1987) were all highly successful, earning him the title Hat-trick Hero coined by the media and his fans. [3] [4]

Shiva has worked in the film industry for over 30 years, featuring in films such as Anand , Ratha Sapthami (1986), Om (1995), Janumada Jodi , Nammoora Mandara Hoove , A.K. 47 , Jogi , Bhajarangi , Mufti , Shivalinga and Tagaru which became milestones in the Kannada film industry and made records at the box office. In 2010, he made his television debut with the talk show Naaniruvude Nimagagi, aired on Zee Kannada. [5] Shiva worked as a co-producer for a web series named Hate You Romeo which was shot in Vietnam. [6]

Shiva Rajkumar was born in Madras (now Chennai), Tamil Nadu, to actor Rajkumar and film producer Parvathamma as the first of five children. His two brothers are Raghavendra Rajkumar, a film producer and Kannada actor and Puneeth Rajkumar, an actor in Kannada cinema. Shiva did his schooling in T. Nagar, Chennai and then studied at the New College, Chennai. [7]

On the insistence of film director K. Balachander, Shiva joined an acting school in Chennai after completing his graduation from Madras University in 1983. After getting trained in Kuchipudi dance from Vempetti Chinni Sathyam in Chennai during his college days, he made an entry into the Kannada film industry with Anand . [4]

Shiva married Geeta, the daughter of the former Chief Minister of Karnataka, S. Bangarappa. The couple have two daughters: Niveditha and Nirupama. [8]

He is the Brand Ambassador of Royal Challengers Bangalore for their 11th Season of Indian Premier League . He was the second Kannada actor to buy Maruti 800. [9]

Shiva started his acting career with the film Anand in 1986. [4] In his career spanning over 30 years, he acted in a variety of roles. The most notable movies of his career are Janumada Jodi , Jogi , Anand , Ratha Sapthami , Nammoora Mandara Hoove , Om and Chigurida Kanasu . [4] He acted in Sugreeva , which was shot in 18 hours. His Om , directed by Upendra, set a trend of gangster movies in Kannada and other film industries in India. It continues to be shown even to this day. [10]

His film Cheluveye Ninne Nodalu was shot at the 7 wonders of the world. [11] His 100th movie, Jogayya , is the sequel to his blockbuster Jogi . [12]

Bhajarangi (2013) was a box-office success, and went on to run for more than 100 days. The film was released in Karnataka, Maharashtra, Andhra Pradesh and Tamil Nadu. It was released in 212 theatres in the state of Karnataka alone.

He was praised for his versatility. [13]

Shiva has won four Filmfare and four state awards in the best actor category. He has also won numerous Cine-Express, Sirigannada and ETV awards. He has lent his name for creating awareness for social causes and charity. On his birthday, "Shivarajkumar Suvarana Mahotsava Abhinandana Samithi" was formed for charity. [18]

Kannada cinema, also known as Sandalwood or Chandanavana, is the segment of Indian cinema dedicated to the production of motion pictures in the Kannada language widely spoken in the state of Karnataka. The 1934 film Sati Sulochana directed by Y. V. Rao was the first talkie film in the Kannada language. It was also the first film starring Subbaiah Naidu, and was the first motion picture screened in the erstwhile Mysore Kingdom. The film was produced by Chamanlal Doongaji, who in 1932 founded South India Movietone in Bengaluru.

Upendra, is an Indian filmmaker, actor and politician known for his work in Kannada cinema. 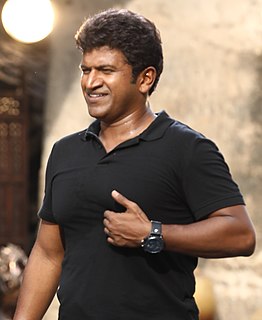 Puneeth Rajkumar is an Indian film actor, playback singer, anchor and producer who works primarily in Kannada cinema. He has been a lead actor in 28 films; as a child, he appeared in films featuring his father, Rajkumar. His performances in Vasantha Geetha (1980), Bhagyavantha (1981), Chalisuva Modagalu (1982), Eradu Nakshatragalu (1983), Bhakta Prahaladha, Yarivanu and Bettada Hoovu (1985) were praised. He won the National Film Award for Best Child Artist for his role of Ramu in Bettada Hoovu. He also won Karnataka State Award Best Child artist for Chalisuva Modagalu and Yeradu Nakshatragalu. Puneeth's first lead role was in 2002's Appu .

Yogaraj Bhat is an Indian Kannada film director, lyricist, producer and screenwriter. He is most predominantly known for the 2006 film Mungaru Male. The film recorded the highest box-office collections in the history of Kannada cinema and currently holds the record for the longest running film at a multiplex. He is considered as a cult filmmaker in the industry who brought a new wave of freshness to cinemas through his films, dialogues and songs. Bhat is given the credit of introducing some of the very talented technicians and artists to the film industry. 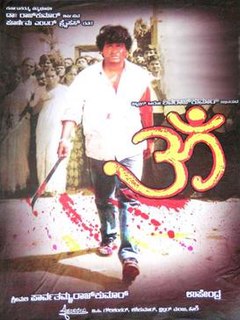 Om, stylized as ॐ, is a 1995 Indian Kannada crime drama film written and directed by Upendra. The film was produced by Parvathamma Rajkumar under the production company Sri Vajreshwari Combines. The film stars Shiva Rajkumar and Prema in lead roles with Srishanthi, G. V. Shivanand, Sadhu Kokila in supporting roles with real life gangsters - Bekkina Kannu Rajendra, Tanveer, Korangu Krishna and Jedaralli Krishnappa - portraying the role of gangsters in a small but important portion of the movie. 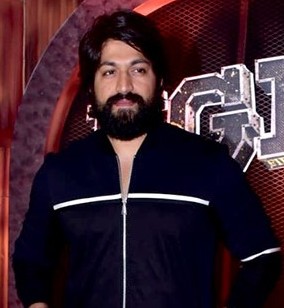 Naveen Kumar Gowda, known by the stage name Yash, is an Indian film actor from Kannada cinema. He is known for his roles in the movies Rajadhani, Mr. and Mrs. Ramachari, Kirataka, Googly (film) and K.G.F: Chapter 1. His latest film, K.G.F: Chapter 2, is scheduled to be released on October 23, 2020. 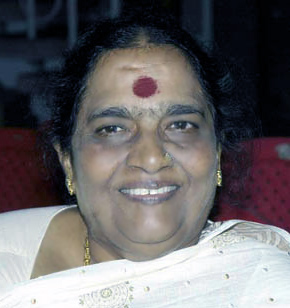 Pudipeddi Ravi Shankar also known as Sai Ravi is an Indian film actor, dubbing artist, director and writer. He rose to fame with the 2011 film Kempe Gowda starring Sudeep. He predominantly acts in Kannada films and has also acted in a few Telugu and Tamil films. He dubbed for over 2600 films with more than 1000 films each in Telugu and Tamil languages. He dubbed for over 150 Kannada films.

Parul Yadav is an Indian film actress and producer, who has appeared in South Indian films, primarily in Kannada along with a few Malayalam and Tamil films. She made her acting debut with Tamil film Dreams, starring Dhanush and Diya. With the four upcoming south remakes of the Bollywood film "Queen", Parul is debuting as the Co-Producer for all the four films and also has acted in the Kannada Version Butterfly.

M. S. Rajashekar was an Indian Kannada film director based in Bangalore. He made his directorial debut with Dhruva Thare starring Dr. Rajkumar which earned the Karnataka State Award for Second Best Film. His second movie Anuraga Aralithu was remade in Tamil, Telugu and Hindi. He went on to make successful films like Ratha Sapthami and Nanjundi Kalyana.

Bhajarangi is a 2013 Indian Kannada-language fantasy action film starring Shiva Rajkumar and Aindrita Ray in the lead roles. Directed by choreographer-turned-director Harsha, the film was released on 12 December 2013 and received positive response from critics. Bhajarangi collected a total of ₹35.5 crores in its 25-day run and became the second highest-grossing Kannada film of 2013. The film was declared a blockbuster at the box office.

Ratha Sapthami is a 1986 Indian Kannada romantic musical film directed by M. S. Rajashekar and produced by S. A. Govindaraj. It stars Shivarajkumar in his second venture after Anand. Debutant actress Asha Rani and playwright Parvathavani star in the lead roles. The musical score was composed by Upendra Kumar, while the lyrics, screenplay and dialogues were written by Chi. Udaya Shankar. P. Vasu was the co-screen play writer of this movie. The story is based on a Kannada novel of the same name by Vidyullatha Sasanoor. Ratha Sapthami opened on 12 December 1986 and was declared a musical blockbuster. 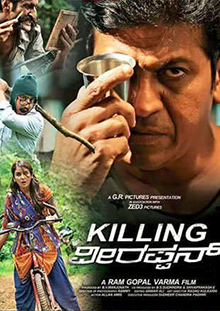 Killing Veerappan is a 2016 Indian Kannada-language docudrama film written by K. Balaji and directed by Ram Gopal Varma. The film is based on the events leading to Operation Cocoon to capture or kill Indian bandit Veerappan. Featuring Shiva Rajkumar in the central role touted to be based on N. K. Senthamarai Kannan, the then Superintendent of police, with the Indian Special Task Force, and the spy who masterminded Operation Cocoon.

Nabha Natesh is an Indian film actress who appears predominantly in Kannada and Telugu films. She starred in the commercially successful film iSmart Shankar in 2019.

Manvita Kamath is an Indian film actress. She has established a career in Kannada cinema. She has received one SIMA Debut Award for Kendasampige. She started her career as a Radio Jockey in Radio Mirchi and made a switch to acting through the Kannada film Kendasampige (2015) directed by Duniya Soori.

Shraddha Srinath is an Indian film actress who predominantly appears in Kannada, Tamil and Telugu films. She gained wide acclaim for her role in the Kannada psychological thriller U Turn (2016) for which she won the Filmfare Award for Best Actress and also for her performances in Jersey, Urvi, Vikram Vedha, Nerkonda Paarvai and Operation Alamelamma. For the latter, she won Filmfare Award for Best Actress (Critics) – Kannada award. She won the Zee Cine Award Telugu 2020 as the Best find of the year - female.

Honnavalli Krishna is an Indian film actor in the Kannada film industry. Some of the notable films of Honnavalli Krishna as an actor include Ratha Sapthami (1986), Aasegobba Meesegobba (1990), Bhootayyana Maga Ayyu (1974), Janumada Jodi (1996).