The first Sun-1 workstation was sold to Solo Systems in May 1982. [1] The Sun-1/100 was used in the original Lucasfilm EditDroid non-linear editing system.

The Sun-1 workstation was based on the Stanford University SUN workstation designed by Andy Bechtolsheim (advised by Vaughan Pratt and Forest Baskett), a graduate student and co-founder of Sun Microsystems. At the heart of this design were the Multibus CPU, memory, and video display cards. The cards used in the Sun-1 workstation were a second-generation design with a private memory bus allowing memory to be expanded to 2 MB without performance degradation.

By using the Motorola 68000 processor tightly coupled with the Sun-1 MMU the Sun 68000 CPU board was able to support a multi-tasking operating system such as UNIX. It included an advanced Sun designed multi-process two-level memory management unit with facilities for memory protection, code sharing and demand paging of memory. The Sun-1 MMU was necessary because the Motorola 68451 MMU did not always work correctly with the 68000 and could not always restore the processor state after a page fault.

The CPU board included 256 KB of memory which could be replaced or augmented with two additional memory cards for a total of 2 MB. Although the memory cards used the Multibus form factor, they only used the Multibus interface for power; all memory access was via the smaller private P2 bus. This was a synchronous private memory bus that allowed for simultaneous memory input/output transfers. It also allowed for full performance zero wait state operation of the memory. When installing the first 1 MB expansion board either the 256 Kb of memory on the CPU board or the first 256 KB on the expansion board had to be disabled. [2]

The CPU board included a fully compatible Multibus (IEEE 796 bus). It was an asynchronous bus that accommodated devices with various transfer rates while maintaining maximum throughput. It had 20 address lines so it could address up to 1 MB of Multibus memory and 1 MB of I/O locations although most I/O devices only decoded the first 64 KB of address space. The Sun CPU board fully supported multi-master functionality that allowed it to share the Multibus with other DMA devices. [3]

The keyboard was a Micro Switch 103SD30-2, or a KeyTronic P2441 for the German market. The memory-mapped, bit-mapped frame buffer (graphics) board had a resolution of 1024×1024 pixels, but only 1024×800 was displayed on the monitor. The graphics board included hardware to accelerate raster operations. A Ball model HD17H 17-inch video display monitor was used. An Ethernet board was available, originally implementing the 3 Mbit/s Xerox PARC Ethernet specification, which was later upgraded to the 3Com 10 Mbit/s version. An Interphase SMD 2180 disk controller could be installed to connect up to four Fujitsu 84 MB M2313K or CDC 16.7 MB (8.35 MB fixed, 8.35 MB removable) 9455 Lark drives. All of the boards were installed in a 6 or 7-slot Multibus card cage.

Later documentation shows that a 13- or 19-inch color display was available. The color frame buffer had a resolution of 640×512 pixels, with 640×480 displayed on the monitor. The board could display 256 colors from a palette of 16 million. ½-inch 9-track reel-to-reel tape drives and QIC-02 ¼-inch cartridge tape drives were also added to the offering.

There was also a second generation Sun-1 CPU board referred to as the Sun-1.5 CPU board. [4]

Sun-1 systems upgraded with Sun-2 Multibus CPU boards were identified with a U suffix to their model number. 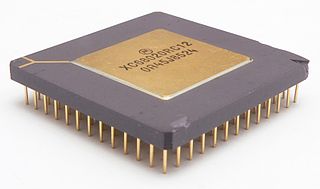 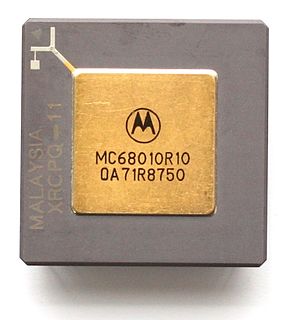 The 88000 is a RISC instruction set architecture developed by Motorola during the 1980s. The MC88100 arrived on the market in 1988, some two years after the competing SPARC and MIPS. Due to the late start and extensive delays releasing the second-generation MC88110, the m88k achieved very limited success outside of the MVME platform and embedded controller environments. When Motorola joined the AIM alliance in 1991 to develop the PowerPC, further development of the 88000 ended.

The Motorola 68000 series is a family of 32-bit complex instruction set computer (CISC) microprocessors. During the 1980s and early 1990s, they were popular in personal computers and workstations and were the primary competitors of Intel's x86 microprocessors. They were best known as the processors used in the early Apple Macintosh, the Sharp X68000, the Commodore Amiga, the Sinclair QL, the Atari ST, the Sega Genesis, the Capcom System I (Arcade), the AT&T UNIX PC, the Tandy Model 16/16B/6000, the Sun Microsystems Sun-1, Sun-2 and Sun-3, the NeXT Computer, NeXTcube, NeXTstation, and NeXTcube Turbo, the Texas Instruments TI-89/TI-92 calculators, the Palm Pilot and the Space Shuttle. Although no modern desktop computers are based on processors in the 680x0 series, derivative processors are still widely used in embedded systems. 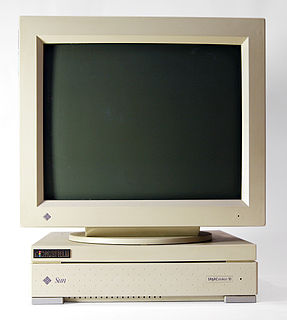 A workstation is a special computer designed for technical or scientific applications. Intended primarily to be used by a single user, they are commonly connected to a local area network and run multi-user operating systems. The term workstation has been used loosely to refer to everything from a mainframe computer terminal to a PC connected to a network, but the most common form refers to the class of hardware offered by several current and defunct companies such as Sun Microsystems, Silicon Graphics, Apollo Computer, DEC, HP, NeXT, and IBM which powered the 3D computer graphics revolution of the late 1990s. 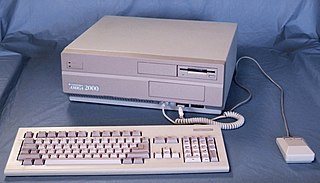 The Amiga 2000, or A2000, is a personal computer released by Commodore in March 1987. It was introduced as a "big box" expandable variant of the Amiga 1000 but quickly redesigned to share most of its electronic components with the contemporary Amiga 500 for cost reduction. Expansion capabilities include two 3.5" drive bays and one 5.25" bay that could be used by a 5.25" floppy drive, a hard drive, or CD-ROM once they became available. 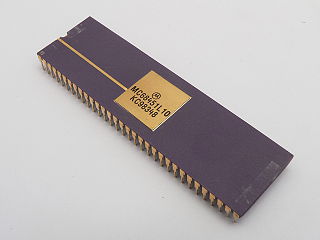 The Macintosh II is a personal computer designed, manufactured, and sold by Apple Computer from March 1987 to January 1990. Based on the Motorola 68020 32-bit CPU, it is the first Macintosh supporting color graphics. When introduced, a basic system with monitor and 20 MB hard drive cost US$5,498. With a 13-inch color monitor and 8-bit display card the price was around US$7,145. This placed it in competition with workstations from Silicon Graphics, Sun Microsystems, and Hewlett-Packard.

SBus is a computer bus system that was used in most SPARC-based computers from Sun Microsystems and others during the 1990s. It was introduced by Sun in 1989 to be a high-speed bus counterpart to their high-speed SPARC processors, replacing the earlier VMEbus used in their Motorola 68020- and 68030-based systems and early SPARC boxes. When Sun moved to open the SPARC definition in the early 1990s, SBus was likewise standardized and became IEEE-1496. In 1997 Sun started to migrate away from SBus to the Peripheral Component Interconnect (PCI) bus, and today SBus is no longer used. 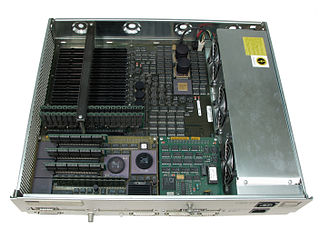 The Atari TT030 is a member of the Atari ST family, released in 1990. It was originally intended to be a high-end Unix workstation, but Atari took two years to release a port of Unix SVR4 for the TT, which prevented the TT from ever being seriously considered in its intended market. 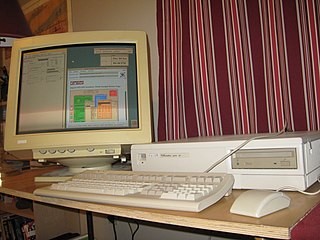 The VAXstation is a discontinued family of workstation computers developed and manufactured by Digital Equipment Corporation using processors implementing the VAX instruction set architecture. VAXstation systems were typically shipped with either the OpenVMS or ULTRIX operating systems. Many members of the VAXstation family had corresponding MicroVAX variants, which primarily differ by the lack of graphics hardware.

Sun-3 is a series of UNIX computer workstations and servers produced by Sun Microsystems, launched on September 9, 1985. The Sun-3 series are VMEbus-based systems similar to some of the earlier Sun-2 series, but using the Motorola 68020 microprocessor, in combination with the Motorola 68881 floating-point co-processor and a proprietary Sun MMU. Sun-3 systems were supported in SunOS versions 3.0 to 4.1.1_U1 and also have current support in NetBSD and Linux. 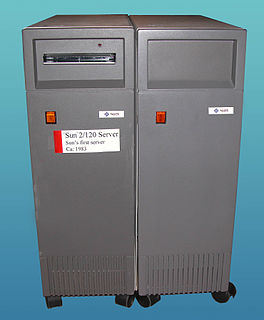 Callan Data Systems, Inc. was an American computer manufacturer founded by David Callan in Westlake Village, California on January 24, 1980. The company was best known for their Unistar range of Unix workstations, and shut down again in 1985.

Torch Computers Ltd was a computer hardware company with origins in a 1982 joint venture between Acorn Computers and Climar Group that led to the development of the Communicator or C-series computer, a system based on the BBC Micro with a Z80 second processor and integral modem, intended as a viewdata terminal. 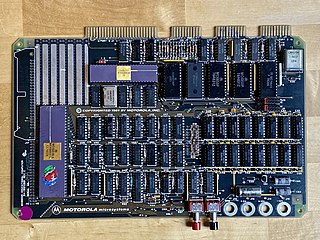 The Motorola 68000 Educational Computer Board (MEX68KECB) was a development board for the Motorola 68000 microprocessor, introduced by Motorola in 1981. It featured the 68K CPU, memory, I/O devices and built-in educational and training software.