In Methodism (inclusive of the holiness movement), a tabernacle is the center of a camp meeting, where revival services occur. [1] [2] Tabernacles may be constructed in a cruciform-shaped fashion and are most often made of wood. [3] [4] Like the interior of many Methodist churches, in the center of the tabernacle is an altar upon which the Eucharist is consecrated; a pulpit stands near it and is used by preachers to deliver sermons. [3] The area of the tabernacle housing the altar and pulpit is delimited by the mourner's bench. [3] Surrounding the tabernacle itself are usually several cabins and/or tents, where people stay while attending the camp meeting. [4]

Methodism is an umbrella term used to describe denominations of Protestant Christianity which follow the line of the Methodist movement. Methodist denominations are historically related and derive their doctrine of practice and belief from the life and teachings of John Wesley. George Whitefield and John's brother Charles Wesley were also significant early leaders in the movement. It originated as a revival movement within the 18th-century Church of England and became a separate denomination after Wesley's death. The movement spread throughout the British Empire, the United States, and beyond because of vigorous missionary work, today claiming approximately 80 million adherents worldwide. 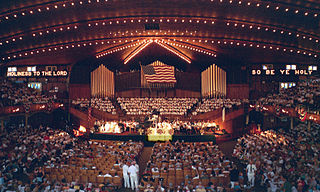 Ocean Grove is an unincorporated community and census-designated place (CDP) located within Neptune Township, Monmouth County, New Jersey, United States. It had a population of 3,342 at the 2010 United States Census. It is located on the Atlantic Ocean's Jersey Shore, between Asbury Park to the north and Bradley Beach to the south. Listed on the National Register of Historic Places, Ocean Grove is noted for its abundant examples of Victorian architecture and the Great Auditorium, acclaimed as "the state’s most wondrous wooden structure, soaring and sweeping, alive with the sound of music".

The Holiness movement involves a set of beliefs and practices which emerged chiefly within 19th-century Methodism, and to a lesser extent other traditions such as Quakerism and Anabaptism. The movement is Wesleyan-Arminian in theology, and is defined by its emphasis on the doctrine of a second work of grace leading to Christian perfection. As of 2015, a number of evangelical Christian denominations, parachurch organizations, and movements emphasize those beliefs as central doctrine. Holiness-movement churches had an estimated 12 million adherents.

The camp meeting is a form of Protestant Christian religious service originating in England and Scotland as an evangelical event in association with the communion season. It was held for worship, preaching and communion on the American frontier during the Second Great Awakening of the early 19th century. Revivals and camp meetings continued to be held by various denominations, and in some areas of the mid-Atlantic, led to the development of seasonal cottages for meetings.

The conservative holiness movement is a loosely defined group of conservative Christian denominations with the majority tracing their origin back to Methodist roots and the teachings of John Wesley, and a minority being Quakers (Friends) that emphasize the doctrine of George Fox, as well as River Brethren who emerged out of the Radical Pietist revival. This movement became distinct from other Holiness bodies in the mid-20th century amid disagreements over modesty in dress, entertainment, and other "old holiness standards" reflective of the related emphases on the Wesleyan-Arminian doctrine of outward holiness or the Quaker teaching on the testimony of simplicity or the River Brethren teaching on nonconformity to the world, depending on the denomination. 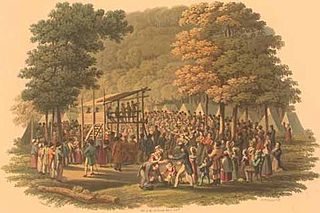 Decision theology is the belief of some evangelical denominations of Christianity, such as the Baptist Churches and Methodist Churches, that individuals must make a conscious decision to "accept" and follow Christ.

The Christian Holiness Partnership is an international organization of individuals, organizational and denominational affiliates within the holiness movement. It was founded in 1867 as the National Camp Meeting Association for Christian Holiness, later changing its name to the National Holiness Association, by which it was known until 1997, when its current name was adopted. Its stated purpose is to promote "the message of scriptural holiness" primarily through evangelistic camp meetings.

Central Oak Heights is an association of cottage owners on 45 acres (0.22 km2) of wooded land in Kelly Township, Union County, Pennsylvania in the United States. It was founded in 1909 as a religious campground and retreat by the Bible Conference Society of Central Pennsylvania of the United Evangelical Church.

Wesleyan Grove is a 34-acre (14 ha) National Historic Landmark District in Oak Bluffs, Massachusetts on the island of Martha's Vineyard. Also known as the Martha's Vineyard Campmeeting Association (MVCMA) or the Campgrounds, it was the first summer religious camp established in the United States. It is famous for its many Carpenter Gothic cottages with Victorian-style, gingerbread trim. 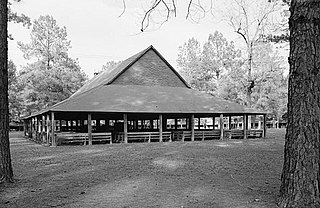 Indian Field Methodist Campground is a camp meeting site for the Methodist Church in Dorchester County, South Carolina. It is on SC Route S-18-73, off US Route 15, about 5 mi (8 km) north of Saint George. Indian Field was built in 1848 and has been a site for religious gatherings for over 160 years. It was named a historic district of the National Register of Historic Places on March 30, 1973.

The Mountain Grove Campground was a campground, active between 1872 and 1901, that formed part of the 19th- to early 20th-century camp meeting movement, where camping was combined with worshiping and listening to preachers. These meetings were often held by Protestants, in this case, Methodists. Mountain Grove Campground was a site and resort on the Danville, Hazleton and Wilkes-Barre Railroad in Black Creek Township, Luzerne County, Pennsylvania, in the United States. It existed for approximately 30 years and was run by the Mountain Grove Camp Meeting Association. A businessman named G.M. Shoop was the original owner of the campground's land. Many prominent citizens of the surrounding area were in the association. During the campground's operation between 1872 and 1901, it was renovated and expanded several times. While the camp meetings that were held there were intended for Methodists, non-Methodists occasionally attended them. 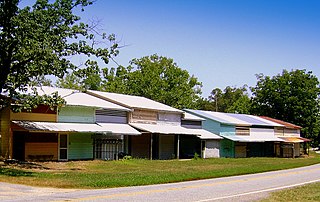 Balls Creek Campground is a historic Methodist camp meeting and national historic district located near Bandy's Crossroads, Catawba County, North Carolina. The district encompasses 138 contributing buildings and 1 contributing site. They include the Arbor, "tents" dating back to the 1850s, a store called "The Shack", and jail dated to the late-19th / early-20th century. The site was established in 1853 and is believed to be one of the largest religious campgrounds in the southern United States. A camp meeting continues to be held there every August, with "tents" selling for as much as $65,000 each.

Chapel Hill Church Tabernacle is a historic Methodist church tabernacle located near Denton, Davidson County, North Carolina. It was built in 1870 and enlarged in the 1920s. It is a one-story, heavy-timber, open-framework building, open on three sides. It has a concrete floor and a gable-on-hip roof. The tabernacle was originally used for the religious services at the annual camp meetings. The tabernacle is located on the grounds of Chapel Hill United Methodist Church, whose congregation dates from 1854.

Center Arbor is a historic Methodist tabernacle located at Center, Davie County, North Carolina. It was built in 1876, and is a large, open, rectangular timber-framed structure four bays wide and eight bays deep. It measures approximately 60 feet wide and 80 feet deep. The tabernacle is associated with Center United Methodist Church and was the site of camp meeting revivals.

The Pleasant Grove Camp Meeting Ground is a historic Methodist camp meeting national historic district located near Waxhaw, Union County, North Carolina. The district encompasses four contributing buildings and one contributing site. The main building is the arbor that dates to 1830. It is an 80 feet long by 60 feet wide open sided frame structure with a gable roof surround on all four sides by pent roof extensions. Located nearby are the church and former schoolhouse, now used as the preacher's dwelling, and the old cemetery. 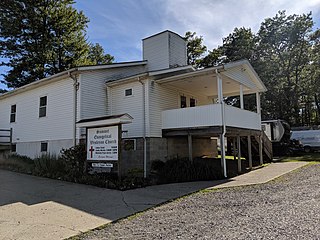 The Reformed Free Methodist Church (RFMC) was a Methodist denomination in the conservative holiness movement.