Terry Gross (born February 14, 1951) [1] is the host and co-executive producer of Fresh Air , an interview-based radio show produced by WHYY-FM in Philadelphia and distributed nationally by NPR. Since joining NPR in 1975, Gross has interviewed thousands of guests. [1] [2]

Gross has won praise over the years for her low-key and friendly yet often probing interview style and for the diversity of her guests. She has a reputation for researching her guests' work largely the night before an interview, often asking them unexpected questions about their early careers. [3]

Terry Gross was born in Brooklyn, [4] and grew up in its Sheepshead Bay neighborhood, the second child of Anne (Abrams), a stenographer, and Irving Gross, [5] who worked in a family millinery business, where he sold fabric to milliners. [6] She grew up in a Jewish family, and all her grandparents were emigrants, her father's parents from Tarnów, Poland and her mother's from the Russian Empire. [7] [8] [5] She said that her family lived in an apartment near Senior's Restaurant, a local landmark. [9] [10] When she was young, people would often ask where Gross came from, assuming that her lack of a heavy Brooklyn accent meant she grew up elsewhere. [9] She has an older brother, Leon J. Gross, who works as a psychometric consultant. [9] [11] [12]

In 1968, Gross graduated from Sheepshead Bay High School. She earned a bachelor's degree in English and a Master of Education degree in communications from the University at Buffalo. [1] While in college, she married her high-school boyfriend who attended the same university; they subsequently divorced. She took a year off from school to hitchhike cross country. [10]

In 1972, Gross started teaching 8th grade at an inner-city public junior high school in Buffalo. [9] She said she was ill-equipped for the job, especially at establishing discipline, and was fired after only six weeks. [13]

Gross began her radio career in 1973 at WBFO, an NPR CPB-funded [14] college [15] station, then broadcasting from the Main Street Campus [15] of the University at Buffalo in Buffalo, New York, where she started out as a volunteer on a show called Woman Power, then co-hosted This is Radio. [14] Typical subjects of these shows were women's rights and public affairs. [1] [16]

In 1975, she moved to WHYY-FM in Philadelphia, Pennsylvania to host and produce Fresh Air, which was a local interview program at the time. In 1985, Fresh Air with Terry Gross went national, being distributed weekly by NPR. It became a daily program two years later. Gross typically conducts the interviews from the WHYY-FM studios in Philadelphia, with her subject at the studio of a local NPR affiliate convenient to them connected via telephone or satellite feed. For the majority of these conversations, Gross is not face-to-face with her subjects. [3] Gross creates a daily show that is an hour long, usually includes two interviews, and is distributed to over 190 NPR stations. The show reaches an audience of millions of daily listeners. [6] Many of the producers and staff on Gross' show have been with her since the late 1970s to 1980s. [9]

She appeared as a guest-voice on The Simpsons as herself, in the episode "The Debarted". During the spring 1998 semester, Gross was a guest lecturer at University of California-Berkeley's Graduate School of Journalism. [3]

In 2015 she appeared on Wait Wait... Don't Tell Me and played the game "Not My Job", answering questions about Hulk Hogan. [17]

The San Francisco Chronicle wrote that Gross's interviews are "a remarkable blend of empathy, warmth, genuine curiosity, and sharp intelligence." [18] Gross prides herself on preparation; prior to interviewing guests, she reads their books, watches their movies, and/or listens to their CDs. [19] The Boston Phoenix opined that "Terry Gross... is almost certainly the best cultural interviewer in America, and one of the best all-around interviewers, period. Her smart, thoughtful questioning pushes her guests in unlikely directions. Her interviews are revelatory in a way other people's seldom are." [13]

Gross said that when she first started working in radio, her voice was much higher with anxiety. She said she has worked to relax her voice and to a more natural, deeper tone. [9] [20] Much has been written about Gross's voice, [19] and the precision of her use of language has been the subject of much analysis. [21] [22]

There have been some occasions when interviews have not gone smoothly. Gross asked Nancy Reagan about the lack of funding and mishandling of HIV/AIDS by her husband, President Ronald Reagan, which was not well received. Several guests, including Lou Reed, Jann Wenner, Faye Dunaway, Monica Lewinsky, and Adam Driver, have stopped their interviews prematurely. [23] [24] [25]

While she was in college in the late 1960s, Gross was married for about a year to a man she knew from high school, with whom she had been living previously. Gross said she dropped out of college in her sophomore year to hitchhike with him across the country before they were married. [9] She proceeded to obtain a divorce by the time she started her radio career in 1973. [3] [36] [37]

Gross has been married to Francis Davis, jazz critic of The Village Voice, since 1994. They have been together since 1978. [9] [23] [38] Davis is Catholic, and Gross is Jewish, but neither is practicing. [7] They reside in Philadelphia, Pennsylvania, and share a passion for music. [23] They have no children, which Gross has said was a deliberate choice on their part. [39] [40] 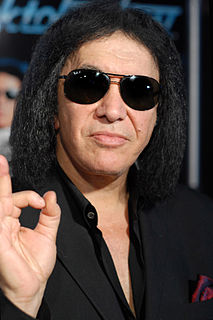 Gene Klein, known professionally as Gene Simmons, is an Israeli-American musician, singer, songwriter, record producer, entrepreneur, actor, author and television personality. Also known by his stage persona The Demon, he is the bassist and co-lead singer of Kiss, the rock band he co-founded with lead singer and rhythm guitarist Paul Stanley in the early 1970s. 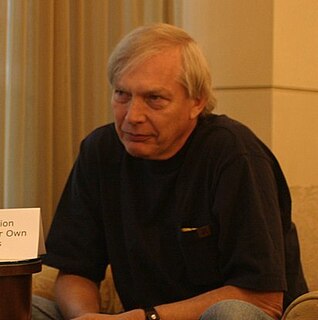 Robert Alan "Bob" Edwards is an American broadcast journalist, a Peabody Award-winning member of the National Radio Hall of Fame. He gained reputation as the first host of National Public Radio's flagship program, Morning Edition. Starting in 2004, Edwards then was the host of The Bob Edwards Show on Sirius XM Radio and Bob Edwards Weekend distributed by Public Radio International to more than 150 public radio stations. Those programs ended in September 2015. Edwards currently hosts a podcast for AARP.

Fresh Air is an American radio talk show broadcast on National Public Radio stations across the United States since 1985. It is produced by WHYY-FM in Philadelphia, Pennsylvania. The show's host is Terry Gross. As of 2017, the show was syndicated to 624 stations and claimed nearly 5 million listeners. The show is fed live weekdays at 12:00 noon ET. In addition, some stations carry Fresh Air Weekend, a re-programming of highlights of the week's interviews. In 2016, Fresh Air was the most-downloaded podcast on iTunes. 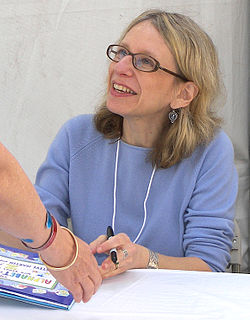 Douglas John "Doug" McIntyre was the host of McIntyre In The Morning on KABC 790 Los Angeles. He retired after 22 years in broadcasting on December 14th, 2018. McIntyre is a long-time columnist for the Southern California News Group which includes the Los Angeles Daily News. Known for his active involvement in local politics and his passion for jazz and the Great American Songbook, McIntyre's background includes work as television writer-producer with credits including Married... with Children, WKRP in Cincinnati, Full House, Mike Hammer, and the critically acclaimed PBS series, Liberty's Kids, which earned McIntyre a Humanitas Prize nomination. With his wife, actress Penny Peyser, McIntyre wrote, produced, and directed the feature-length documentary film, Trying to Get Good: The Jazz Odyssey of Jack Sheldon, released in 2008. Doug is executive producer of Penny Peyser's 2016 feature documentary, Stillpoint.

WHYY-FM is a public FM radio station licensed to serve Philadelphia, Pennsylvania. Its broadcast tower is located in the city's Roxborough neighborhood at while its studios and offices are located on Independence Mall in Center City, Philadelphia. The station, owned by WHYY, Inc., is a charter member of National Public Radio (NPR) and contributes several programs to the national network. 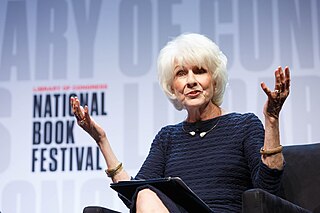 Diane Rehm is a retired American public radio talk show host. Her program, The Diane Rehm Show, was distributed nationally and internationally by National Public Radio. The show was produced at WAMU, which is licensed to American University in Washington, D.C.

Scott Simon is an American journalist and the host of Weekend Edition Saturday on NPR.

Liane Hansen is an American journalist and radio personality who was senior host of the National Public Radio newsmagazine Weekend Edition Sunday until her retirement in May 2011. Her experience in broadcast journalism includes working as a reporter, producer, and host for local and national programs. 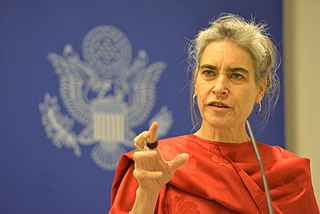 Sarah Chayes is a former senior associate in the Democracy and Rule of Law Program at the Carnegie Endowment for International Peace, leaving in order to pursue a new writing project. A former award-winning reporter for National Public Radio, she also served as special advisor to the Chairman of the Joint Chiefs of Staff.

Scott Spencer is an American author who has written thirteen novels. He also wrote the screenplay for the 1993 movie Father Hood. Two of Spencer's novels, Endless Love and Waking the Dead, have been adapted into films. Endless Love was first adapted into a motion picture by Franco Zeffirelli in 1981, and a second adaptation by Shana Feste was released in 2014. Waking the Dead was produced by Jodie Foster and directed by Keith Gordon in 2000. The novels Endless Love and A Ship Made of Paper have both been nominated for the National Book Award, with Endless Love selling over 2 million copies. Spencer has heavily panned both film adaptations of Endless Love.

Faith Coley Salie is an American journalist, writer, actress, comedian, television and radio host and Rhodes scholar who grew up in Georgia. She is a contributor to CBS Sunday Morning and a panelist on NPR’s Wait Wait... Don't Tell Me!. She hosts Science Goes To The Movies on PBS and CUNY TV. Her first book, Approval Junkie, a collection of humorous essays, was published by Crown in April 2016.

Dave Davies is an American print and broadcast journalist. He graduated from the University of Texas in 1975.

Larry Tye is an American non-fiction author and journalist known for his biographies of notable Americans including Edward Bernays (1999) Satchel Paige (2009) and Bobby Kennedy (2016).

Marjorie S. "Marty" Moss-Coane is an American radio personality and executive. She is the host and executive producer of Radio Times with Marty Moss-Coane, in Philadelphia. Moss-Coane has worked at WHYY-FM since 1983, when she began working as an associate producer on Fresh Air. She became a host when Fresh Air went national in 1987.

Brent W. Jeffs is an author, advocate, and member of the influential Jeffs family in the Fundamentalist Church of Jesus Christ of Latter-Day Saints.