The Thomas Shiels House is located in Dallas, Texas.

This is a list of the National Register of Historic Places listings in Dallas County, Texas.

Hotel Adolphus is an upscale hotel and Dallas Landmark in the Main Street District of Downtown Dallas Dallas, Texas. It was for several years the tallest building in the state. In addition, the Adolphus Hotel was featured in Victor H. Green's Negro Motorist Green Book in 1936. Green published his Green Book, as it is commonly known, as a guide for blacks seeking recreation, and as a road map for black travelers to avoid fatal encounters with whites during the Jim Crow era. Effectively, the Green Book informed blacks not only where they should visit ― which hotels and restaurants and hair salons ― but quite literally where they could go if they valued their lives. In the early 20th century, the Adolphus Hotel was a resting place for the Ku Klux Klan, which routinely terrorized blacks in the area. The hotel also enforced segregation through the 1950s. Today, the hotel is part of Autograph Collection.

Wheatley Place is a neighborhood in south Dallas, Texas, that is designated as a historic district on the National Register of Historic Places (NRHP) and as a somewhat smaller Dallas Landmark District by the city. Included among the buildings that compose the historic district is the Juanita J. Craft Civil Rights House, a museum that was the former home of Dallas civil rights pioneer, Juanita Craft. The house is a Recorded Texas Historic Landmark and is included within the NRHP district but not the municipal landmark district.

The Magnolia Hotel is a 29-story, Beaux-Arts style, upscale hotel in the Main Street District of downtown Dallas, Texas, that for many years was the tallest building in the state after surpassing the Adolphus Hotel. The structure is a Dallas Landmark and is listed on the National Register of Historic Places.

The West End Historic District of Dallas, Texas, is an historic district that includes a 67.5-acre (27.3 ha) area in northwest downtown, generally north of Commerce, east of I-35E, west of Lamar and south of Woodall Rodgers Freeway. It is south of Victory Park, west of the Arts, City Center, and Main Street districts, and north of the Government and Reunion districts. A portion of the district is listed on the U.S. National Register of Historic Places as Westend Historic District. A smaller area is also a Dallas Landmark District. The far western part of the district belongs to the Dealey Plaza Historic District, a National Historic Landmark around structures and memorials associated with the Assassination of John F. Kennedy. 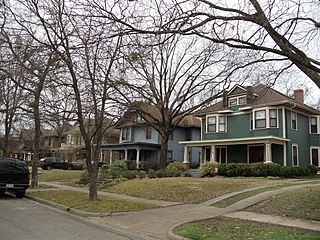 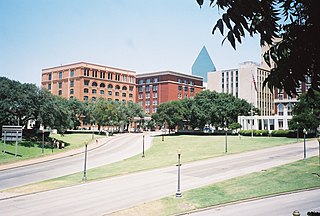 The Dal-Tex Building is a seven-story office building located at 501 Elm Street in the West End Historic District of downtown Dallas, Texas. The building is located on the northeast corner of Elm and North Houston Streets, across the street from the Texas School Book Depository in Dealey Plaza, the scene of the assassination of United States President John F. Kennedy on November 22, 1963. The Dal-Tex Building, sometimes called the Dallas-Textiles Building, the Dal-Tex Market Building, or the Dal-Tex Mart Building, was a center of the textile business in Dallas.

Lake Cliff is a neighborhood in the northern part of the Oak Cliff area of Dallas, Texas (USA). It surrounds Lake Cliff, a small freshwater lake. 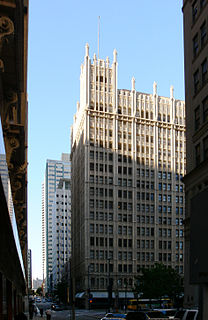 The Kirby Building, historically known as the Busch Building, is a 17-story skyscraper in the Main Street District of Downtown Dallas. The structure was completed in 1913 by beer magnate Adolphus Busch to accompany his nearby Hotel Adolphus. The building became vacant with many older buildings during the economic downturn of the 1980s. While the building was symbolic of downtown's crash in the 1980s, it also served as a symbol of the start of the resurrection as it became the first high-rise to be converted from office use to residential apartments. The structure is a Dallas Landmark and listed on the National Register of Historic Places.

One Main Place is a mixed-use skyscraper hotel and office building at 1201 Main Street in Dallas, Texas. The building rises 445 feet. It contains 33 above-ground floors, and was completed in 1968. One Main Place currently stands as the 27th-tallest building in the city. The architectural firm who designed the building was Skidmore, Owings & Merrill, who also designed the Willis Tower and John Hancock Center in Chicago and the Burj Khalifa in Dubai. Gordon Bunshaft was the lead designer of One Main Place and a few of his notable buildings include Lever House in New York, the Beinecke Rare Book and Manuscript Library at Yale University, the Hirshhorn Museum and Sculpture Garden in Washington, D.C. The building was listed on the National Register of Historic Places in 2015.

The Dallas County Courthouse, built in 1892 of red sandstone with rusticated marble accents, is a historic governmental building located at 100 South Houston Street in Dallas, Texas. Also known as the Old Red Courthouse, it became the Old Red Museum, a local history museum, in 2007. It was designed in the Richardsonian Romanesque style of architecture by architect Max A. Orlopp, Jr. of the Little Rock, Arkansas based firm Orlopp & Kusener. In 1966 it was replaced by a newer courthouse building nearby. On December 12, 1976, it was added to the National Register of Historic Places. In 2005–2007 the building was renovated.

The Dallas Holocaust Museum/Center for Education & Tolerance is a Holocaust museum located in Dallas, Texas. In 1977, 125 Jewish Holocaust survivors and North Texas residents joined together and formed an organization called Holocaust Survivors in Dallas. In 1984, the survivors along with national and North Texas benefactors established The Dallas Memorial Center for Holocaust Studies. The museum was located at the Dallas Jewish Community Center in North Dallas. In January 2005, the Memorial Center changed its name to the Dallas Holocaust Museum/Center for Education & Tolerance, and moved to its present, temporary location in downtown Dallas. Plans have been made for its permanent location in the historic West End area of downtown Dallas, Texas.

The Sam Rayburn House Museum is a historic house museum at 890 West Texas State Highway 56 in Bonham, Fannin, Texas. Built in 1916, it was home to Sam Rayburn (1882-1961), a famously effective Speaker of the United States House of Representatives. It was declared a National Historic Landmark in 1976. Since 1972, it has been operated as a museum and state historic site by the Texas Historical Commission.

The Dallas Municipal Building is a Dallas Landmark located along S. Harwood Street between Main and Commerce Street in the Main Street District of downtown Dallas, Texas that served as the city's fourth City Hall. The structure is also a Recorded Texas Historic Landmark and a contributing property in the Harwood Street Historic District, located across the street from Main Street Garden Park.

The Dallas Downtown Historic District is a 90.8-acre (36.7 ha) area in downtown Dallas, Texas, United States that was designated a historic district in 2006 to preserve the diverse architectural history of the area.

The Dallas Scottish Rite Temple is a monumental structure in the Farmers Market District of downtown Dallas, Texas. Constructed in 1913 as an official headquarters for use by the Scottish Rite Masons and other local Masonic lodges, it is a fine example of early 20th century Beaux Arts Classical architecture in Texas. The structure, a Dallas Landmark and Recorded Texas Historic Landmark, is listed on the National Register of Historic Places and is a contributing property in the Harwood Street Historic District.

This is a list of the National Register of Historic Places listings in Wichita County, Texas.

Jacob and Eliza Spake House is located at 2600 State Street in Dallas, Texas, United States. The house was added to the National Register of Historic Places on November 21, 1985.

The Alfred Horatio Belo House is a historic mansion in Dallas, Texas, USA. It was built for Colonel Alfred Horatio Belo, a veteran of the Confederate States Army and founder of The Dallas Morning News, circa 1900. It remained in the Belo family until 1977, when it was acquired by the Dallas Bar Association.