Between 2005 and 2009, Wieser chaired the OECD Committee on Financial Markets. [1] Wieser became Vice-President of Economic and Financial Committee of the European Union (EFC) in November 2005. He went on to serve his first term as the President of the committee from March 2009 to March 2011. [1]

Prior to October 2011, Wieser was Director General for Economic Policy and Financial Markets in the Ministry of Finance, Austria. [1] In October 2011, Wieser became the full time president of the Eurogroup Working Group (EWG), an advisory body to the Eurogroup. [2] [1] In January 2012, Wieser started his second term as the president of the EFC [1] [3] of the European Union, he retain presidency of the EWG. [1]

I am something like a marriage counsellor who tries – between two or several partners, if one accepts polygamy – to achieve a common understanding of things and seeks to make sure that perational implementation gets underway

The EFC/EWG prepares Economic and Financial Affairs Council (ECOFIN) decisions [5] particularly on eurozone affairs, as the informal eurozone bodies were gradually given more official roles. [6] In 2014, Wieser stated that Europe was having an economic recovery but competitiveness should be strengthened, bank balance sheets should be improved and fiscal deficits reduced. [7]

In 2019, Wieser chaired a “High-Level Group of Wise Persons” appointed by the Council of the European Union and charged with drafting recommendations on how to reform existing financial instruments for sustainable development managed by the European Commission, the European Investment Bank (EIB) and the European Bank for Reconstruction and Development (EBRD). [8] [9]

Former Greek minister of finance Yanis Varoufakis has claimed that Wieser holds considerable power within the Eurogroup, stating he "has been part of every policy and every coup that resulted in Greece’s immolation and Europe’s ignominy." [11] Sven Giegold, MEP of the German Green Party, has stated in his correspondence with Varoufakis that Wieser "is acting under the auspices of representatives of all finance ministries in the Eurozone which form the Eurozone Working Group.[ sic ]" [12]

Reflecting on the actions of the Troika in an interview with German journalists, Wieser blamed an excessively high minimum wage in Greece for the decrease in employment in the exporting sector. [13]

The Eurogroup is the recognised collective term for informal meetings of the finance ministers of the eurozone—those member states of the European Union (EU) which have adopted the euro as their official currency. The group has 19 members. It exercises political control over the currency and related aspects of the EU's monetary union such as the Stability and Growth Pact. The current President of the Eurogroup is Paschal Donohoe, the Minister for Finance of Ireland. 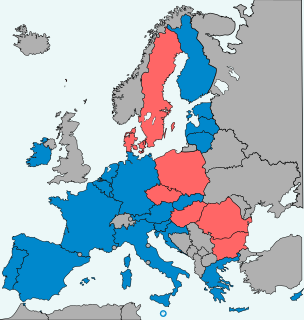 The European Stability Mechanism (ESM) is an intergovernmental organization located in Luxembourg City, which operates under public international law for all eurozone Member States having ratified a special ESM intergovernmental treaty. It was established on 27 September 2012 as a permanent firewall for the eurozone, to safeguard and provide instant access to financial assistance programmes for member states of the eurozone in financial difficulty, with a maximum lending capacity of €500 billion. 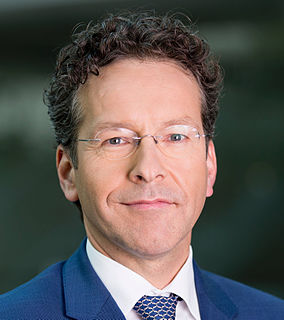 Jeroen René Victor Anton Dijsselbloem is a Dutch politician and economist serving as Chairman of the Dutch Safety Board since 1 May 2019. A member of the Labour Party (PvdA), he has also been Chairman of the supervisory board of Wageningen University since 1 April 2019.

Ioannis "Yanis" Varoufakis is a Greek economist and politician. A former academic, he served as the Greek Minister of Finance from January to July 2015 under Prime Minister Alexis Tsipras. He has been Secretary-General of MeRA25, a left-wing political party, since he founded it in 2018. A former member of Syriza, Varoufakis was a member of the Hellenic Parliament for Athens B from January to September 2015; he regained a parliamentary seat in July 2019.

A Greek withdrawal from the eurozone was a hypothetical scenario, debated mostly in the early to mid 2010s, under which Greece would withdraw from the Eurozone to deal with the Greek government-debt crisis of the time. This conjecture was given the nickname "Grexit", a portmanteau combining the English words 'Greek' and 'exit', and which has been expressed in Greek as ελλέξοδος. The term "Graccident" was coined for the case that Greece exited the EU and the euro unintentionally. These terms first came into use in 2012 and have been revitalised at each of the bailouts made available to Greece since then. 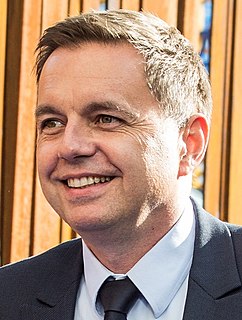 Peter Kažimír is the current Governor of the National Bank of Slovakia. He previously served as the country's Finance Minister under prime ministers Robert Fico and Peter Pellegrini. He was a senior member of the social-democratic SMER-SD party, but resigned after assuming governorship of NBS. 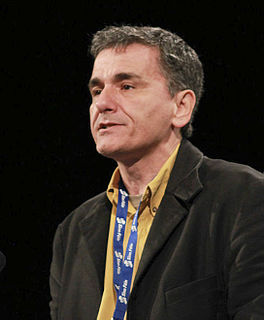 Euclid Stefanou Tsakalotos is a Greek economist and politician who was Minister of Finance of Greece from 2015 to 2019. He is also a member of the Central Committee of Syriza and has represented Athens B in the Hellenic Parliament since May 2012.

Following the January 2015 Greek election, the leader of the largest party SYRIZA, Alexis Tsipras, was charged with forming a coalition government.

Nicholas Theocarakis, also transcribed as Nikos Theocharakis, is a Greek economist and professor of economics at Athens University. He is the author of several books and contributions on economic theory and history of economic thought.

The European troika is a term used, especially in the media, to refer to the decision group formed by the European Commission (EC), the European Central Bank (ECB) and the International Monetary Fund (IMF). The usage arose during the European debt crisis in the context of the "bailouts" of Cyprus, Greece, Ireland and Portugal necessitated by their prospective insolvency caused by the world financial crisis of 2007–2008.

The Economic and Financial Committee (EFC) is a European Union advisory body, defined by the article 134 of the Treaty on the Functioning of the European Union. Its president is also the president of the Eurogroup Working Group, which prepares dossiers for approval by the Eurogroup, whose decisions are generally ratified by ECOFIN.

Eurogroup Working Group (EWG) is an advisory body to the Eurogroup of the European Union. It is composed of representatives of the euro area member states of the Economic and Financial Committee (EFC), the European Commission and the European Central Bank. The President of the Eurogroup Working Group is Tuomas Saarenheimo, who entered the job in April 2020 and is also the President of the EFC. Previously, the posts had been held by Hans Vijlbrief and Thomas Wieser. 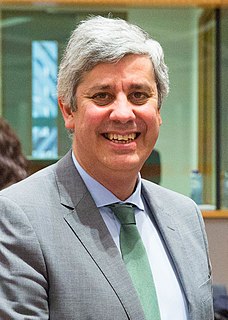 Mário José Gomes de Freitas Centeno is a Portuguese economist, university professor, and politician. Since 2015, he has been Minister of Finance in the government of Prime Minister António Costa of Portugal. He was the president of the Eurogroup and chairman of the board of Governors of the European Stability Mechanism from 2018 to 2020. Previously, he was a board member economist of the Bank of Portugal. On 9 June 2020, he announced his resignation from the Ministry of Finance, effective 15 June.

Adults in the Room is a 2019 French-Greek film directed by Costa-Gavras. It is based on the book Adults in the Room: My Battle with Europe's Deep Establishment by Yanis Varoufakis about the 2015 Greek bailout. It is Gavras' first feature film that was shot in Greece.

Tuomas Saarenheimo is a Finnish civil servant, who currently serves as the President of the Eurogroup Working Group.