It is located on the northern edge of the A690 (Durham Road), and borders with Grindon to the north and Herrington to the south, and the A19 to the west.

Most of the streets in Thorney Close begin with the letter "T". Such as, Telford Road, Twickenham Road, Thorney Close Road, Taunton Square & Tadcaster Road.

The estate was the feature location of a short-horror story "The Curse of Thorney Close" which embedded themes of poverty, crime and desperation into a tale of witchcraft in the area. [4] [5] 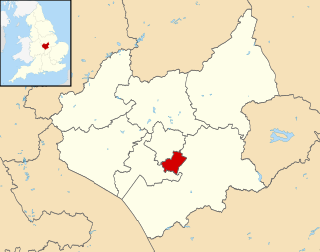 Shard End is an area of Birmingham, England. It is also a ward within the formal district of Hodge Hill. Shard End borders Castle Bromwich to the north and Kingshurst to the east which are situated in the northern part of the neighbouring Metropolitan Borough of Solihull.

Tottenham Green is an electoral ward within the London Borough of Haringey in Greater London, England.

Southmead is a northern suburb and council ward of Bristol, in the southwest of England. The town of Filton, and the Bristol suburbs of Monks Park, Horfield, Henleaze and Westbury on Trym lie on its boundaries.

Jaywick is a coastal village in the Tendring district of Essex, England, 2 miles (3 km) west of Clacton-on-Sea. It lies on the North Sea coast of England, 60 miles (97 km) from London and 17 miles (27 km) from Colchester. It was constructed in the 1930s as a holiday resort for Londoners, but over time has become one of the most deprived areas in the country.

Farringdon is a suburb of Sunderland, Tyne and Wear, England. Originally a manor estate for hundreds of years, Farringdon was rebuilt as a post-war council housing estate in the 1950s. It is approximately 3 miles south of the city centre along the A690, close to Thorney Close, Silksworth, East Herrington, Gilley Law and Doxford Park.

Temple Cloud is a village in the civil parish of Temple Cloud with Cameley, within the Chew Valley in Somerset in the Bath and North East Somerset Council area on the A37 road. It is located 10 miles from Bristol and Bath, very close to Clutton. The nearest town is Midsomer Norton [5 miles]. The village of Cameley is also very close.

Davenham is a rural village and civil parish approximately 3 kilometres (1.9 mi) south of the town of Northwich, part of the Borough of Cheshire West and Chester and the ceremonial county of Cheshire in England. It has a population of 5,655, reducing following reorganisation to 2,745 at the 2011 Census. The village is close to the A556 and A533 roads and both the River Dane and River Weaver. It is the birthplace of marathon world record holder, Paula Radcliffe.

Thorntree is a housing estate in east Middlesbrough within the unitary authority of Middlesbrough and the ceremonial county of North Yorkshire, England. The population of this Middlesbrough ward taken at the 2011 census was 6,290. It is so called because it was built on land which was Thorntree Farm. It has a public park called Thorntree Park. The main roads of the estate are College Road and The Greenway.

Southwick is a former village and now a suburb on the north banks of the River Wear in the city of Sunderland in the county of Tyne and Wear, historically in County Durham.

Bransholme is an area and a housing estate on the north side of Kingston upon Hull, England. The name Bransholme comes from an old Scandinavian word meaning Brand's water meadow.

Southbourne is a village and civil parish in the Chichester District of West Sussex, England. It lies to the east of the Hampshire County Border at Emsworth, the west of Chidham and south-east of Westbourne. Southbourne Parish comprises Lumley, Hermitage, Thornham, Prinsted and part of Nutbourne.

Freshbrook is a suburb in the west of Swindon, England, located close to junction 16 of the M4 motorway. Most houses in the area are found in cul-de-sacs, except for those on the few main roads Freshbrook has. The suburb is served by a "village centre" known colloquially as Freshbrook Shops.

Prebendal Farm is a housing estate in Aylesbury, Buckinghamshire, England. It is located to the south of the town, bordered by the Oxford Road, the railway and the Bearbrook.