Thought 'Ya Knew is the second solo studio album released by American singer CeCe Peniston, issued on January 10, 1994 by A&M Records. Peniston collaborated with her Chicago-based producer Steve Hurley, Carsten Schack and Kenneth Karlin (better recognized as duo Soulshock & Karlin) from Denmark, David Morales, Sir Jinx, and on one track ("Forever in My Heart") also with the multiple Grammy Award-nominee Brian McKnight. Decided not getting pigeonholed into the dance genre, the singer recorded for the set several ballads, trying to move into a R&B direction. Unlike its predecessor Finally , her second album was, therefore, a calculated mixture of pop ballads and R&B beats, though incorporating also other genres, such as jazz ("I'm in the Mood"), funk (I'm Not Over You"), reggae ("Through Those Doors") and gospel ("I Will Be Received").

The album received generally mixed reviews from music critics, and commercially, it proved to be a moderate success. Debuting on February 12, 1994 at number 102 on the Billboard 200, the album reached its peak a week later at number ninety-six, while spending nineteen weeks on the US chart in total. Overseas, the album entered the UK Albums Chart at number thirty-one, but charted for only two weeks there. Other territories included Switzerland (at number thirty-two), Japan (at number sixty-six), Netherlands (at number sixty-nine), and Germany (at number ninety-two).

Four official singles were released from the set, three of which entered the Billboard Hot 100, as well as the UK Singles Chart. All of them became successful on the dance chart, bringing Peniston two additional number one hits on the US Hot Dance Club Songs. In Japan, the album was shortly followed by Remix Collection , which featured alternate versions of songs issued on singles. The album was not accompanied by a worldwide tour.

Thought 'Ya Knew received mainly mixed reviews. In terms of artistic achievement, dancefloor potential or chart performance, the album did not match the success of Peniston's debut album, Finally . Jose F. Promis from Allmusic, however, blamed the record label A&M for marketing the artist to an R&B audience, which he called the "big mistake". Giving the album three (ouf of five stars), he highlighted especially "Hit by Love" anthem as the song closer in spirit to the singer's early dance hits, but he admitted that by that time of the single's release its "steam had worn off". [4] Both critics, Martin Johnson from Chicago Reader and Johnny Huston from Entertainment Weekly agreed that the album's low points occurred on its ballads and that Peniston faltered on slower numbers. (Johnson also added that even Toni Braxton, who redefined the urban contemporary ballad, "would have trouble breathing life into them"). [5] While Huston noticed Patti LaBelle-influenced vocal stylings (on "Through Those Doors"), [6] Johnson recalled young Chaka Khan and stressed the pungent lower registers of the singer's voice (on "Searchin'"). [5] People magazine found the album's problem in Peniston's big-time pop success and her new need to be seen more serious than just a dance-music artist. Calling ballads "the ballads from hell", the magazine reproached that all the slow stuff did was focus on Peniston's vocal limitations. [7] 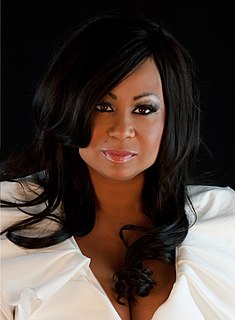 Cecilia Veronica "CeCe" Peniston is an American singer and former beauty queen. In the early 1990s, she scored five number one hits on the U.S. Billboard Hot Dance Music/Club Play. Her signature song "Finally" reached the number 5 spot on the Hot 100 and number 2 in UK Top 75. 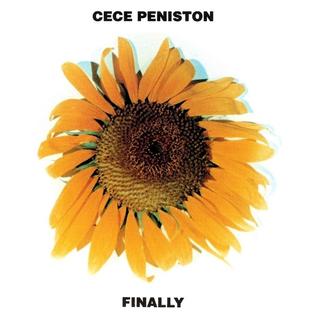 "Finally" is the 1991 debut single by American musician CeCe Peniston from her debut album, Finally. "Finally" became Peniston's first hit song, peaking at number five on the US Billboard Hot 100 in January 1992 and becoming her only US top-ten hit to date. Prior to that, the track was a major success on the US Dance charts, where it spent two weeks at number one in late 1991. In addition, a dance remix of the song peaked at number two on the UK Singles Chart in March 1992. The remix appeared on many dance music compilations in the early 90s. 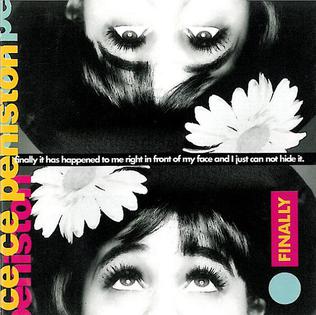 Finally is the debut album by American singer CeCe Peniston, released on January 28, 1992 by A&M Records. Prior to the release of this album, Peniston released her debut single "Finally", which topped the US Billboard Hot Dance Music Club Play chart on October 26, 1991, peaking eventually at number five on the Billboard Hot 100 and at number two in the UK Singles Chart. The album yielded two additional singles which achieved dance number one status in the US; "We Got a Love Thang", co-written by Chantay Savage, and "Keep On Walkin'", written in collaboration with Kym Sims. Both songs entered the UK Singles Chart top 10 and the Billboard Hot 100 top 20 in the US. Despite the success of the singles, the album itself climbed only to number seventy on the US Billboard 200. However, during its thirty-six weeks long presence in the chart it sold over 554,000 copies in the US. The album peaked at number ten on the UK Albums Chart. The total worldwide sales of the album surpassed 3,000,000 units. Two further tracks were released from the album which were more in the R&B field; "Inside That I Cried" charted at number ten in the US R&B chart and at number forty-two in the UK, while "Crazy Love" peaked at number thirty-one in the US and at number forty-four in the UK. The album was part of the resurgence of dance music in the United States during the mid-1990s.

American recording artist CeCe Peniston entered the music industry as a backup vocalist on the Overweight Pooch's album Female Preacher, released in July 1991 on A&M Records. Shortly before that though, she was featured on the B-side to 12-inch single "I Can't Take the Power" by a male rapper, Marvelous JC. Besides her vocal performance on the Pooch's only charting track, "I Like It", she was also given a credit for co-writing two compositions; "Kickin' Da Blues" and the titular "Female Preacher". Soon after, singer pursued her own solo career. By now, Peniston has released four studio albums including one as a member of The Sisters of Glory, two remix collections, one live album, four compilations and one live extended play (EP). Her singles discography features twenty-six physical releases, sixteen digital-only, eight promotional recordings and twenty-three other appearances; regardless of their format. She has also been included on one video album and has made fourteen music videos.

The Best Of is the first compilation album by American recording artist CeCe Peniston, released on March 2, 1998 by A&M Records in the overseas. It contains thirteen versions of her hit singles from 1991 to 1997. As the compilation was the singer's closing release under her contract with A&M, it didn't feature any new material. To increase the appeal of the product, the label included alternate, dancefloor remixed takes of Peniston's popular songs from her previous studio albums. Finally (1992), Thought 'Ya Knew (1994) and I'm Movin' On (1996).

I'm Movin' On is the third studio album recorded by American singer CeCe Peniston, released on September 9, 1996 by A&M Records. The set that supposed to be the artist's deeper foray into mainstream R&B followed the pattern of her previous release Thought 'Ya Knew (1994), in which Peniston began her unsuccessful transition into the R&B market. The label heavily focusing on hip-hop influenced R&B jams and a variety of slow ballads invited several producers to join her session, in front of with Dave Hall and Gordon Chambers, who co-wrote the title track. This time, Peniston reprised her fellow collaboration with Steve Hurley on two songs. "The Last to Know" that she co-wrote, and "Don't Know What to Do". None of these would be released on single, though. In order to push her musical horizons further, A&M also featured JoJo Hailey and Tenina Stevens, as the first time ever that another artists would be vocally credited on her record. 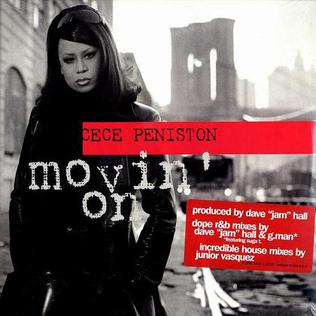 "Movin' On" is a 1996 song by the musician CeCe Peniston, released on July 23, 1996 as the lead single from her studio album I'm Movin' On. The track produced by Dave Hall charted at number twenty-nine in the US R&B chart, reaching in the Billboard Hot 100 at number eighty-three. A remixed version of the song hit at number ten in the category of the Hot Dance Maxi-Singles and entered also the Top 30 in the Japan.

"Keep Givin' Me Your Love" is a 1994 song by the musician CeCe Peniston, originally from her studio album Thought 'Ya Knew. While in the US, it was issued as the fifth single release in 1995, in the UK the song was released as the second single.

"Hit by Love" is a 1994 song by the musician CeCe Peniston, released as the fourth single from her album record Thought 'Ya Knew, and the fifth number one hit in the Billboard Hot Dance Music/Club Play for the artist. The song, issued in Europe with "I'm Not Over You" on B-side, climbed in the UK Top 75 chart to number thirty-three and number ninety in the Hot 100 chart.

"Searchin" is a 1993 song by the musician CeCe Peniston, taken from her second solo album Thought 'Ya Knew on A&M Records. 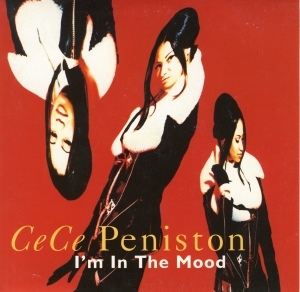 "I'm in the Mood" is a 1993 song by the musician CeCe Peniston, released as the first commercial single taken from Thought 'Ya Knew, the singer's second studio album. The composition scored singer her fourth number one on the Billboard Hot Dance Music/Club Play chart, and also entered the Top 10 of the US R&B chart, peaking at number 7. On the Hot 100 the song peaked at number 32 and made number 16 on the UK Top 75. In a 2011 interview for Boy Culture, TypePad's blogging service, Peniston disclosed that she had actually expected a better reception of the single. 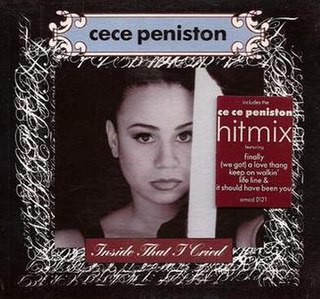 "Inside That I Cried" is a 1992 song by singer CeCe Peniston, taken from her album Finally on A&M Records. The single release included "Hitmix", a medley of her songs "Finally", "We Got a Love Thang", "Keep On Walkin'", "Lifeline" and "It Should Have Been You", all taken from her debut album. "Inside That I Cried" reached the Top 10 of the American R&B chart, and charted at number forty-two on the UK Top 75, and at number ninety-four on the US Hot 100. 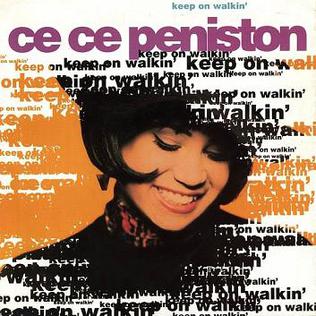 "Keep On Walkin'" is a 1992 song by the musician CeCe Peniston, recorded for her debut album release Finally on A&M Records. 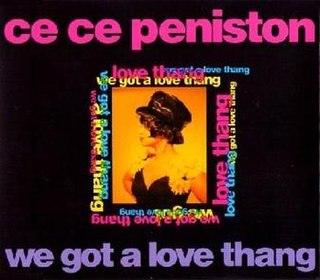 "We Got a Love Thang" is a 1992 song by American musician CeCe Peniston, originally released on her debut album, Finally. The song was co-written by Chantay Savage, and became the second number one hit for the artist, remaining on the top of the Billboard Hot Dance Music/Club Play chart two weeks. In the United Kingdom the title scored number six, while on the Hot 100 it reached number twenty.

"I Like It" is a 1991 song by Overweight Pooch featuring CeCe Peniston, who contributed vocals on the record. The single was written by E.L. Linnear and Felipe Delgado, and reached number sixteen in the US Billboard Hot Dance Music/Club Play chart, and number fifty-eight in the UK Singles Chart

Finally / We Got a Love Thang: Remix Collection is the first limited remix collection by CeCe Peniston, issued exclusively in Japan in 1992. The album was compiled of the singer's first two singles, as a result of charting both in the Japanese Top 10 at the same time. The album included overall eight versions remixed by David Morales, Steve Hurley, Maurice Joshua and E-Smoove.

"I'm Not Over You" is a 1994 song by the musician CeCe Peniston, originally recorded for her album Thought 'Ya Knew on A&M Records. The single achieved number two in the US Dance chart, and number ten on the R&B field. In the Billboard Hot 100 the song charted at number forty-one. The B-side of the single included "Searchin'", which was previously released only for promotional purposes.