A threat actor or malicious actor is a person or entity responsible for an event or incident that impacts, or has the potential to impact, the safety or security of another entity. Most often, the term is used to describe individuals and groups that perform malicious acts against organizations of various types and sizes. From a threat intelligence perspective, threat actors are often categorized as either unintentional or intentional and either external or internal. [1]

Internet security is a branch of computer security. It encompasses the Internet, browser security, web site security, and network security as it applies to other applications or operating systems as a whole. Its objective is to establish rules and measures to use against attacks over the Internet. The Internet is an inherently insecure channel for information exchange, with high risk of intrusion or fraud, such as phishing, online viruses, trojans, ransomware and worms.

Media democracy is a democratic approach to media studies that advocates for the reform of mass media to strengthen public service broadcasting and develop participation in alternative media and citizen journalism in order to create a mass media system that informs and empowers all members of society and enhances democratic values. Media is also defined as "medium" a way of communicating with others.

Crimeware is a class of malware designed specifically to automate cybercrime.

Physical information security is the intersection, the common ground between physical security and information security. It primarily concerns the protection of tangible information-related assets such as computer systems and storage media against physical, real-world threats such as unauthorized physical access, theft, fire and flood. It typically involves physical controls such as protective barriers and locks, uninterruptible power supplies, and shredders. Information security controls in the physical domain complement those in the logical domain, and procedural or administrative controls.

Internet safety or online safety or cyber safety or E-Safety is trying to be safe on the internet and is the act of maximizing a user's awareness of personal safety and security risks to private information and property associated with using the internet, and the self-protection from computer crime.

Indignation is a complex and discrete emotion that is triggered by social emotions and social environments. Feelings of anger and disgust are some emotions that make up indignation.

Information technology risk, IT risk, IT-related risk, or cyber risk is any risk related to information technology. While information has long been appreciated as a valuable and important asset, the rise of the knowledge economy and the Digital Revolution has led to organizations becoming increasingly dependent on information, information processing and especially IT. Various events or incidents that compromise IT in some way can therefore cause adverse impacts on the organization's business processes or mission, ranging from inconsequential to catastrophic in scale. 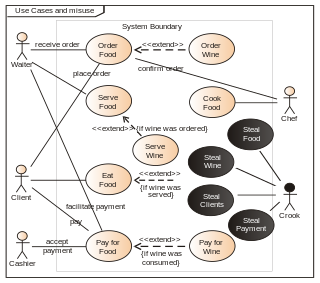 Misuse case is a business process modeling tool used in the software development industry. The term Misuse Case or mis-use case is derived from and is the inverse of use case. The term was first used in the 1990s by Guttorm Sindre of the Norwegian University of Science and Technology, and Andreas L. Opdahl of the University of Bergen, Norway. It describes the process of executing a malicious act against a system, while use case can be used to describe any action taken by the system.

A web threat is any threat that uses the World Wide Web to facilitate cybercrime. Web threats use multiple types of malware and fraud, all of which utilize HTTP or HTTPS protocols, but may also employ other protocols and components, such as links in email or IM, or malware attachments or on servers that access the Web. They benefit cybercriminals by stealing information for subsequent sale and help absorb infected PCs into botnets.

An advanced persistent threat (APT) is a stealthy threat actor, typically a nation state or state-sponsored group, which gains unauthorized access to a computer network and remains undetected for an extended period. In recent times, the term may also refer to non-state-sponsored groups conducting large-scale targeted intrusions for specific goals.

In Information security, Risk factor is a collective name for circumstances affecting the likelihood or impact of a security risk.

Mobile security, or more specifically mobile device security, is the protection of smartphones, tablets, and laptops from threats associated with wireless computing. It has become increasingly important in mobile computing. Of particular concern is the security of personal and business information now stored on smartphones.

An enemy or a foe is an individual or a group that is considered as forcefully adverse or threatening. The concept of an enemy has been observed to be "basic for both individuals and communities". The term "enemy" serves the social function of designating a particular entity as a threat, thereby invoking an intense emotional response to that entity. The state of being or having an enemy is enmity, foehood or foeship. 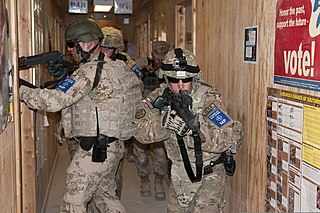 An insider threat is a malicious threat to an organization that comes from people within the organization, such as employees, former employees, contractors or business associates, who have inside information concerning the organization's security practices, data and computer systems. The threat may involve fraud, the theft of confidential or commercially valuable information, the theft of intellectual property, or the sabotage of computer systems. The insider threat comes in three categories:

In computers and computer networks, an attack is any attempt to expose, alter, disable, destroy, steal or gain information through unauthorized access to or make unauthorized use of an asset. A cyberattack is any offensive maneuver that targets computer information systems, infrastructures, computer networks, or personal computer devices. An attacker is a person or process that attempts to access data, functions, or other restricted areas of the system without authorization, potentially with malicious intent. Depending on the context, cyberattacks can be part of cyberwarfare or cyberterrorism. A cyberattack can be employed by sovereign states, individuals, groups, society, or organizations, and it may originate from an anonymous source. A product that facilitates a cyberattack is sometimes called a cyberweapon.

Ryuk is a type of ransomware known for targeting large, public-entity Microsoft Windows cybersystems. It typically encrypts data on an infected system, rendering the data inaccessible until a ransom is paid in untraceable bitcoin. Ryuk is believed to be used by two or more criminal groups, most likely Russian, who target organizations rather than individual consumers.