Freycinet National Park is a national park on the east coast of Tasmania, Australia, 125 km northeast of Hobart. It occupies a large part of the Freycinet Peninsula, named after French navigator Louis de Freycinet, and Schouten Island. Founded in 1916, it is Tasmania's oldest park, along with Mount Field National Park. Bordering the national park is the small settlement of Coles Bay, and the largest nearby town is Swansea. Freycinet contains part of the rugged Tasmanian coastline and includes the secluded Wineglass Bay. Features of the park include its red and pink granite formations and a series of jagged granite peaks in a line, called "The Hazards".

Mole Creek Karst is a national park situated in the North of Tasmania, Australia, 168 km northwest of Hobart.It is located on the slopes of the Great Western Tiers to the east of the town of Mole Creek. It is the only national park in Tasmania created specifically to protect karst landforms. It is part of the Tasmanian Wilderness World Heritage Site. 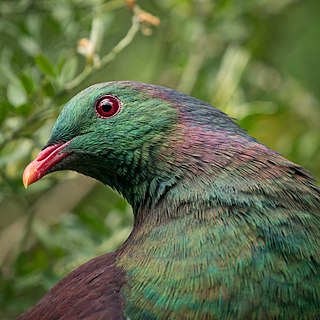 Conservation in New Zealand has a history associated with both Māori and Europeans. Both groups of people caused a loss of species and both altered their behaviour to a degree after realising their effect on indigenous flora and fauna.

The Flora and Fauna Guarantee Act 1988, also known as the FFG Act, is an act of the Victorian Government designed to protect species, genetic material and habitats, to prevent extinction and allow maximum genetic diversity within the Australian state of Victorian for perpetuity. It was the first Australian legislation to deal with such issues. It enables the listing of threatened species and communities and threats to native species, and the declaration of critical habitat necessary for the survival of native plants and animals.

A conservation-dependent species is a species which has been categorised as "Conservation Dependent" ("LR/cd") by the International Union for Conservation of Nature (IUCN), i.e. as dependent on conservation efforts to prevent it from becoming threatened with extinction. Such species must be the focus of a continuing species-specific and/or habitat-specific conservation programme, the cessation of which would result in the species qualifying for one of the threatened categories within a period of five years.

The Dryandra Woodland is a nature conservation area in Western Australia within the Shires of Cuballing, Williams and Wandering, about 164 kilometres south-east of Perth and 22 kilometres north-west of the town of Narrogin. It is a complex of 17 distinct blocks managed by the Western Australian Department of Parks and Wildlife and spread over approximately 50 kilometres separated by areas of agricultural land. The area is considered to be one of the state's major conservation areas, and although it is far from pristine due to its history of logging operations, a number of species of threatened fauna are rebuilding populations through the removal of introduced predators such as foxes and feral cats. 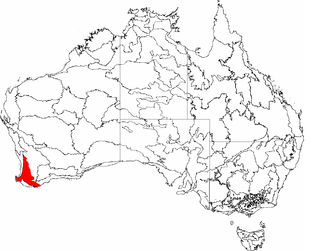 Jarrah Forest is an interim Australian bioregion located in Western Australia. The Jarrah Forest comprises reserves across the south-west corner of WA and is managed for uses including recreation. There are many small areas of parkland while larger protected areas include the Dryandra Woodland, Lane-Poole Reserve, and the Perup Forest Ecology Centre. Also managed for land uses such as water, timber and mineral production, recreation and conservation, the forest is recognised globally as a significant hotspot of plant biodiversity and endemism.

The Regional Forest Agreements (RFA) are 20 year plans for the conservation and sustainable management of Australia's native forests, and are intended to provide certainty to commercial forestry operations while protecting environmental values. The 10 RFA's were progressively signed between 1997 and 2001. The RFA process grew out of the 1992 National Forest Policy Statement. 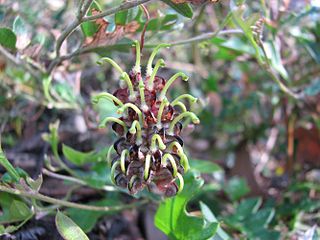 Grevillea floripendula, also known as Ben Major grevillea, is a prostrate or spreading shrub which is endemic to a small area in central western Victoria in Australia. It grows up to 1 metre in height and 3 metres in width. The inflorescence is suspended on a long, thin peduncle. The individual flowers are green-grey to purplish-brown and appear between October and December in the species' native range. 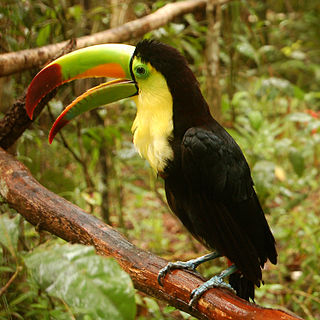 After declaring independence in 1981, Belize enacted the Wildlife Protection Act, which is the main source of wildlife law in Belize. Wildlife in Belize is defined as any undomesticated mammal, reptile or bird, amphibian and any egg, nest or part or product thereof. Although Belize is only two hundred miles (320 km) long and a little more than sixty miles (97 km) wide, it hosts a remarkable abundance of flora and fauna. It is the home of more than 150 species of mammals, 549 birds, 150 amphibians and reptiles, nearly 600 species of freshwater and marine fish and 3,408 species of vascular plants.

The Nature Conservation Act 1992 is an act of the Parliament of Queensland, Australia, that provides for the legislative protection of Queensland's threatened biota. 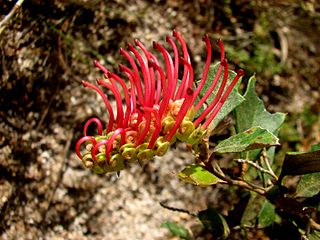 Grevillea infecunda, commonly known as Anglesea grevillea, is a root-suckering shrub which is endemic to Victoria, Australia. It grows to 0.3 to 1.2 metres in height. The flowers are yellowish-green, ageing to orange-red. These appear between October and December in its native range. 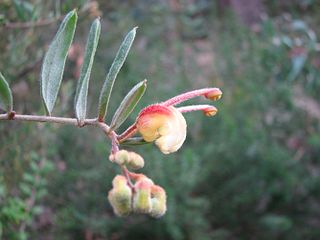 Grevillea celata, the Nowa Nowa grevillea or Colquhoun grevillea, is a shrub which is endemic to Victoria, Australia. It is closely related to Grevillea alpina and Grevillea chrysophaea.

Grevillea bedggoodiana, commonly known as the Enfield grevillea, is a shrub that is endemic to Victoria, Australia. It is closely related to Grevillea obtecta and Grevillea aquifolium.