Last updated January 10, 2022
Inventory of plant species in a given region
For other uses, see Flora (disambiguation).

Flora is all the plant life present in a particular region or time, generally the naturally occurring (indigenous) native plants. Sometimes bacteria and fungi are also referred to as flora, as in the terms gut flora or skin flora . [1] [2] [3]

The word "flora" comes from the Latin name of Flora, the goddess of plants, flowers, and fertility in Roman mythology. [4] The technical term "flora" is then derived from a metonymy of this goddess at the end of the sixteenth century. It was first used in poetry to denote the natural vegetation of an area, but soon also assumed the meaning of a work cataloguing such vegetation. Moreover, "Flora" was used to refer to the flowers of an artificial garden in the seventeenth century. [5]

The distinction between vegetation (the general appearance of a community) and flora (the taxonomic composition of a community) was first made by Jules Thurmann (1849). Prior to this, the two terms were used indiscriminately. [6] [7]

Plants are grouped into floras based on region (floristic regions), period, special environment, or climate. Regions can be distinct habitats like mountain vs. flatland. Floras can mean plant life of a historic era as in fossil flora. Lastly, floras may be subdivided by special environments:

The flora of a particular area or time period can be documented in a publication also known as a "flora" (often capitalized as "Flora" to distinguish the two meanings when they might be confused). Floras may require specialist botanical knowledge to use with any effectiveness. Traditionally they are books, but some are now published on CD-ROM or websites.

Simon Paulli's Flora Danica of 1648 is probably the first book titled "Flora" to refer to the plant world of a certain region. It mainly describes medicinal plants growing in Denmark. The Flora Sinensis by the Polish Jesuit Michał Boym is another early example of a book titled "Flora". [8] However, despite its title it covered not only plants, but also some animals of the region, that is China and India. [9]

A published flora often contains diagnostic keys. Often these are dichotomous keys, which require the user to repeatedly examine a plant, and decide which one of two alternatives given best applies to the plant. 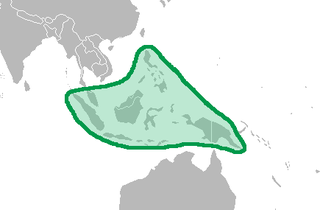 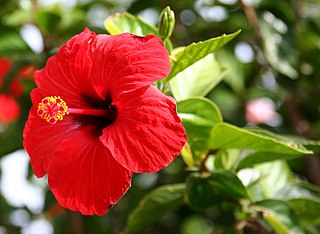 Hibiscus rosa-sinensis, known colloquially as Chinese hibiscus, China rose, Hawaiian hibiscus, rose mallow and shoeblack plant, is a species of tropical hibiscus, a flowering plant in the Hibisceae tribe of the family Malvaceae. It is widely cultivated in tropical and subtropical regions, but is not known in the wild, so that its native distribution is uncertain. An origin in some part of tropical Asia is likely. It is widely grown as an ornamental plant in the tropics and subtropics. 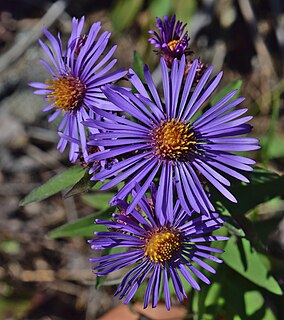 Symphyotrichum novae-angliae is a species of flowering plant in the aster family (Asteraceae) native to central and eastern North America. Commonly known as New England aster, hairy Michaelmas-daisy, or Michaelmas daisy, it is a perennial, herbaceous plant usually between 30 and 120 centimeters tall and 60 to 90 cm wide. 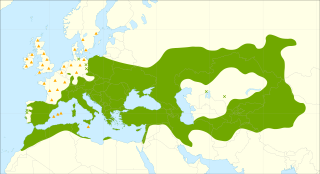 Populus alba, commonly called silver poplar, silverleaf poplar, or white poplar, is a species of poplar, most closely related to the aspens. It is native to Morocco and then Portugal through central Europe to central Asia. It grows in moist sites, often by watersides, in regions with hot summers and cold to mild winters.

Onoclea sensibilis, the sensitive fern, also known as the bead fern, is a coarse-textured, medium to large-sized deciduous perennial fern. The name comes from its sensitivity to frost, the fronds dying quickly when first touched by it. It is sometimes treated as the only species in Onoclea, but some authors do not consider the genus monotypic. 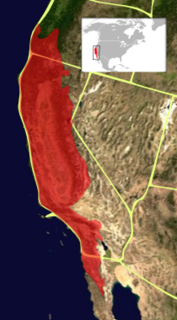 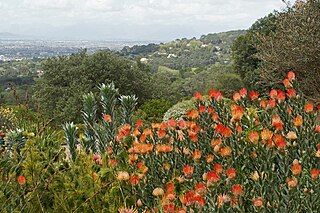 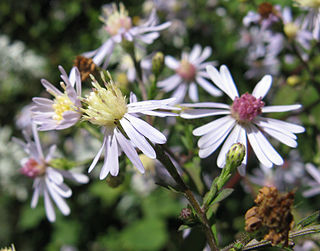 Symphyotrichum cordifolium, commonly known as common blue wood aster, heartleaf aster, and blue wood-aster, is a perennial herbaceous flowering plant in the family Asteraceae native to central and eastern North America. It reaches heights of up to 1.2 meters and has bluish daisy-like flowers which bloom late-summer and fall in its range.

The native flora of the United States includes about 17,000 species of vascular plants, plus tens of thousands of additional species of other plants and plant-like organisms such as algae, lichens and other fungi, and mosses. About 3,800 additional non-native species of vascular plants are recorded as established outside of cultivation in the U.S., as well as a much smaller number of non-native non-vascular plants and plant relatives. The United States possesses one of the most diverse temperate floras in the world, comparable only to that of China. 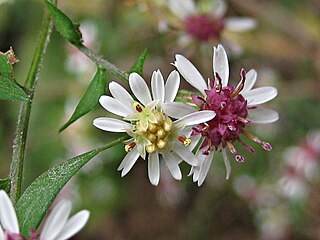 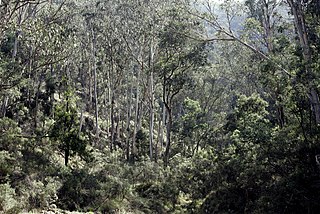 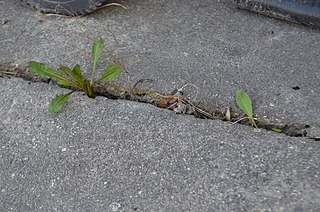 A weed is a plant considered undesirable in a particular situation, "a plant in the wrong place". Examples commonly are plants unwanted in human-controlled settings, such as farm fields, gardens, lawns, and parks. Taxonomically, the term "weed" has no botanical significance, because a plant that is a weed in one context is not a weed when growing in a situation where it is wanted, and where one species of plant is a valuable crop plant, another species in the same genus might be a serious weed, such as a wild bramble growing among cultivated loganberries. In the same way, volunteer crops (plants) are regarded as weeds in a subsequent crop. Many plants that people widely regard as weeds also are intentionally grown in gardens and other cultivated settings, in which case they are sometimes called beneficial weeds. The term weed is also applied to any plant that grows or reproduces aggressively, or is invasive outside its native habitat. More broadly, "weed" is occasionally applied pejoratively to species outside the plant kingdom, species that can survive in diverse environments and reproduce quickly; in this sense it has even been applied to humans. 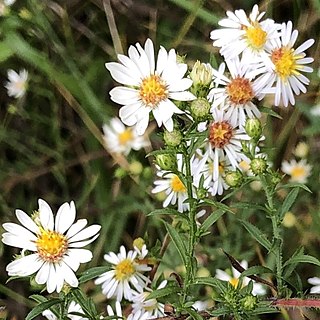 Symphyotrichum pilosum, commonly called hairy white oldfield aster or frost aster, is a flowering plant in the family Asteraceae native to central and eastern North America. It is a perennial, herbaceous plant that may reach 20 to 120 centimeters tall. Its flowers have white ray florets and yellow disk florets. 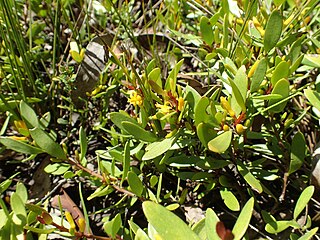 Persoonia procumbens is a plant in the family Proteaceae and is endemic to part of the New England Tableland. It is a prostrate shrub with rather fleshy, relatively large leaves and small groups of cylindrical yellow flowers. It is similar to P. daphnoides but has darker hairs on the young branches and smaller, less hairy flowers. 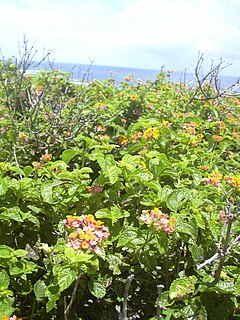 Escaped plants are cultivated plants, usually garden plants, that are not originally native to an area, and due to their dispersal strategies, have escaped from cultivation and have settled in the wild and bred there, whether intentionally or unintentionally. Escaped plants are purposefully introduced plants that have naturalized in the wild and can develop into invasive plants, the settlement of which is to be assessed as problematic. Other commonly used terms include escaped garden plant, garden escapee, escaped ornamental or garden refugee.