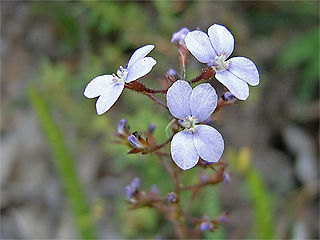 The family Stylidiaceae is a taxon of dicotyledonous flowering plants. It consists of five genera with over 240 species, most of which are endemic to Australia and New Zealand. Members of Stylidiaceae are typically grass-like herbs or small shrubs and can be perennials or annuals. Most species are free standing or self-supporting, though a few can be climbing or scrambling.

It is derived from the fusion of both male and female parts (stamens and pistil) into a single organ. This means that the style and stigma of the pistil, with the filaments and one or more anthers, are all united. 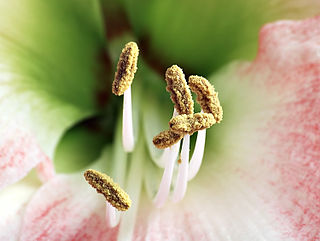 The stigma sits at the apex of the column in the front but is pointing downwards after resupination (the rotation by 180 degrees before unfolding of the flower).

Resupination is derived from the Latin word resupinus, meaning "bent back with the face upward" or "on the back". "Resupination" is the noun form of the adjective "resupine" which means "being upside-down, supine or facing upward".

This stigma has the form of a small bowl, the clinandrium, a viscous surface embedding the (generally) single anther. On top of it all is the anther cap. Sometimes there is a small extension or little beak to the median stigma lobe, called rostellum .

The rostellum is a projecting part of the column in Orchidaceae flowers, and separates the male androecium from the female gynoecium, commonly preventing self-fertilisation. In many orchids, such as Orchis mascula, the pollinia or pollen masses, are connected by stipes down to adhesive discs attached to the rostellum which forms cups keeping the discs or balls sticky.

Column wings may project laterally from the stigma. The column foot is formed by the attachment of the lip to the basal protruding part of the column. One speaks of a mentum (chin) if the lateral sepals are also basally adnate (= attached to the foot of the column).

In botany, the labellum is the part of the flower of an orchid or Canna, or other less-known genera that serves to attract insects, which pollinate the flower, and acts as a landing platform for them.

A sepal is a part of the flower of angiosperms. Usually green, sepals typically function as protection for the flower in bud, and often as support for the petals when in bloom. The term sepalum was coined by Noël Martin Joseph de Necker in 1790, and derived from the Greek σκεπη (skepi), a covering.

The column both releases pollen and also receives it (from another individual) for fertilization. In the Orchidaceae family, unlike almost all other flowering plants, the single male anther at the tip of the column produces pollen that is not free and powdery but held in waxy masses of two, four or six pellets called pollinia . The transfer of pollinia from one flower to another, though highly efficient, is often reliant upon one particular species of arthropods and it can be catastrophic for the population if its pollinator disappears from the community.

Pollen is a fine to coarse powdery substance comprising pollen grains which are male microgametophytes of seed plants, which produce male gametes. Pollen grains have a hard coat made of sporopollenin that protects the gametophytes during the process of their movement from the stamens to the pistil of flowering plants, or from the male cone to the female cone of coniferous plants. If pollen lands on a compatible pistil or female cone, it germinates, producing a pollen tube that transfers the sperm to the ovule containing the female gametophyte. Individual pollen grains are small enough to require magnification to see detail. The study of pollen is called palynology and is highly useful in paleoecology, paleontology, archaeology, and forensics. 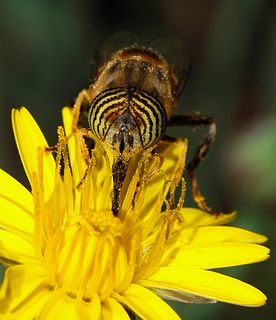 Pollination is the transfer of pollen from a male part of a plant to a female part of a plant, later enabling fertilisation and the production of seeds, most often by an animal or by wind. Pollinating agents are animals such as insects, birds, and bats; water; wind; and even plants themselves, when self-pollination occurs within a closed flower. Pollination often occurs within a species. When pollination occurs between species it can produce hybrid offspring in nature and in plant breeding work.

A pollen tube is a tubular structure produced by the male gametophyte of seed plants when it germinates. It acts as a conduit to transport the male gamete cells from the pollen grain—either from the stigma to the ovules at the base of the pistil or directly through ovule tissue in some gymnosperms. In maize, this single cell can grow longer than 12 inches (30 cm) to traverse the length of the pistil.

Self-pollination is when pollen from the same plant arrives at the stigma of a flower or at the ovule. There are two types of self-pollination: in autogamy, pollen is transferred to the stigma of the same flower; in geitonogamy, pollen is transferred from the anther of one flower to the stigma of another flower on the same flowering plant, or from microsporangium to ovule within a single (monoecious) gymnosperm. Some plants have mechanisms that ensure autogamy, such as flowers that do not open (cleistogamy), or stamens that move to come into contact with the stigma. The term selfing that is often used as a synonym, is not limited to self-pollination, but also applies to other types of self-fertilization. 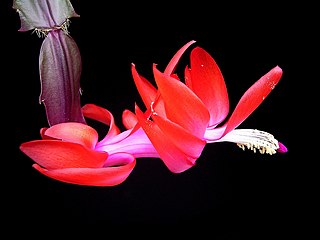 In plant systematics Epidendroideae is a subfamily of the orchid family, Orchidaceae. Epidendroideae is larger than all the other orchid subfamilies together, comprising more than 15,000 species in 576 genera. Most Epidendroid orchids are tropical epiphytes, typically with pseudobulbs. There are, however, some terrestrials such as Epipactis and even a few myco-heterotrophs, which are parasitic upon mycorrhizal fungi.

A flower, sometimes known as a bloom or blossom, is the reproductive structure found in flowering plants. The biological function of a flower is to effect reproduction, usually by providing a mechanism for the union of sperm with eggs. Flowers may facilitate outcrossing or allow selfing. Some flowers produce diaspores without fertilization (parthenocarpy). Flowers contain sporangia and are the site where gametophytes develop. Many flowers have evolved to be attractive to animals, so as to cause them to be vectors for the transfer of pollen. After fertilization, the ovary of the flower develops into fruit containing seeds.

Pterostylis cardiostigma is a species of orchid endemic to New Zealand. It has erect leaves, the upper leaves higher than the flower which is stiff, upright and green with narrow white stripes and pinkish tips. It barely opens fully and is sometimes mistaken for an unopened flower of Pterostylis banksii with which it often grows.

The monocots are one of the two major clades of flowering plants, the other being the dicots. In order to reproduce they utilize various strategies such as employing forms of asexual reproduction, restricting which individuals they are sexually compatible with, or influencing how they are pollinated. Nearly all reproductive strategies that evolved in the dicots have independently evolved in monocots as well. Despite these similarities and their close relatedness, monocots and dicots have distinct traits in their reproductive biologies.