Last updated March 28, 2022
Short plant stem with fleshy leaves or leaf bases for food storage and water.
This article is about bulbs as defined botanically. For bulbs in the wider gardening sense, see Ornamental bulbous plant. For other uses, see Bulb (disambiguation).

In botany, a bulb is structurally a short stem with fleshy leaves or leaf bases [1] that function as food storage organs during dormancy. (In gardening, plants with other kinds of storage organ are also called "ornamental bulbous plants" or just "bulbs".)

The bulb's leaf bases, also known as scales, generally do not support leaves, but contain food reserves to enable the plant to survive adverse conditions. At the center of the bulb is a vegetative growing point or an unexpanded flowering shoot. The base is formed by a reduced stem, and plant growth occurs from this basal plate. Roots emerge from the underside of the base, and new stems and leaves from the upper side. Tunicate bulbs have dry, membranous outer scales that protect the continuous lamina of fleshy scales. [2] Species in the genera Allium , Hippeastrum , Narcissus , and Tulipa all have tunicate bulbs. Non-tunicate bulbs, such as Lilium and Fritillaria species, lack the protective tunic and have looser scales. [3]

Bulbous plant species cycle through vegetative and reproductive growth stages; the bulb grows to flowering size during the vegetative stage and the plant flowers during the reproductive stage. Certain environmental conditions are needed to trigger the transition from one stage to the next, such as the shift from a cold winter to spring. [2] Once the flowering period is over, the plant enters a foliage period of about six weeks during which time the plant absorbs nutrients from the soil and energy from the sun for setting flowers for the next year. Bulbs dug up before the foliage period is completed will not bloom the following year but then should flower normally in subsequent years.

Nearly all plants that form true bulbs are monocotyledons, and include:

Oxalis , in the family Oxalidaceae, is the only dicotyledon genus that produces true bulbs. [4] [5]

A bulbil is a small bulb, and may also be called a bulblet, bulbet, or bulbel. [6]

Small bulbs can develop or propagate a large bulb. If one or several moderate-sized bulbs form to replace the original bulb, they are called renewal bulbs. [6] Increase bulbs are small bulbs that develop either on each of the leaves inside a bulb, or else on the end of small underground stems connected to the original bulb. [6]

Some lilies, such as the tiger lily Lilium lancifolium , form small bulbs, called bulbils, in their leaf axils. Several members of the onion family, Alliaceae, including Allium sativum (garlic), form bulbils in their flower heads, sometimes as the flowers fade, or even instead of the flowers (which is a form of apomixis). The so-called tree onion (Allium × proliferum) forms small onions which are large enough for pickling.

Some ferns, such as the hen-and-chicken fern, produce new plants at the tips of the fronds' pinnae that are sometimes referred to as bulbils.

Amaryllis is the only genus in the subtribe Amaryllidinae. It is a small genus of flowering bulbs, with two species. The better known of the two, Amaryllis belladonna, is a native of the Western Cape region of South Africa, particularly the rocky southwest area between the Olifants River Valley and Knysna. For many years there was confusion among botanists over the generic names Amaryllis and Hippeastrum, one result of which is that the common name "amaryllis" is mainly used for cultivars of the genus Hippeastrum, widely sold in the winter months for their ability to bloom indoors. Plants of the genus Amaryllis are known as belladonna lily, Jersey lily, naked lady, amarillo, Easter lily in Southern Australia or, in South Africa, March lily due to its propensity to flower around March. This is one of numerous genera with the common name "lily" due to their flower shape and growth habit. However, they are only distantly related to the true lily, Lilium. In the Victorian Language of Flowers, amaryllis means "pride, determination and radiant beauty".

Lilium lancifolium is an Asian species of lily, native to China, Japan, Korea, and the Russian Far East. It is widely planted as an ornamental because of its showy orange-and-black flowers, and sporadically occurs as a garden escapee in North America, particularly the eastern United States including New England, and has made incursions into some southern states such as Georgia. 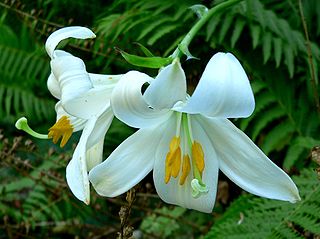 Lilium is a genus of herbaceous flowering plants growing from bulbs, all with large prominent flowers. They are the true lilies. Lilies are a group of flowering plants which are important in culture and literature in much of the world. Most species are native to the northern hemisphere and their range is temperate climates and extends into the subtropics. Many other plants have "lily" in their common names, but do not belong to the same genus and are therefore not true lilies.

Hippeastrum is a genus of about 90 species and over 600 hybrids and cultivars of perennial herbaceous bulbous plants. They generally have large fleshy bulbs and tall broad leaves, generally evergreen, and large red or purple flowers. 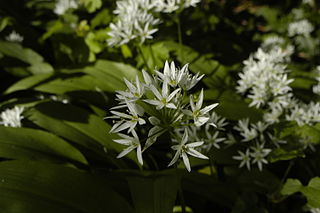 Allium ursinum, known as wild garlic, ramsons,wild cowleek, cowlic, buckrams, broad-leaved garlic, wood garlic, bear leek or bear's garlic, is a bulbous perennial flowering plant in the amaryllis family Amaryllidaceae. It is native to Europe and Asia, where it grows in moist woodland. It is a wild relative of onion and garlic, all belonging to the same genus, Allium. There are two recognized subspecies: A. ursinum subsp. ursinum and A. ursinum subsp. ucranicum.

Elephant garlic is a perennial plant belonging to the onion genus. It has a tall, solid, flowering stalk and broad, flat leaves. The flavor is milder than garlic and can be eaten raw in salads, roasted, or sauteed, but is generally not a substitute for conventional garlic in cooking. It is sometimes confused with solo garlic.

The tree onion is a perennial plant similar to the common onion (A. cepa), but with a cluster of bulblets where a normal onion would have flowers. Tree onions are also known as topsetting onions, walking onions, or Egyptian onions. Genomic evidence has conclusively shown that they are a diploid hybrid of the shallot and the Welsh onion (A. fistulosum). However, some sources may still treat the tree onion as A. cepa var. proliferum or A. cepa Proliferum Group.

Allium vineale is a perennial, bulb-forming species of wild onion, native to Europe, northwestern Africa and the Middle East. The species was introduced in Australia and North America, where it has become a noxious weed.

A storage organ is a part of a plant specifically modified for storage of energy (generally in the form of carbohydrates) or water. Storage organs often grow underground, where they are better protected from attack by herbivores. Plants that have an underground storage organ are called geophytes in the Raunkiær plant life-form classification system. Storage organs often, but not always, act as perennating organs which enable plants to survive adverse conditions. 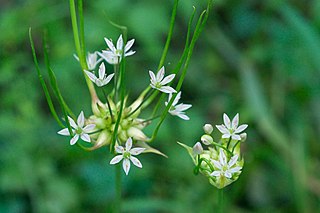 Allium canadense, the Canada onion, Canadian garlic, wild garlic, meadow garlic and wild onion is a perennial plant native to eastern North America from Texas to Florida to New Brunswick to Montana. The species is also cultivated in other regions as an ornamental and as a garden culinary herb. The plant is also reportedly naturalized in Cuba.

The sand leek, also known as rocambole and Korean pickled-peel garlic, is a Eurasian species of wild onion with a native range extending across much of Europe, Middle East, and Korea. The species should not be confused with rocambole garlic, which is A. sativum var. ophioscorodon. 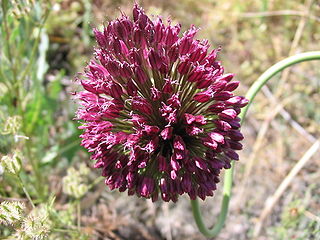 Allium sphaerocephalon is a plant species in the Amaryllis family known as round-headed leek, round-headed garlic, ball-head onion, and other variations on these names. Drumstick allium is another common name applied to this species. Some publications use the alternate spelling Allium sphaerocephalum. It is a bulbous herbaceous perennial plant.

A bulbil is a small, young plant that is reproduced vegetatively from axillary buds on the parent plant's stem or in place of a flower on an inflorescence. These young plants are clones of the parent plant that produced them—they have identical genetic material. The formation of bulbils is a form of asexual reproduction, as they can eventually go on to form new stand-alone plants.

Ornamental bulbous plants, often called ornamental bulbs or just bulbs in gardening and horticulture, are herbaceous perennials grown for ornamental purposes, which have underground or near ground storage organs. Botanists distinguish between true bulbs, corms, rhizomes, tubers and tuberous roots, any of which may be termed "bulbs" in horticulture. Bulb species usually lose their upper parts during adverse conditions such as summer drought and heat or winter cold. The bulb's storage organs contain moisture and nutrients that are used to survive these adverse conditions in a dormant state. When conditions become favourable the reserves sustain a new growth cycle. In addition, bulbs permit vegetative or asexual multiplication in these species. Ornamental bulbs are used in parks and gardens and as cut flowers.

Oxalis glabra is a member of the wood-sorrel family, Oxalidaceae. It is only one of the 800 total species belonging to this family. The plant is commonly known as finger-leaf due to its trifoliate leaf structure. This trifoliate structure can be seen in variations throughout all members of the genus Oxalis. However, the particularly narrow leaflets of the glabra plant look more like fingers rather than a common clover. The plant is native to South Africa and can be found carpeting the ground of woodlands and bushlands.

Allium paradoxum, the few-flowered garlic or few-flowered leek, is an Asian species of wild onion in the Amaryllis family. It is native to mountainous regions of Iran, Caucasus, and Turkmenistan and invasive in Europe.

Hippeastrum petiolatum is a flowering perennial herbaceous bulbous plant, in the family Amaryllidaceae, distributed from Paraguay to Uruguay and Argentina. 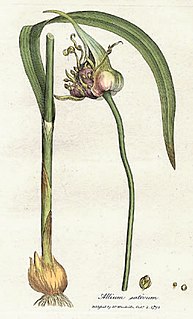 Allium is a genus of monocotyledonous flowering plants that includes hundreds of species, including the cultivated onion, garlic, scallion, shallot, leek, and chives. The generic name Allium is the Latin word for garlic, and the type species for the genus is Allium sativum which means "cultivated garlic".