The sayings collection may be identified with Q, or with a subset of Q [1] if some (typically narrative-related) material normally assigned to Q is instead attributed to Matthew's creativity in conjunction with Luke's use of Matthew.

Alternatively, M.A.T. Linssen [8] proposes it as a variant by equating the sayings collection to The Gospel of Thomas, suggesting that Matthew and Luke worked together to write different gospels, each targeted at their own audience 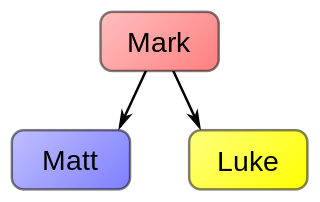 Marcan priority is the hypothesis that the Gospel of Mark was the first of the three synoptic gospels to be written, and was used as a source by the other two. It is a central element in discussion of the synoptic problem; the question of the documentary relationship among these three gospels. 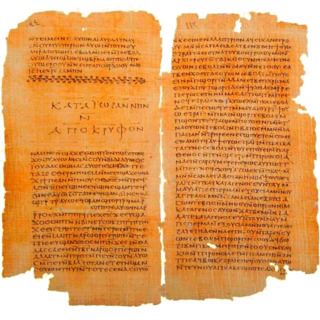 The Gospel of Thomas is an extra-canonical sayings gospel. It was discovered near Nag Hammadi, Egypt, in December 1945 among a group of books known as the Nag Hammadi library. Scholars speculate that the works were buried in response to a letter from Bishop Athanasius declaring a strict canon of Christian scripture. Scholars have proposed dates of composition as early as AD 60 and as late as AD 250. Since its discovery, many scholars have seen it as evidence in support of the existence of a "Q source," which might have been very similar in its form as a collection of sayings of Jesus without any accounts of his deeds or his life and death, referred to as a sayings gospel.

The two-source hypothesis is an explanation for the synoptic problem, the pattern of similarities and differences between the three Gospels of Matthew, Mark, and Luke. It posits that the Gospel of Matthew and the Gospel of Luke were based on the Gospel of Mark and a hypothetical sayings collection from the Christian oral tradition called Q.

Heinrich Julius Holtzmann, German Protestant theologian, son of theologian Karl Julius Holtzmann (1804–1877), was born at Karlsruhe, where his father ultimately became prelate and counsellor to the supreme consistory of the Evangelical State Church in Baden.

The term logia, plural of logion, is used variously in ancient writings and modern scholarship in reference to communications of divine origin. In pagan contexts, the principal meaning was "oracles", while Jewish and Christian writings used logia in reference especially to "the divinely inspired Scriptures". A famous and much-debated occurrence of the term is in the account by Papias of Hierapolis on the origins of the canonical Gospels. Since the 19th century, New Testament scholarship has tended to reserve the term logion for a divine saying, especially one spoken by Jesus, in contrast to narrative, and to call a collection of such sayings, as exemplified by the Gospel of Thomas, logia.

M source, which is sometimes referred to as M document, or simply M, comes from the M in "Matthean material". It is a hypothetical textual source for the Gospel of Matthew. M Source is defined as that 'special material' of the Gospel of Matthew that is neither Q source nor Mark. 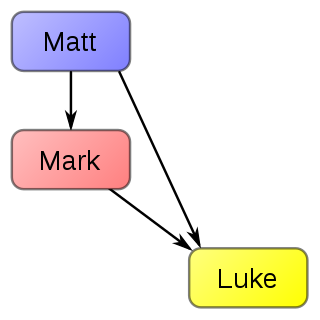 The Augustinian hypothesis is a solution to the synoptic problem, which concerns the origin of the Gospels of the New Testament. The hypothesis holds that Matthew was written first, by Matthew the Evangelist. Mark the Evangelist wrote the Gospel of Mark second and used Matthew and the preaching of Peter as sources. Luke the Evangelist wrote the Gospel of Luke and was aware of the two Gospels that preceded him. Unlike some competing hypotheses, this hypothesis does not rely on, nor does it argue for, the existence of any document that is not explicitly mentioned in historical testimony. Instead, the hypothesis draws primarily upon historical testimony, rather than textual criticism, as the central line of evidence. The foundation of evidence for the hypothesis is the writings of the Church Fathers: historical sources dating back to as early as the first half of the 2nd century, which have been held as authoritative by most Christians for nearly two millennia. Adherents to the Augustinian hypothesis view it as a simple, coherent solution to the synoptic problem.

The criterion of multiple attestation, also called the criterion of independent attestation or the cross-section method, is a tool used by Biblical scholars to help determine whether certain actions or sayings by Jesus in the New Testament are from the Historical Jesus. Simply put, the more independent witnesses that report an event or saying, the better. This criterion was first developed by F. C. Burkitt in 1906, at the end of the first quest for the historical Jesus.

The Common Sayings Source is one of many theories that attempts to provide insight into the Synoptic Problem. The theory posits that the Gospel of Thomas, a sayings gospel, and the Q source, a hypothetical sayings gospel, have a common source. Elements of this Common Sayings Source can be found in the text of the Gospel of Thomas and what scholars are proposing existed in the Q source. The high level of similarities between the two sources suggests that both documents are later redactions of a single source, the original Common Sayings Source, which was then redacted by different groups to suit their own needs.

The Q source is a hypothetical written collection of primarily Jesus' sayings. Q is part of the common material found in the Gospels of Matthew and Luke but not in the Gospel of Mark. According to this hypothesis, this material was drawn from the early Church's oral gospel traditions. 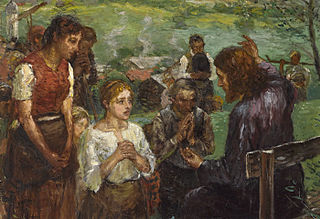 Oral gospel traditions is the hypothetical first stage in the formation of the written gospels as information was passed by word of mouth. These oral traditions included different types of stories about Jesus. For example, people told anecdotes about Jesus healing the sick and debating with his opponents. The traditions also included sayings attributed to Jesus, such as parables and teachings on various subjects which, along with other sayings, formed the oral gospel tradition. The supposition of such traditions have been the focus of scholars such as Bart Ehrman, James Dunn, and Richard Bauckham, although each scholars vary widely on their conclusions, with Ehrman and Bauckham publicly debating on the subject. 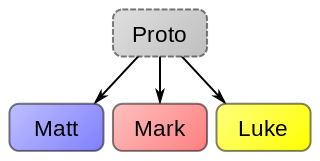 The Hebrew Gospel hypothesis is that a lost gospel, written in Hebrew or Aramaic, predated the four canonical gospels. Some have suggested a complete unknown proto-gospel as the source of the canonical gospels. But the hypothesis is usally based upon the testimony of early church historians, deriving from the 2nd-century bishop Papias of Hierapolis, that Matthew the Apostle was the first to compos a gospel and that he did it in Hebrew. Papias appeared to say that this Hebrew or Aramaic gospel was subsequently translated into the canonical Gospel of Matthew. Modern variants of the hypothesis survive, but have not found favor with scholars as a whole.

Advanced by Dennis R. MacDonald, the Q+/Papias hypothesis (Q+/PapH) offers an alternative solution to the synoptic problem. MacDonald prefers to call this expanded version of Q Logoi of Jesus, which is supposed to have been its original title.