Threlkeldia diffusa, also known as Coast Bonefruit, is a perennial herb which occurs in coastal areas and saline flats in Australia. It is sometimes prostrate or may grow up to 0.4 metres in height. The green flowers occur between October and November (spring) in its native range.

Hibbertia, or Guinea flower, is a genus of trees, shrubs, trailing shrubs and climbers of the family Dilleniaceae. The five-petalled flowers of all species are varying shades of yellow, with the exception of H. stellaris, H. miniata and H. selkii, a recently named (1980s) species from the Stirling Ranges, which all have orange flowers. Around 150 species occur in Australia of which two are also found in New Guinea. Additionally, 24 species occur in New Caledonia, one of which is also found in Fiji, and one other species is endemic to Madagascar. The genus is currently being revised by Helmut Toelken of the South Australian Herbarium. 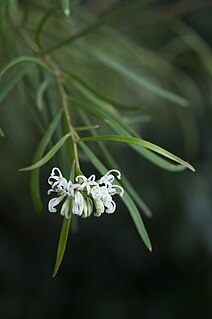 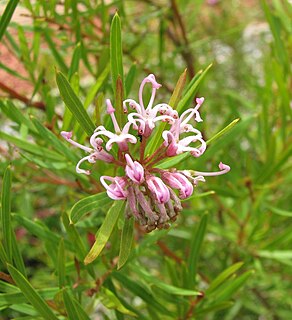 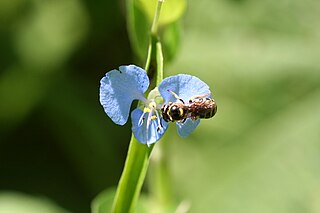 Commelina diffusa, sometimes known as the climbing dayflower or spreading dayflower, is a pantropical herbaceous plant in the dayflower family. It has been introduced to the southeastern United States where it is most common in wet disturbed soils. There are two recognised varieties, one being the type and the other being C. diffusa var. gigas, which is native to Asia and has been introduced to Florida. It flowers from spring to fall and is most common in disturbed situations, moist places and forests. In China the plant is used medicinally as a febrifuge and a diuretic. A blue dye is also extracted from the flower for paints. In the Hawaiian Islands, it is known as "honohono grass", although it is technically not a grass. "Honohono" refers to the alternating structure of the leaves. At least one publication lists it as an edible plant in New Guinea.

Threlkeldia is a genus of annuals or short-lived perennials in the family Amaranthaceae. There are two species, both of which are endemic to Australia. Together they occur in all Australian states except Queensland. 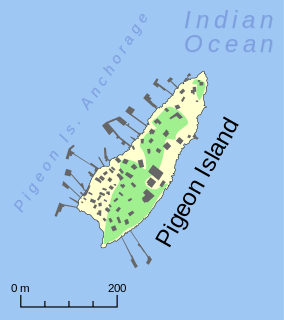 Pigeon Island is a small island located need the middle of the Wallabi Group of the Houtman Abrolhos, an archipelago off the coast of Western Australia. It is almost entirely given over to western rock lobster fishers' camps, and as a result is far more disturbed than most other islands in the archipelago. A nearby island also seasonally populated by fishers is named Little Pigeon Island, hence Pigeon Island is sometimes referred to as "Big Pigeon Island".

Commelina cyanea, commonly known as scurvy weed, is a perennial prostrate herb of the family Commelinaceae native to moist forests and woodlands of eastern Australia, Lord Howe Island and Norfolk Island. The blue flowers appear over the warmer months and are pollinated by bees and flies.

Lawrencia is a plant genus in the family Malvaceae. The genus is endemic to Australia.

Boerhavia diffusa is a species of flowering plant in the four o'clock family which is commonly known as punarnava, red spiderling, spreading hogweed, or tarvine. It is taken in herbal medicine for pain relief and other uses. The leaves of Boerhavia diffusa are often used as a green vegetable in many parts of India.

Montia diffusa is a species of flowering plant in the Montiaceae family known by the common names branching montia and spreading miner's lettuce. It is native to western North America from British Columbia to northern California, where it occurs mainly west of Cascade Range crest. It grows in moist to wet wooded areas, including areas recently affected by wildfire.

Canscora diffusa is a plant species in the genus Canscora. Diffutidin and diffutin are flavans, a type of flavonoid, found in C. diffusa.

Hedeoma diffusa is a species of flowering plant in the mint family known by the common names spreading false pennyroyal and Flagstaff false pennyroyal. It is endemic to Arizona in the United States.

Eutaxia diffusa, commonly known as spreading eutaxia, is a shrub species in the family Fabaceae. The species is endemic to Australia.

Eutaxia microphylla, also known as common eutaxia, is a shrub species in the family Fabaceae. The species is endemic to Australia.

Metrosideros diffusa, the white rātā, climbing rātā or in Māori akakura, is a forest liane or vine endemic to New Zealand. It is one of a number of New Zealand Metrosideros species which live out their lives as vines, unlike the northern rata (M.robusta), which generally begins as a hemi-epiphyte and grows into a huge tree. It is one of three white flowering rātā vines. White rātā is the most common climbing rātā in the wild, found naturally in lowland forests throughout the North, South and Stewart islands. 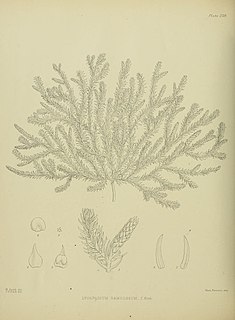 Lateristachys diffusa, synonym Lycopodiella diffusa, known as carpet clubmoss, is a species of clubmoss in the family Lycopodiaceae. It is indigenous to New Zealand and to Tasmania, Australia.

Eremophila shonae is a flowering plant in the figwort family, Scrophulariaceae and is endemic to Western Australia. It is an erect shrub or a low spreading shrub, depending on subspecies and has very sticky branches and leaves due to the presence of large amounts of resin. The leaves are narrow and the flowers are mauve to purple and white inside with purple spots.

Hibbertia diffusa is a species of perennial shrub, in the family Dilleniaceae, endemic to the south eastern region in Australia. It has yellow five-petalled flowers. Flowering occurs from spring to autumn. This plant often appears prostrate, and may reach 30 cm in height. The habitat is open forest on the coast and nearby mountain ranges. Heathland plants on headlands by the sea are many branched with entire leaves, 4 to 5 mm long. This plant appeared in scientific literature in 1817 in the Regni Vegetabilis Systema Naturale published by the Swiss botanist Augustin Pyramus de Candolle.

Tremandra diffusa is a species of flowering plant in the family Elaeocarpaceae. It is a small shrub with white flowers and green oval shaped leaves.