Threlkeldia is a genus of annuals or short-lived perennials in the family Amaranthaceae. There are two species, both of which are endemic to Australia. Together they occur in all Australian states except Queensland. 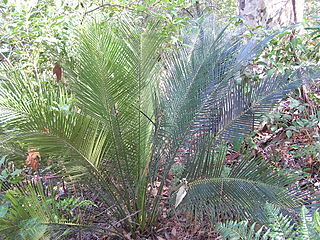 Macrozamia is a genus of around forty species of cycads, family Zamiaceae, all of which are endemic to Australia. Many parts of the plant have been utilised for food and material, most of which is toxic if not processed correctly.

The hairpin banksia is a species of woody shrub, of the genus Banksia in the family Proteaceae, native to eastern Australia. Widely distributed, it is found as an understorey plant in open dry forest or heathland from Victoria to northern Queensland, generally on sandstone though sometimes also clay soils. It generally grows as a small shrub to 2 metres (7 ft) in height, though can be a straggly tree to 6 metres (20 ft). It has long narrow leaves with inflorescences which can vary considerably in coloration; while the spikes are gold or less commonly yellowish, the emergent styles may be a wide range of colours – from black, purple, red, orange or yellow.

Banksia tricuspis, commonly known as Lesueur banksia or pine banksia, is a plant in the family Proteaceae and is endemic to a small area in the south-west of Western Australia. It is a stunted tree or shrub with narrow leaves and cylindrical spikes of golden-coloured flowers and it occurs in a geographic range of just 15 square kilometres near Jurien.

Grevillea aspleniifolia, in the family Proteaceae, is endemic to New South Wales, Australia. 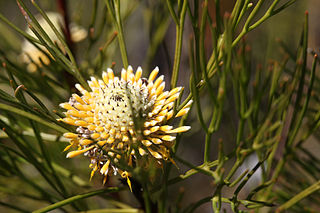 Lambertia is a genus of flowering plants, belonging to the family Proteaceae. It is endemic to Australia. The genus was named in 1798 by Sir James Edward Smith in honour of English botanist Aylmer Bourke Lambert.

Callitris macleayana is a species of conifer in the family Cupressaceae, endemic to Australia. The tree is commonly known as stringybark pine, as well as brush cypress pine and Port Macquarie pine, although it does not belong to the pine genus or family. Stringybark pine is found in two regions of Australia's East coast, one in the centre and one in the North.

Glischrocaryon is a genus of flowering plants in the family Haloragaceae, endemic to Australia. Species occur in New South Wales, Victoria, South Australia and Western Australia include: 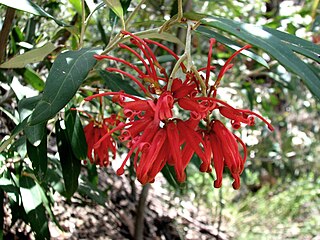 Grevillea victoriae, also known as royal grevillea or mountain grevillea, is a shrub which is endemic to south-eastern New South Wales and mountainous parts of Victoria in Australia.

Aphanopetalum is a genus of twining shrubs or vines in the family Aphanopetalaceae which are endemic to Australia.

Lawrencia is a plant genus in the family Malvaceae. The genus is endemic to Australia.

Grevillea iaspicula, also known as Wee Jasper grevillea, is a species of endangered shrub that is endemic to southern New South Wales.

Telopea oreades, commonly known as the Gippsland-, mountain- or Victorian waratah, is a large shrub or small tree in the family Proteaceae. Native to southeastern Australia, it is found in wet sclerophyll forest and rainforest on rich acidic soils high in organic matter. No subspecies are recognised, though a northern isolated population hybridises extensively with the Braidwood waratah (T. mongaensis). Reaching a height of up to 19 metres, T. oreades grows with a single trunk and erect habit. It has dark green leaves with prominent veins that are 11–28 centimetres (4.3–11 in) long and 1.5–6 cm (0.6–2.4 in) wide. The red flower heads, known as inflorescences, appear in late spring. Each is composed of up to 60 individual flowers. 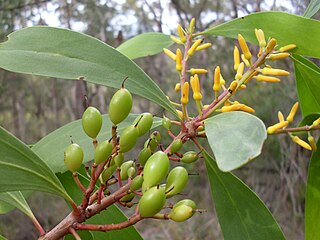 Persoonia levis, commonly known as the broad-leaved geebung, is a shrub native to New South Wales and Victoria in eastern Australia. It reaches 5 m (16 ft) in height and has dark grey papery bark and bright green asymmetrical sickle-shaped leaves up to 14 cm (5.5 in) long and 8 cm (3.2 in) wide. The small yellow flowers appear in summer and autumn, followed by small green fleshy fruit, which are classified as drupes. Within the genus Persoonia, it is a member of the Lanceolata group of 58 closely related species. P. levis interbreeds with several other species where they grow together.

Acacia lineataA.Cunn. ex G.Don, commonly known as streaked wattle or narrow lined-leaved wattle, occurs naturally inland eastern Australia. The genus Acacia is the largest genus of flowering plants in Australia, containing around 1000 species throughout a diverse range of environments from coast to desert.

Grevillea brevifolia, commonly known as Cobberas grevillea, is a species of the plant genus Grevillea. It is native to the states of Victoria and New South Wales in Australia. The red flowers appear between November and December in the species' native range. The species was first formally described by Victorian Government Botanist Ferdinand von Mueller in 1879 in Flora Australiensis, based on a collection from Mount Tambo in Victoria. The former subspecies G. brevifolia subsp. polychroma was elevated to species status as Grevillea polychroma in 2005. Grevillea brevifolia is listed as "Rare in Victoria" in the Department of Environment and Primary Industries' Advisory List of Rare Or Threatened Plants In Victoria. The species occurs in sub-alpine areas including the Pilot Wilderness, the Cobberas-Tingaringy Unit of the Alpine National Park, and Mount Seldom Seen.

Grevillea ramosissima, commonly known as fan grevillea, is a shrub species of the family Proteaceae. It is native to south-eastern Australia.

Grevillea kennedyana is a sprawling shrub of the genus Grevillea. It is only found in a small part of Australia, with a natural range less than 100 km. It is considered a vulnerable under federal and state legislation. G. kennedyana is also known as the flame spider-flower. 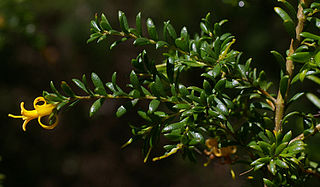 Persoonia terminalis, also known as the Torrington geebung, is a rare shrub belonging to the family Proteaceae, and native to northern New South Wales and southern Queensland in eastern Australia. Reported as a subspecies of Persoonia nutans in 1981, it was described as a species by Lawrie Johnson and his colleague Peter Weston in 1991.