Thuiaria articulata, the jointed hydroid or sea spleenwort, is a branching colonial hydroid in the family Sertulariidae. [1]

Jointed hydroids look like a child's drawing of a Christmas tree. They have an upright stem with side branches that emerge in pairs and extend upwards from the 'trunk'. The branches all grow in one plane. The colony is usually 4–8 cm in total height but may grow to 22 cm. [2]

This colonial animal is found off the length of the South African coast down to 135m under water. It is also found at Vema Seamount. [2]

Jointed hydroids live in sheltered areas and are common on the southern Cape coast. The reproductive bodies are ovoid with a distinct depression in their apex. [2]

The following species are considered synonyms of Thuiaria articulata: [1] 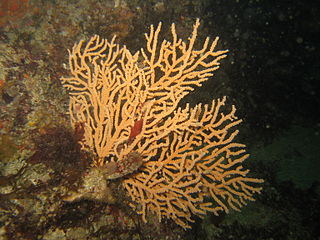 Eunicella verrucosa, the broad sea fan, pink sea fan or warty gorgonian, is a species of colonial Gorgonian "soft coral" in the family Gorgoniidae. It is native to the north-eastern Atlantic Ocean and the western Mediterranean Sea. 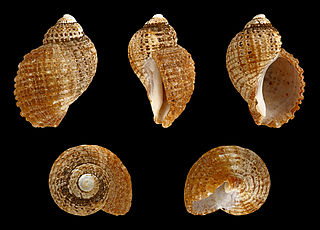 Nucella squamosa, common name the scaly dogwhelk, is a species of sea snail, a marine gastropod mollusk in the family Muricidae, the murex snails or rock snails. 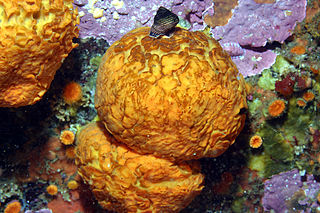 Tethya aurantium, also known as the golf ball sponge or orange puffball sponge, is a species of sea sponge belonging to the family Tethyidae. It is spherical in shape, with a warty surface, and grows to about 10 cm in diameter. Oscula are present on the upper surface. The surface has sharp protruding spicules which can cause skin irritation if touched.

Leptogorgia is a genus of soft coral in the family Gorgoniidae. The genus has a widespread distribution with members being found in the eastern Atlantic Ocean from Western Europe to South Africa, the Mediterranean Sea, the Atlantic coasts of North and South America, the Antilles and the Pacific coast of America. Species are found in both shallow and deep waters. 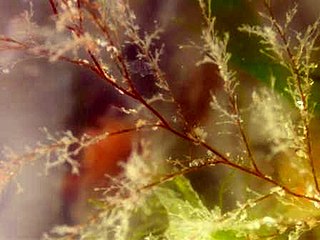 Obelia longissima is a colonial species of hydrozoan in the order Leptomedusae. Its hydroid form grows as feathery stems resembling seaweed from a basal stolon. It is found in many temperate and cold seas world-wide but is absent from the tropics.

The tubular sponge hydroid is a species of hydroid cnidarian. It is a member of the family Tubulariidae. These animals usually grow embedded in sponges.

The grey fan hydroid is a large colonial hydroid in the family Solanderiidae. 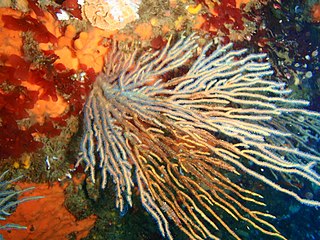 Solanderia is the sole genus of hydrozoans in the monotypic family Solanderiidae. They are commonly known as tree hydroids or sea fan hydroids. 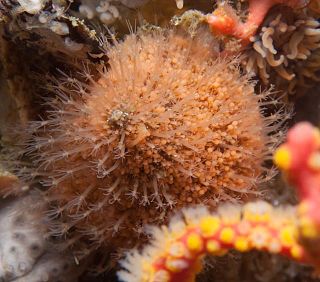 Hydractinia altispina, or high-spined commensal hydroid, is a small colonial hydroid in the family Hydractiniidae.

Stylaster nobilis, the noble coral, is a branching colonial hydroid in the family Stylasteridae.

The planar hydroid is a branching colonial hydroid in the family Sertulariidae.

Corhiza scotiae, the fine hydroid, is a delicate colonial hydroid in the family Halopterididae.

Gattya humilis, the snowdrop hydroid, is a delicate colonial hydroid in the family Halopterididae.

Pycnotheca mirabilis, The feathery hydroid, is a colonial hydroid in the family Kirchenpaueriidae. Feathery hydroids are often white and grow in crowded colonies resembling upright feathers. The stems may grow to 3 cm in total height. The reproductive bodies are found at the base of the stems and resemble beehives.

Clathria prolifera, commonly known as red beard sponge, is a species of sea sponge in the family Microcionidae. It is native to shallow water habitats in the western Atlantic Ocean from Prince Edward Island southwards to Florida and Mexico, and possibly Brazil. In the twentieth century it also became established on the west coast of the United States.

Plumapathes pennacea is a species of black coral in the order Antipatharia. It is found in the tropical Indian, Pacific and Atlantic Oceans in deep reef habitats where it forms part of a biologically diverse community. 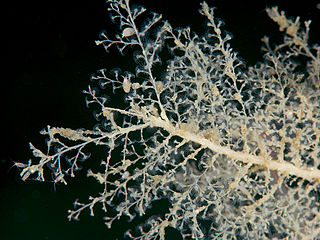 Halecium muricatum, commonly known as the sea hedgehog hydroid, is a species of hydrozoan in the family Haleciidae. It occurs mainly in arctic and northern temperate waters, in both the Atlantic and Pacific Oceans. 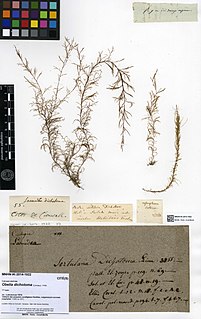 Obelia dichotoma is a broadly distributed, mainly marine but sometimes freshwater, colonial hydrozoan in the order Leptothecata that forms regular branching stems and a distinctive hydrotheca. O. dichotoma can be found in climates from the arctic to the tropics in protected waters such as marches and creeks but not near open coasts like beaches in depths up to 250m. O. dichotoma uses asexual and sexual reproduction and feeds on mainly zooplankton and fecal pellets. Obelia dichotoma has a complex relationship with the ecosystem and many economic systems. 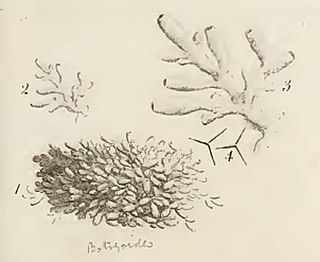 The orange pipe sponge, sometimes referred to as the orange pipe calcerous sponge or Leucosolenia botryoides, is a soft, white sponge with a tubular branching structure. The name is derived from the Greek word, "botrys", which means "cluster of grapes", relating to the branched structure of the sponge. It was originally found and named Spongia botryoides and given the common name "grape sponge" by researchers John Ellis and Daniel Charles Solander in 1786 before it was discovered to be a part of the genus Leucosolenia and changed to the orange pipe sponge. In Ellis and Solander's discovery, they described the sponge as "tender and branched as in bunches" where the "bunches are hollow." It is considered an asconoid sponge because it has no definitive shape.