Thuiaria is a genus of hydroids in the family Sertulariidae. [1] 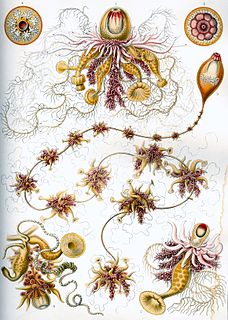 Hydrozoa are a taxonomic class of individually very small, predatory animals, some solitary and some colonial, most living in salt water. The colonies of the colonial species can be large, and in some cases the specialized individual animals cannot survive outside the colony. A few genera within this class live in fresh water. Hydrozoans are related to jellyfish and corals and belong to the phylum Cnidaria.

The following species are classed in this genus: [1]

Thuiaria articulata, the jointed hydroid or sea spleenwort, is a branching colonial hydroid in the family Sertulariidae.

These are lists of territorial governors by century and by year, such as the administrators of colonies, protectorates, or other dependencies. Where applicable, native rulers are also listed.

Sertulariidae is a family of hydrozoans.

Sertularella is a genus of hydroids in the family Sertulariidae.

Plumularia is a genus of hydrozoans in the family Plumulariidae. 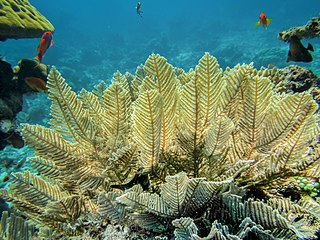 Aglaophenia is a genus of hydrozoans in the family Aglaopheniidae.

Macrorhynchia is a genus of hydroids in the family Aglaopheniidae.

Campanularia is a genus of hydrozoans, in the family Campanulariidae.

Sertularia is a genus of hydroids in the family Sertulariidae.