Thunderball is the soundtrack album for the fourth James Bond film Thunderball .

The album was first released by United Artists Records in 1965 in both monaural and stereo editions,with a CD release in 1988. [1] The music was composed and conducted by John Barry,and performed by the John Barry Orchestra. This was Barry's third soundtrack for the series. The soundtrack was still being recorded when it came time for the album to be released,so the LP only featured twelve tracks from earlier in the film;an expanded edition with six bonus tracks was released for the first time when the album was reissued on Compact Disc on 25 February 2003 as part of the "James Bond Remastered" collection. Additionally,the music in the film was unfinished days before the film's release in theatres due to a late change by Eon Productions to use a title song with the same name as the film.

The original main title theme to Thunderball was titled "Mr. Kiss Kiss,Bang Bang",which was written by John Barry and Leslie Bricusse. The title was taken from an Italian journalist who in 1962 dubbed agent 007 as "Mr. Kiss Kiss,Bang Bang". Barry had thought he could not write a song about a vague "Thunderball" term or the film's story,so his song was a description of the character James Bond. [2]

The song was originally recorded by Shirley Bassey. When there were concerns with the length of the track compared to the needed titles,it was later rerecorded by Dionne Warwick as Bassey was not available and featured a longer instrumental opening designed so the lyrics would not be heard until after the title "Thunderball" appeared in Maurice Binder's title design. [3] Neither version was released until the 1990s. The song was removed from the title credits after United Artists requested that the theme song contain the film's title in its lyrics. [4] When it was planned to use the Warwick version in the end titles Shirley Bassey sued the producers [5] [6] with the result being that neither version was heard in the film and different instrumental versions of the theme appeared on the High Fidelity (Bassey's) and Stereo (Warwick's) soundtrack LPs. [7]

Barry teamed up with lyricist Don Black and wrote "Thunderball" in a rush. [8] Tom Jones,who sang the new theme song,allegedly fainted in the recording booth after singing the song's final,high note. [8] Jones said of the final note,"I closed my eyes and I held the note for so long when I opened my eyes the room was spinning." [9]

Country musician Johnny Cash also submitted a song to Eon productions titled "Thunderball" but it was not used. [10] The lyrics of Cash's "Thunderball" describe the film's story. [11]

The producers' decision to change the film's theme song so close to the release date meant that only some of the film's soundtrack had been recorded for release on LP. [8] Adding to the delay issues,Barry had written large amounts of the score around the original theme and woven it throughout the score (along with the recurring underwater "Search For Vulcan" motif). After "Thunderball" was written,Barry wrote,orchestrated,and recorded several new pieces interpolating it.

Though "Mr. Kiss Kiss Bang Bang" was dropped as the theme song,some of the pieces which included its melody remained part of the score,and it receives full statements twice:by full orchestra and jazz rhythm quartet with bass,drums,guitar,and vibraphone in the track "CaféMartinique" (immediately followed by the "Vulcan" cue),and as a wild,bongo-laden cha-cha-cha in "Death of Fiona." The scene which includes the latter takes place at Club Kiss Kiss,and features the bongo drumming of bandleader King Errisson.

The tune was composed in the key of B-flat minor. [12] 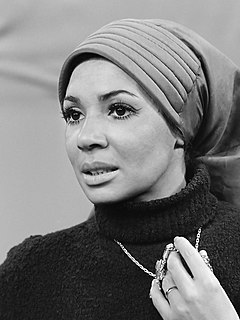 Dame Shirley Veronica Bassey is a Welsh singer. Best known for her career longevity, powerful voice and recording the theme songs to three James Bond films, Bassey is widely regarded as one of the most popular vocalists in Britain. 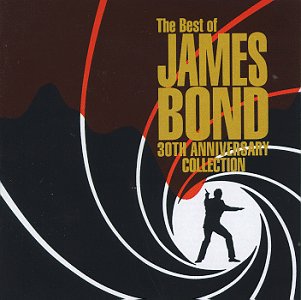 The Best of Bond... James Bond is the title of various compilation albums of music used in the James Bond films made by Eon Productions up to that time. The album was originally released in 1992 as The Best of James Bond, as a one-disc compilation and a two-disc 30th Anniversary Limited Edition compilation with songs that had, at that point, never been released to the public. The single disc compilation was later updated four times in 1999, 2002, 2008, and 2012. The 2008 version was augmented with the addition of a DVD featuring music videos and a documentary. Another two-disc edition, this time containing 50 tracks for the 50th anniversary of the franchise, was released in 2012. 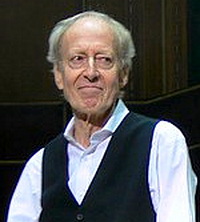 John Barry Prendergast was an English composer and conductor of film music.

The James Bond film series from Eon Productions has featured numerous musical compositions since its inception 1962, many of which are now considered classic pieces of British film music. The best known of these pieces is the "James Bond Theme" by Monty Norman. Other instrumentals, such as "On Her Majesty's Secret Service", and various songs performed by several notable British or American artists, such as Shirley Bassey's "Goldfinger", Nancy Sinatra's "You Only Live Twice", Paul McCartney's "Live and Let Die", Carly Simon's "Nobody Does It Better", Sheena Easton's "For Your Eyes Only", Duran Duran's "A View to a Kill", Tina Turner's "Goldeneye" also become identified with the series and Madonna's "Die Another Day", a dance hit around the world, while A View to a Kill becomes the first and only James Bond song to have reached number one on the US Billboard Hot 100. Three Bond songs have won the Academy Award for Best Original Song: "Skyfall" by Adele, "Writing's on the Wall" by Sam Smith and "No Time to Die" by Billie Eilish, with Writing's on the Wall also became the first Bond theme to reach number one on the UK Singles Chart. 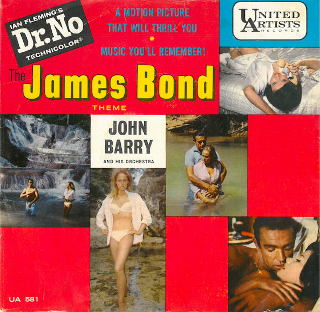 The "James Bond Theme" is the main signature theme music of the James Bond films and has featured in every Eon Productions Bond film since Dr. No, released in 1962. Composed by Monty Norman, the piece has been used as an accompanying fanfare to the gun barrel sequence in every Eon Bond film besides the 2006 reboot Casino Royale.

Victor Harold Flick is an English studio guitarist, best known for playing the guitar riff in the "James Bond Theme". 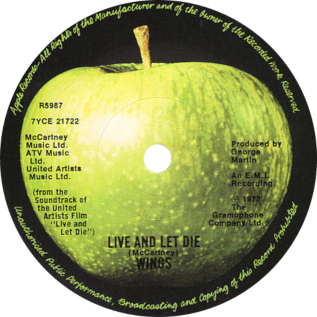 "Live and Let Die" is the theme song of the 1973 James Bond film of the same name, performed by the British–American rock band Wings. Written by English musician Paul McCartney and his wife Linda McCartney, it reunited McCartney with former Beatles producer George Martin, who produced the song and arranged the orchestra. McCartney was contacted to write the song by the film's producers Harry Saltzman and Albert R. Broccoli before the screenplay was finished. Wings recorded "Live and Let Die" during the sessions for Red Rose Speedway in October 1972 at AIR Studios. It was also the first rock song to open a Bond film. Another version by B. J. Arnau also appears in the film.

Thunderball is a 1965 British spy film and the fourth in the James Bond series produced by Eon Productions, starring Sean Connery as the fictional MI6 agent James Bond. It is an adaptation of the 1961 novel of the same name by Ian Fleming, which in turn was based on an original screenplay by Jack Whittingham devised from a story conceived by Kevin McClory, Whittingham, and Fleming. It was the third and final Bond film to be directed by Terence Young, with its screenplay by Richard Maibaum and John Hopkins. 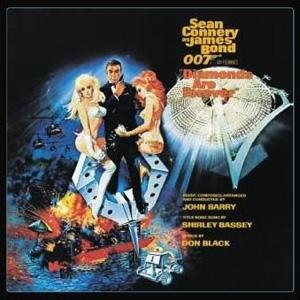 Diamonds Are Forever is the soundtrack by John Barry for the seventh James Bond film of the same name. 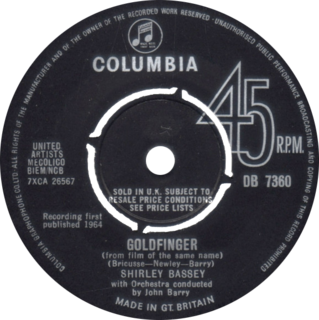 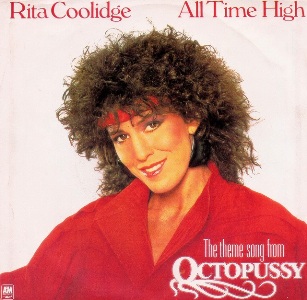 "All Time High" is a song by American singer-songwriter Rita Coolidge that serves as the theme song to the James Bond film Octopussy (1983). Written by John Barry and Tim Rice and produced by Stephen Short and Phil Ramone, the song was released through A&M Records in 1983.

Tomorrow Never Dies: Music from the Motion Picture is the soundtrack of the 18th James Bond film of the same name. 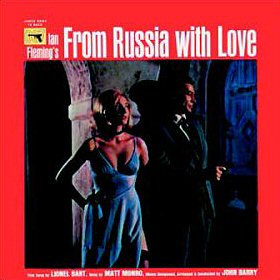 From Russia with Love is the soundtrack for the second James Bond film, From Russia With Love. This is the first series film with John Barry as the primary soundtrack composer. 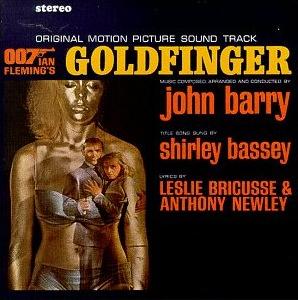 Goldfinger is the soundtrack of the 1964 film of the same name, the third film in the James Bond film series, directed by Guy Hamilton. The album was composed by John Barry and distributed by EMI. Two versions were released initially, one in the United States and the United Kingdom, which varied in terms of length and which tracks were within the soundtrack. In 2003, Capitol-EMI records released a remastered version that contained all the tracks within the film. 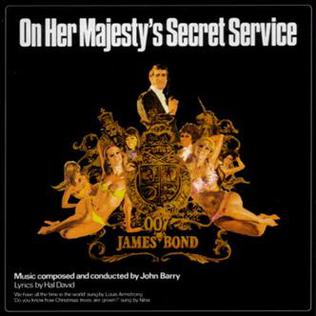 On Her Majesty's Secret Service ("OHMSS") is the soundtrack for the James Bond film. It was composed, arranged, and conducted by John Barry; his fifth in the series.

Moonraker is the soundtrack for the eleventh James Bond film of the same name.

A View to a Kill is the soundtrack for the film of the same name, the 14th instalment in the James Bond film series. 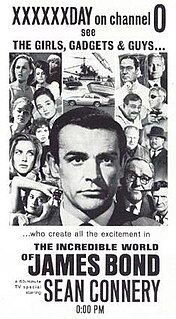 The Bond Collection, a.k.a. Bassey Sings Bond, is a 1987 studio album by Shirley Bassey, notable for having been released without the artist's consent and subsequently withdrawn from sales by court order.