Thuntata [2] is a 2002 Kannada romantic-comedy film directed by Indrajit Lankesh featuring Anirudh, Rekha Vedavyas and Chaya Singh. The film released on 24 May 2002. [3]

The Music was composed by Gurukiran and Released by Ashwini Recording Company. 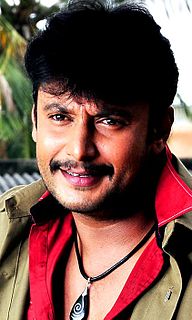 Darshan Thoogudeepa, known by his stage name Darshan, is an Indian film actor, producer and distributor, who works predominantly in the Kannada film industry. The son of actor Thoogudeepa Srinivas, Darshan began his acting career in soap operas and bit films in the mid-1990s. His first film in a lead role was in the 2001 film Majestic. 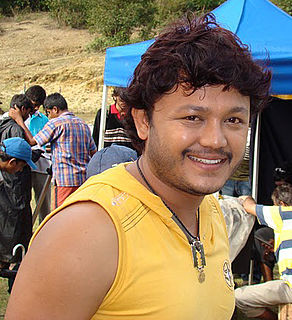 Chaya Singh is an Indian film and television actress. She started her acting career in Kannada films and has worked in Tamil, Kannada, Malayalam, Telugu, Bengali and Bhojpuri films. She has a reputation of being very selective in her roles.

Hudugaata is a 2007 Kannada film. The movie is based on the 1934 movie It Happened One Night which was already remade in 1956 as Chori Chori and in 1991 as Dil Hai Ke Manta Nahin.

Nagendra Prasad is an Indian dance choreographer and actor. He is the youngest son of dance master Mugur Sundar, and younger brother to popular cine artistes Prabhu Deva and Raju Sundaram.

Raaj-The Showman is a 2009 Kannada language drama film starring Puneeth Rajkumar and Priyanka Kothari, who made her debut in Kannada films. The film was directed by Prem. Pavan Ranadheera, who was Associate Director and helped write the script, screenplay and dialogues 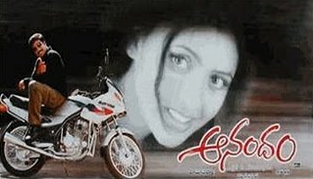 Anandam is a 2001 Indian Telugu-language romance film, directed by Srinu Vaitla and starring Jai Akash and Rekha Vedavyas in the lead roles. The music of the film was composed by Devi Sri Prasad. The film was a super hit and ran for 200 days. It was a commercial and critical success of the time. This film made Akash an overnight star of the Telugu film industry. The film was remade in Tamil as Inidhu Inidhu Kaadhal Inidhu and Kannada as Ananda, all three versions being produced by Ramoji Rao.

Huchcha is a 2001 Indian Kannada-language romantic action film directed by Om Prakash Rao, starring Sudeep and Rekha Vedavyas in the lead roles. The film, the Kannada remake of the 1999 Tamil film Sethu directed by Bala and starring Vikram, brought lot of fame to Sudeep. Earlier the script was rejected by Upendra and shivarajkumar

Jolly Boy is an Indian Kannada-language romantic drama film written and directed by Sabapathy Dekshinamurthy, which stars Diganth and Rekha Vedavyas in the lead roles, along with Devaraj, Tara and Sudha Rani. A remake of the director's 2011 Tamil film Pathinaaru, it is produced by K. Manju and features the music by Yuvan Shankar Raja.

Govindaya Namaha is a 2012 Indian Kannada language comedy-drama film directed by debutante Pawan Wadeyar. The film was released on 30 March 2012 across cinema halls. It stars Komal Kumar, Anna Georgia, Madhulika, Rekha Vedavyas and Parul Yadav in the lead roles. The music is composed by Gurukiran. This film is remade as Potugadu in Telugu. The movie was accused to be a copy of 2006 Kannada movie Avnandre Avne, however Karnataka Film Directors Association writer's wing set aside the allegations far from truth.

Dev S/O Mudde Gowda is a 2012 Kannada romantic comedy film loosely inspired by the Bollywood film Wake Up Sid. It stars Diganth and Charmee Kaur in the lead roles. Ananth Nag plays a prominent supporting role while the model-turned-actress Nathalia Kaur makes a special appearance. The film is directed and written by Indrajith Lankesh. Jassie Gift is the music director; Dharma Vish scored the background music and two songs which can be seen only in the movie. Shilpa Ramesh is the producer. Award-winning cinematographer Santosh Rai Pathaje is associated with this film as the camera man. It openrf across cinema halls on 6 April 2012.

Tennis Krishna is a popular Kannada actor and comedian. He has acted in several Kannada movies and is identified by his typical voice and mannerisms. Tennis Krishna has acted in over 600 movies and has a record of acting in 100 movies with comedy actress Rekha Das. His background is from Kannada theatre. Krishna was a tennis coach and hence got the name "Tennis Krishna" to make it easier to identify him from other Krishnas in the industry, including Honnavalli Krishna. He has acted with Legendary Kannada film industry stars like Dr. Rajkumar in the movie Jeevanachaitra and others. His first released Kannada, in a lead role for the first film was Appa Nanjappa Maga Gunjappa in 1994. After the success of Appa Nanjappa Maga Gunajappa Tennis Krishna acted in many more films mainly in comedy roles

Breaking News is a 2012 Kannada satirical comedy film directed, written and produced by Nagathihalli Chandrashekar. It stars Ajay Rao and Radhika Pandit in the lead roles while actor Ananth Nag makes a special appearance. Stephen Prayog is the music director and Krishna Kumar is the cinematographer of the film. The film got its theatrical release on 18 May 2012. 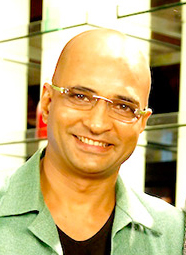 Indrajit Lankesh is an Indian filmmaker, producer, and director of Kannada, Telugu and Hindi films. He is also the publisher of the weekly Kannada tabloid Lankesh Patrike. He is the son of iconic writer, journalist and film maker P. Lankesh.

Chellata is a 2006 Indian Kannada language film directed by M. D. Sridhar and produced by Jagadish Kotyan under the Bhoomi Productions banner. It stars Ganesh, Rekha Vedavyas and Devaraj in pivotal roles. The soundtrack was composed by Gurukiran.

Benki Birugali is a 2013 Indian Kannada action comedy film directed and produced by S. K. Basheed. It was his debut in Kannada cinema as a lead actor. The film also has Rishi, Kadhal Sandhya, Rekha, Monica, Banu Mehra, "Bullet" Prakash, Layendra and Janardhan. K. S. Cheluvaraj was the cinematographer and M. M. Srilekha composed the music. The film was announced in January 2011. It was shot at various locations in Karnataka and Andhra Pradesh.

Monalisa is a 2004 Indian Kannada romance film written and directed by Indrajit Lankesh. The film stars Dhyan and Sadha in lead roles and prominent actors such as Darshan and Rekha Vedavyas have done cameo appearances. The film is produced by K. S. Dushyanth and K. Santhosh Kumar. 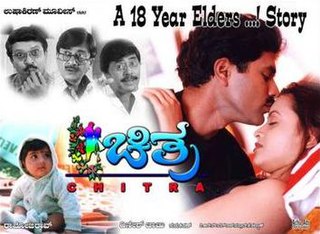 Chithra is a 2001 Indian Kannada romantic drama film directed by Dinesh Babu and produced by Ramoji Rao. A remake of Telugu film Chitram (2000), directed by Teja, the film features Ananth Nag alongside newcomers Nagendra Prasad and Rekha Vedavyas in the lead roles. The film had the musical score by Gurukiran which was well received. The film, upon release, was well received and declared a blockbuster at the box-office by running 125 days

Majaa Talkies is an Indian sketch comedy show that premiered on ETV Kannada on 7 February 2015. The episodes focus on comical scripts and usually feature celebrity guests who are invited on the show to promote their latest films in the comedy-focused talk show format. The show became Karnataka's highest rated scripted TV show in June 2015. As of September 2015, the show achieved maximum TRP and clinched the number one spot in Kannada television.