Thymic carcinoma is a rare type of thymus gland cancer. It usually spreads, has a high risk of recurrence, and has a poor survival rate. Thymic carcinoma is divided into subtypes, depending on the types of cells in which the cancer began. Also called type C thymoma. [1] 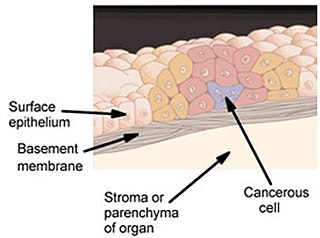 Carcinoma in situ (CIS) is a group of abnormal cells. While they are a form of neoplasm, there is disagreement over whether CIS should be classified as cancer. This controversy also depends on the exact CIS in question. Some authors do not classify them as cancer, however, recognizing that they can potentially become cancer. Others classify certain types as a non-invasive form of cancer. The term "pre-cancer" has also been used. 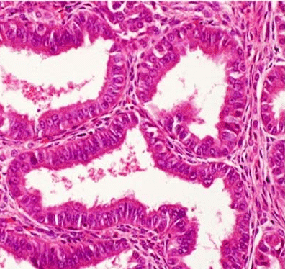 Endometrioid tumors are a class of tumor characterized by a resemblance to endometrium/ endometrial carcinoma, and over a third of cases have focal squamous differentiation.

Clear-cell carcinoma also known as clear cell adenocarcinoma and mesonephroma is an epithelial cell derived carcinoma characterized by the presence of clear cells observed during histological, diagnostic assessment. This form of cancer is classified as a rare cancer with an incidence of 4.8% in white patients, 3.1% in black patients, and 11.1% in Asian patients. 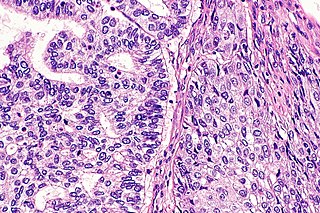 Adenosquamous carcinoma is a type of cancer that contains two types of cells: squamous cells and gland-like cells. It has been associated with more aggressive characteristics when compared to adenocarcinoma in certain cancers. It is responsible for 1% to 4% of exocrine forms of pancreas cancer.

Amelanotic melanoma is a type of skin cancer in which the cells do not make any melanin. They can be pink, red, purple or of normal skin color, and are therefore difficult to diagnose correctly. They can occur anywhere on the body, just as a typical melanoma can.

Choroid plexus tumors are a rare type of cancer that occur from the brain tissue called choroid plexus of the brain. These tumors usually occur in children younger than 2 years and are classified according to the WHO classification of the tumors of the central nervous system:

Medullary breast carcinoma is a rare type of breast cancer that often can be treated successfully. It is marked by lymphocytes in and around the tumor that can be seen when viewed under a microscope.

Metaplastic carcinoma, otherwise known as metaplastic carcinoma of the breast (MCB), is a heterogeneous group of cancers that exhibit varied patterns of metaplasia and differentiation along multiple cell lines. This rare and aggressive form of breast cancer is characterized as being composed of a mixed group of neoplasms containing both glandular and non-glandular patterns with epithelial and/or mesenchymal components. It accounts for fewer than 1% of all breast cancer diagnoses. It is most closely associated with invasive ductal carcinoma of no special type. (IDC), and shares similar treatment approaches. Relative to IDC, MCB generally has higher histological grade and larger tumor size at time of diagnosis, with a lower incidence of axillary lymph node involvement. MCB tumors are typically estrogen receptor (ER), progesterone receptor (PR), and human epidermal growth factor-2 (HER-2) negative, meaning hormone therapy is generally not an effective treatment option, which correlates to a relatively poor prognosis. MCB was first recognized as a distinct pathological entity in 2000 by the World Health Organization.

Spindle cell carcinoma is a type of cancer that begins in the skin or in tissues that line or cover internal organs and that contains long spindle-shaped cells. It is also called sarcomatoid carcinoma.

Mucinous carcinoma is a type of cancer that arises from epithelial cells; these line certain internal organs and skin, and produce mucin. 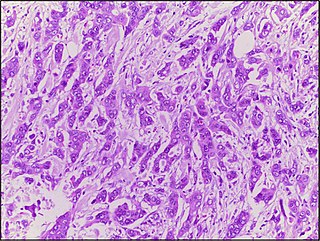 Ductal carcinoma is a type of tumor that primarily presents in the ducts of a gland.

Comedocarcinoma is a kind of breast cancer that demonstrates comedonecrosis, which is the central necrosis of cancer cells within involved ducts. Comedocarcinomas are usually non-infiltrating and intraductal tumors, characterized as a comedo-type, high-grade ductal carcinoma in situ (DCIS). However, there have been accounts of comedocarcinoma which has then diversified into other cell types and developed into infiltrating (invasive) ductal carcinoma. Recurrence and survival rates differ for invasive breast cancer which has originated as comedocarcinoma compared with other types of cancer cells.

A fungating lesion is a skin lesion that fungates, that is, becomes like a fungus in its appearance or growth rate. It is marked by ulcerations and necrosis and usually presents a foul odor. This kind of lesion may occur in many types of cancer, including breast cancer, melanoma, and squamous cell carcinoma, and especially in advanced disease. The characteristic malodorous smell is caused by dimethyl trisulfide. It is usually not literally a fungal infection but rather a neoplastic growth with necrosing portions.

Squamous cell carcinomas (SCCs), also known as epidermoid carcinomas, comprise a number of different types of cancer that result from squamous cells. These cells form on the surface of the skin, on the lining of hollow organs in the body, and on the lining of the respiratory and digestive tracts.