Tibbi is one of the seven tehsil headquarters of Hanumangarh district of Rajasthan state in India. It is at the junction of Haryana, Punjab, and Rajasthan states. The total population as of 2011 is 11,553.

It is also called the "Rice Belt of Rajasthan".[ citation needed ] Indira Gandhi Canal enters Rajasthan, from Punjab, at Masitawali and Talwara Jheel head village of Tibbi. The Ghaghar river (paleochannel of sacred Sarasvati River), which originates at Adi Badri, Haryana in Sivalik Hills in Haryana, also enter in Tibbi from Haryana, and it flows to Pakistan via Anupgarh and Ganganagar.

Thakur Parasaram Singh Gahlot(sisodiya) came from Kuchera to tibbi village in 1769 during the rule of Maharaja Gaj Singh of the princely state of Bikaner.At that time, Nagaur King Bakht Singh and Bikaner Maharaja Gaj Singh were jointly fighting with Jodhpur Maharaja Ram Singh in Nagaur.After defeating the Medtiyas, Gaj Singh gave villages as a reward to the assistant Thakurs.Then Thakur Parsaram Singh got the Bhomiyat of Tibi pargana by Gaj Singh in 1769 and they had share tibbi's land with DHAKA'S . He ended the Robbery and fear of Mushlim Akranta Sher Khan here. The village of Sherekan near Tibbi is named after the same robber.The "Gaddi" here was constructed by Bikaner Maharaj Surat Singh in 1801, which is currently the Tibbi police station.

Churu is a city in the desert region of Rajasthan state of India. It is known as the gateway to the Thar Desert of Rajasthan. It is the administrative headquarter of Churu District. It lies in the Thar Desert on the National Highway-65 connecting Pali to Ambala and is a junction station on the railway line to Bikaner. It is near the shifting sand dunes of the Thar Desert and has grand havelis with marvelous fresco paintings, namely Kanhaiya Lal Bagla Ki Haweli and Surana Haweli, with hundreds of small windows. It also has some fine Chhatris. Near the town is a religious seat of the Nath sect of Sadhus where there are life-size marble statues of their deities and a place for prayers. At the center of the town is a fort built about 500 years ago. 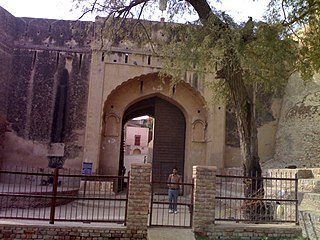 Hanumangarh is a city in the Indian state of Rajasthan, situated on the banks of the river Ghaggar also identified as Ancient Sarasvati river, located about 400 km from Delhi. It is the administrative seat of Hanumangarh District. The city was once called Bhatner because it was founded by king Bhupat in 255 AD. It remained in the control of the Rajputs of Bhati clan and later occupied by Maharaja Sooraj Singh of Bikaner.

Sri Ganganagar is a planned city and the northern-most city of the Indian state of Rajasthan, near the borders of Haryana and Punjab states and the international border of India and Pakistan. It is the administrative headquarters of Sri Ganganagar district. It is named after Maharaja Shri Ganga Singh Bahadur, Maharaja of Bikaner. It is known as "the food basket of Rajasthan".

Rajgarh is a town and tehsil in the Churu district of northern part of Rajasthan state in India. The railway station in Rajgarh is known as Sadulpur. To distinguish Rajgarh from places with similar names, Sadulpur has become a synonym of town's name in recent times. It is close to the Haryana border. Sadulpur Railway Junction lies on Bikaner-Churu-Sadulpur-Delhi, Hisar-Sadulpur-Loharu-Rewari and Hisar-Sadulpur-Churu railway route, Sriganganagar-Jaipur and Delhi- Sadulpur-Jodhpur routes.

Bikaner District is a district of the state of Rajasthan in western India. The historic city of Bikaner is the district headquarters. Bikaner is also Division with the four district: Bikaner, Churu, Sri Ganganagar and Hanumangarh.

Jodhpur District is a district in the State of Rajasthan in western India. The city of Jodhpur is the administrative headquarters of the district. 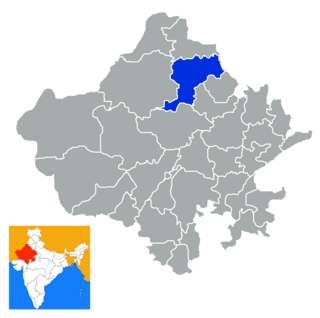 Churu district is a district of the Indian state of Rajasthan in northern India. The town of Churu is the administrative headquarters of the district. 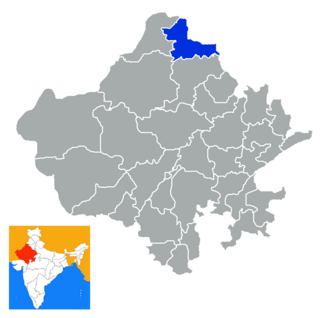 Hanumangarh district is a district in the state of Rajasthan in India. The city of Hanumangarh is the district headquarters and its largest city.

Sri Ganganagar district is a northernmost district of Rajasthan state in western India.

The Indira Gandhi Canal is the longest canal of India. It starts from the Harike Barrage at Harike, a few kilometers below the confluence of the Satluj and Beas rivers in the Indian state of Punjab and terminates in irrigation facilities in the Thar Desert in the north west of Rajasthan state. Previously known as the Rajasthan Canal, it was renamed the Indira Gandhi Canal on 2 November 1984 following the assassination of Prime Minister Indira Gandhi.

Bhadra is a city and a municipality in Hanumangarh district in the state of Rajasthan, India. 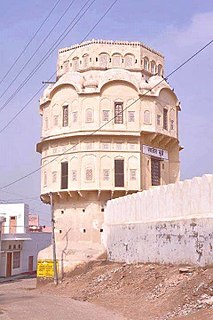 Rawatsar is a city, a municipality, and one of the seven tehsils in Hanumangarh district in the Indian state of Rajasthan. This City is divided into 35 wards for which elections are held every 5 years.

Sadulshahar is a town and a municipality in Ganganagar district in the Indian state of Rajasthan.

Sangaria is a town and municipality in the Hanumangarh district of the Indian state of Rajasthan. It is situated near the northern border of Rajasthan adjoining Haryana and Punjab states.

Degana is a town municipality and headquarter to Sub-Division and Tehsil located in Nagaur district of Rajasthan, India.

Rania is a city and a municipal committee Sirsa district in the Indian state of Haryana. Rania Town is the biggest grain market in Sirsa district.

Karoli is a village located in Kosli Tehsil, Rewari District, Haryana, India. It is on the 1.5-kilometre approach road boarded to Bahu-Jholri on the Kosli–Kanina road and is 12 kilometres from Kosli and 7 kilometres from Kanina. The villages is 125 kilometres from Delhi, the capital of India. It is a large village with an approximate population of 5,000 to 5,500. There is an average of one person in the army from each family. Smt. Kamala Devi is second ladies sarpanch of the village after Smt. Bhoori Devi. There are numerous temples in the village, of which that of Baba Thakur Ji has a special importance. All the villagers used to have dinner in the temple on Holi. The village school was earlier up to class 10 and due to excellent results in the entire district, the school has been upgraded to Senior Secondary School. The village was the birthplace of Hari Ram Arya, the Chairman of Haryana Azad Hind Fouj who participated in the Indian Independence Movement.

Sri Gurusar Modia is a village in the Indian state of Rajasthan situated near borders of Rajasthan, Haryana and Punjab states and the international border of India and Pakistan. This village is located in the tehsil Suratgarh of district Sriganganagar. Suratgarh, once known as Sodhal was believed to be surrounded by the confluence of Saraswati and Drishyati rivers but now the land is a deserted one lying amidst the expanse of The great Indian Thar desert. Suratgarh is famous for its agriculture,air force and army base stations, largest thermal power plant of Rajasthan and largest radio station of Rajasthan called as "Cotton City Channel". Sri Gurusar Modia came into limelight when revered saint Gurmeet Ram Rahim Singh was incarnated and crowned to the throne of Dera Sacchs Sauda at Sirsa in 1991. With setting up of Shah Satnam Schools for both boys and girls, super speciality hospitals etc. this village became nationwide popular

Ratanpura is a village in Rajgarh tehsil of Churu district in Rajasthan. It was established in 1848, and is situated 45 km northeast of Churu and 17 km southwest of Rajgarh.