Last updated September 14, 2021
Title of the elected head of a village in India

A sarpanch (IAST: Sarpañc) or gram pradhan or mukya is a decision-maker, elected by the village-level constitutional body of local self-government called the Gram Sabha (village government) in India. [1] The sarpanch, together with other elected panchayat members (referred to as commissioners or a panch), constitute gram panchayats and zilla panchayats. The sarpanch is the focal point of contact between government officers and the village community and retains power for five years.

Sar, meaning head, and panch meaning five, gives the meaning head of the five decision makers of the gram panchyat of the village.

In the state of West Bengal, a Sarpanch is termed as Panchayat Pradhan (Pradhan means Head) and his deputy as Upa-Pradhan.

In many states, elections were not held for decades and instead of elected sarpanches, the gram panchayats were run by bureaucratically appointed administrators. With the passage of 73rd and 74th Constitutional Amendments in 1992, a number of safeguards have been built in, including those pertaining to regular elections.

Article 243D(3) of the 73rd Constitutional Amendment requires one-third of seats in panchayats and one-third of panchayat chairperson positions be reserved for women, across all three levels of the panchayati raj system. [2] [3] :24 This amendment followed various state-level legislative reforms in which reservations were set for panchayat positions to be held by women. [3] :32

A Nyaya panchayat is a system of dispute resolution at the village level in the panchayati raj system of India.

The Ministry of Panchayati Raj is a branch of the Government of India.

Amruthalur is a village in Guntur district of the Indian state of Andhra Pradesh. It is the headquarters of Amruthaluru mandal in Tenali revenue division. The village forms a part of Andhra Pradesh Capital Region and is under the jurisdiction of APCRDA.

Municipal or local governance refers to the third tier of governance in India, at the level of the municipality or urban local body.

Panchayat may refer to:

Punsari is a village located in Sabarkantha district in the state of Gujarat, India. Punsari is considered as India's smartest village. The village is located at about 80km from the state capital, Gandhinagar. Punsari is 20km from Parvati Hills. Parvati Hills is the largest table top land of India. The village follows the Panchayati raj system. The village extent is about 65 km. The land in use of agriculture is 6 hectares. The main non farming activity is dairy in this village. The village has undergone a transformation under the panchayat. There has been use of new and advanced technology in education. This village has wi-fi connection for all people. Efforts have been made for the empowerment of women and increasing security in the village. Some of the facilities provided by the panchayat include local mineral water supply, sewer & drainage project, a healthcare centre, banking facilities and toll-free complaint reception service. Consequently, Punsari received the award of being the best Gram Panchayat in Gujarat. The village's model has been appreciated by delegates from Nairobi and they are keen to replicate this in Kenyan villages.

"Right To Recall (RTR)" are existing laws in some states of India that allow citizens to remove or replace public servants holding posts of Sarpanch, Mukhiya, Corporator and Mayor in the government. 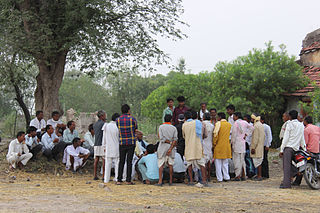 Caste panchayats, based on caste system in India, are caste-specific juries of elders for villages or higher-level communities in India. They are distinct from village panchayats in that the latter, as statutory bodies, serve all villagers regardless of caste, although they operate on the same principles. A panchayat can be permanent or temporary.

The Panchayat raj (panchayat "village council", raj "rule") is a political system, originating from the Indian subcontinent, found mainly in India, Pakistan, Bangladesh, Sri Lanka, and Nepal. It is the oldest system of local government in the Indian subcontinent, and historical mentions date to the 250 CE period. The word raj means "rule" and panchayat means "assembly" (ayat) of five (panch). Traditionally, Panchayats consisted of wise and respected elders chosen and accepted by the local community. These assemblies settled disputes between both individuals and villages. However, there were varying forms of such assemblies.

Block Pramukh (president) are Panchayats at the Apex or District Level in Panchayat Raj Institutions.

Oral democracy is a talk-based form of government and political system in which citizens of a determined community have the opportunity to deliberate, through direct oral engagement and mass participation, in the civic and political matters of their community. Additionally, oral democracy represents a form of direct democracy, which has the purpose of empowering citizens by creating open spaces that promote an organized process of discussion, debate, and dialogue that aims to reach consensus and to impact policy decision-making. Political institutions based on this idea of direct democracy seek to decrease the possibilities of state capture from elites by holding them accountable, to encourage civic participation and collective action, and to improve the efficiency and adaptability of development interventions and public policy implementation.