Tidarren sisyphoides is a spider of the family Theridiidae (tangle web spiders).

The male of this species is only 1% the size of the female. At copulation, the male dies during insertion and remains attached to the female for more than two hours. However, the female does not eat her mate. The dead male is afterwards removed from the web.

From Sisyphos , a king in Greek mythology.

Tidarren sisyphoides occurs from the southern United States to Colombia and on the West Indies. 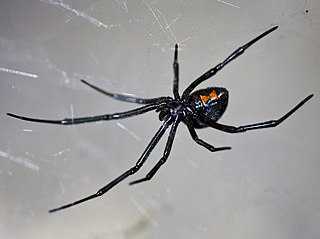 Latrodectus is a broadly distributed genus of spiders with several species that, together, are referred to as true widows. This group is composed of those often loosely called black widow spiders, brown widow spiders, and similar spiders. However, such general "common names" are of limited use as the diversity of species is much greater. A member of the family Theridiidae, this genus contains 32 species, which include several North American "black widows". In addition to these in North America are also the red widow Latrodectus bishopi and the brown widow Latrodectus geometricus, which, in addition to North America, has a much wider geographic distribution. Elsewhere, others include the European black widow, the Australian redback black widow, several different species in Southern Africa that can be called Button spiders, and the South American black widow spiders. Species vary widely in size. In most cases, the females are dark-coloured, but some may have lighter bodies or even reddish. Many can have red, white or brown markings on the upper-side (dorsal) of the abdomen. Some can be readily identifiable by reddish markings on the central underside (ventral) abdomen, which are often hourglass-shaped. 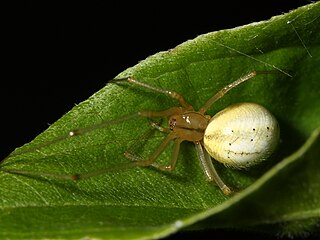 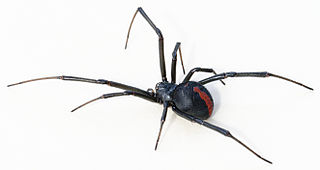 The redback spider, also known as the Australian black widow, is a species of highly venomous spider believed to originate in South Australia or adjacent Western Australian deserts, but now found throughout Australia, Southeast Asia and New Zealand, with colonies elsewhere outside Australia. It is a member of the cosmopolitan genus Latrodectus, the widow spiders. The adult female is easily recognised by her spherical black body with a prominent red stripe on the upper side of her abdomen and an hourglass-shaped red/orange streak on the underside. Females usually have a body length of about 10 millimetres (0.4 in), while the male is much smaller, being only 3–4 mm (0.12–0.16 in) long. 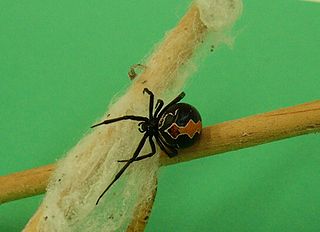 The katipō is an endangered species of spider native to New Zealand. It is one of many species in the genus Latrodectus, such as the Australian redback, and the North American black widow. The species is venomous to humans, capable of delivering a potentially dangerous bite. It is a small to medium-sized spider, with the female having a round black or brown pea-sized body. Red katipō females, found in the South Island and the lower half of the North Island, are always black, and their abdomen has a distinctive red stripe bordered in white. In black katipō females, found in the upper half of the North Island, this stripe is absent, pale, yellow, or replaced with cream-coloured blotches. These two forms were previously thought to be separate species. The male is much smaller than the female and quite different in appearance: white with black stripes and red diamond-shaped markings. Katipō are mainly found living in sand dunes close to the seashore. They are found throughout most of coastal New Zealand except the far south and west. Katipō feed mainly on ground dwelling insects, caught in an irregular tangled web spun amongst dune plants or other debris. 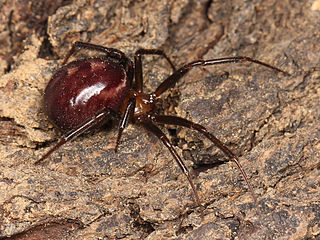 Steatoda grossa, commonly known as the cupboard spider, the dark comb-footed spider, the brown house spider, or the false widow, is a common species of spider in the genus Steatoda. 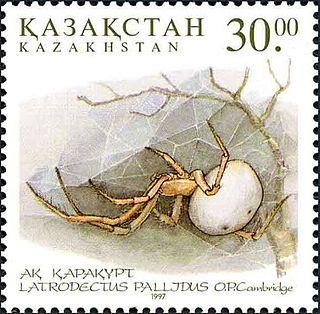 Latrodectus pallidus is a species of spider commonly found throughout North Africa, the Middle East, and central Asia. A common name in English is the white widow spider, and it is known in Russian as белый каракурт, or white steppe spider. It is a member of the genus Latrodectus, which includes species known as widow spiders, which is placed in the family Theridiidae. It occurs both in the steppes of southern Russia, Kazakhstan, and other southwest Asian countries, as well as in the desert regions of the Middle East. Compared to other widow spiders in the region, the white widow spider is comparatively rare. 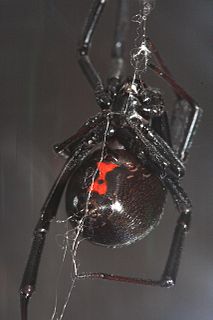 Latrodectus hesperus, the western black widow spider or western widow, is a venomous spider species found in western regions of North America. The female's body is 14–16 mm in length and is black, often with an hourglass-shaped red mark on the lower abdomen. This "hourglass" mark can be yellow, and on rare occasions, white. The male of the species is around half this length and generally a tan color with lighter striping on the abdomen. The population was previously described as a subspecies of Latrodectus mactans and it is closely related to the northern species Latrodectus variolus. The species, as with others of the genus, build irregular or "messy" webs: unlike the spiral webs or the tunnel-shaped webs of other spiders, the strands of a Latrodectus web have no apparent organization.

Steatoda nobilis is a spider in the genus Steatoda, known in the United Kingdom as the noble false widow and is often referred to as the false widow. As the common name indicates, the spider superficially resembles and is frequently confused for the black widow and other spiders in the genus Latrodectus. S. nobilis has medically significant venom, where in England, it has a reputation as one of the few local spider species that is capable of inflicting a painful bite to humans, with most bites resulting in symptoms similar to a bee or wasp sting.

Theridion grallator, also known as the Hawaiian happy-face spider, is a spider in the family Theridiidae that resides on the Hawaiian Islands. T. grallator obtains its vernacular name of "Hawaiian happy-face spider" from the unique patterns superimposed on its abdomen, specifically those that resemble a human smiling face. Its Hawaiian name is nananana makakiʻi. The specific epithet grallator is Latin for "stilt walker", a reference to the species' long, spindly legs. T. grallator is particularly notable because of its wide range of polymorphisms that may be studied to allow a better understanding of evolutionary mechanisms. In addition to the variety of color polymorphisms present in T. grallator, this spider also demonstrates the interesting quality of diet-induced color change, in which its appearance temporarily changes as it metabolizes various food items.

Spider behavior refers to the range of behaviors and activities performed by spiders. Spiders are air-breathing arthropods that have eight legs and chelicerae with fangs that inject venom. They are the largest order of arachnids and rank seventh in total species diversity among all other groups of organisms which is reflected in their large diversity of behavior.

Argyrodes argentatus is a kleptoparasitic spider. 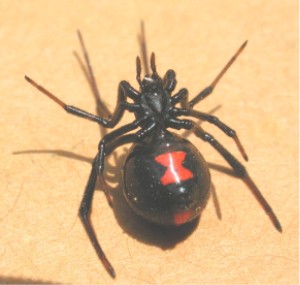 Sexual cannibalism is when a female cannibalizes her mate prior to, or after copulation. It is a trait observed in many arachnid orders and several insect orders. Several hypotheses to explain this seemingly paradoxical behavior have been proposed. The adaptive foraging hypothesis, aggressive spillover hypothesis and mistaken identity hypothesis are among the proposed hypotheses to explain how sexual cannibalism evolved. This behavior is believed to have evolved as a manifestation of sexual conflict, occurring when the reproductive interests of males and females differ. In many species that exhibit sexual cannibalism, the female consumes the male upon detection. Females of cannibalistic species are generally hostile and unwilling to mate; thus many males of these species have developed adaptive behaviors to counteract female aggression.

A social spider is a spider species whose individuals form relatively long-lasting aggregations. Whereas most spiders are solitary and even aggressive toward other members of their own species, some hundreds of species in several families show a tendency to live in groups, often referred to as colonies. 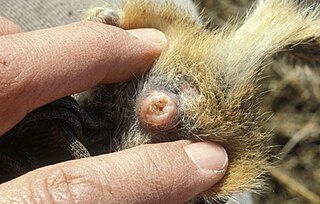 A mating plug, also known as a copulation plug, sperm plug, vaginal plug, sement or sphragis, is gelatinous secretion used in the mating of some species. It is deposited by a male into a female genital tract, such as the vagina, and later hardens into a plug or glues the tract together. While females can expel the plugs afterwards, the male's sperm still gets a time advantage in getting to the egg, which is often the deciding factor in fertilization.

Rugathodes sexpunctatus is a minute species of spider in the family Theridiidae, the cobweb or tangle-web spiders. This family includes the medically important genus Latrodectus—the widow spiders. The species in the genus Rugathodes are too small to be dangerous to humans. Very little is known about most species in this genus.

Tidarren argo is a spider from Yemen. The species is remarkable by its male amputating one of its palps before maturation and entering his adult life with one palp only. It adopts exceptional copulatory behaviour: when the male achieves genitalia coupling with his palp, the latter is torn off by the female. The separated gonopod remains attached to the female's epigynum for approximately 4 hours and continues to function independently, serving as a mating plug. While this happens, the female feeds on the male. Emasculation thus synchronizes sexual cannibalism and sperm transfer, lengthening the interval between copulations. This mating behaviour might allow for the continuation of insemination by the dismembered palp.

Tidarren haemorrhoidale is a species of spider in the family Theridiidae. It is found in a range from the United States to Argentina.

Latrodectus revivensis, also known as the desert widow, is a species of venomous spider belonging to the Latrodectus genus and located in the Negev desert and the Arava valley (Arabah).