The Tomifobia River is a flowing body of fresh water in Memphremagog Regional County Municipality, in the Eastern Townships, in the province of Quebec, in Canada. The river forms a part of an international border between Canada and the United States near the village of Beebe Plain, Vermont.

Located at fifteen minutes by car from Magog, Quebec, the "Tomifobia Nature Trail" with a length of 19 kilometres (12 mi) links the Lake Massawippi (either Ayer's Cliff, Quebec) to Beebe Plain, Vermont along the west bank of the Tomifobia river, through Stanstead, Quebec which is located before the border Quebec-Vermont. This trail in the heart of a linear park of 140 acres, also interconnects to other paths in Vermont. This trail is mostly used in three seasons by cyclists, hikers, runners feet; and in winter by cross-country ski enthusiasts. This trail is a preferred corridor for wildlife observation of animal and flora in a wild nature and the flowing Tomifobia river at the center of this little valley. This linear park attracts thousands of visitors who enjoy including three car parking lots Ayer's Cliff allowing them to take the path. [1]

River catchment neighbors of the Tomifobia are:

Part of the river's watershed extends into Vermont. US lands draining into the river directly or indirectly include: Derby, Holland, and a small portion of Norton, Holland and Beaver Ponds. [3]

While a study by Roberge & Roy (2004) suggests there is little continuously suspended sediment in the river, there are some concerns about the expansion of the Tomifobia delta at the mouth of Lake Massawippi. Research indicates that this delta has been built through sporadic hydrological events rather than through agricultural catchment. Nevertheless, agricultural practices have undoubtedly contributed to the high levels of phosphates detected in lower portions of the river following periods of heavy rainfall.

Although its meaning is unknown, the origin of the word "Tomifobia" is likely Algonquian, the language spoken by the Abenaki tribes that seasonally travelled on the lake and river systems of the Eastern Townships prior to European settlement. An important link between the Connecticut and Saint Lawrence basins, the Tomifobia River is one of the most southern rivers to flow northward and eventually drain into the Saint Lawrence (via the Saint Francis). The Abenaki allied themselves with France during the French and Indian Wars and the Tomifobia valley remained part of New France until the 1763 Treaty of Paris, which granted the region to the English. Cited on maps as the "Barlow River" prior to 1900, the Tomifobia River valley was settled by United Empire Loyalists in the late 18th-century soon after the Constitutional Act of 1791 opened the land of what was then Lower Canada. Significant communities developed around a series of mills that were built on the river in the early part of the 19th-century , leading to the establishment of Boynton, Tomifobia [formerly Smith's Mills], and Stanstead Plain [Kilborn's Mills]. Each of these villages became stops along an important stagecoach and later railroad route between Boston and Montreal (the Massawippi Valley Railroad became part of the Boston and Maine Railroad network in 1867).

The 19-kilometre (12 mi) Tomifobia Nature Trail, formerly a CP Rail/Quebec Central Railway bed, borders much of the river between the villages of Ayer's Cliff, Quebec and Beebe Plain, passing through the hamlets of Tomifobia and Boynton.

Historically, mills situated along the river would have dominated the economy of the region, along with agricultural activities in the surrounding countryside. Today the Tomifobia River is an important tourist attraction, offering recreational summer activities including canoeing/kayaking, cycling, hiking, bird watching, and sport fishing. Wintertime attractions include cross-country skiing and snow-shoeing. [ citation needed ]

The Eastern Townships is an historical administrative region in southeastern Quebec, Canada. It lies between the St. Lawrence Lowlands and the American border, and extends from Granby in the southwest, to Drummondville in the northeast. Since 1987, most of the area is within the administrative region Estrie, and the term Eastern Townships is now used in tourist literature. 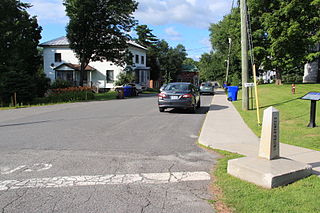 Stanstead is a town in the Memphrémagog Regional County Municipality in the Estrie region of Quebec, located on the Canada–United States border across from Derby Line, Vermont.

Magog is a city in southeastern Quebec, Canada, about 120 kilometres (75 mi) east of Montreal at the confluence of Lake Memphremagog—after which the city was named—with the Rivière aux Cerises and the Magog River. It is a major centre and industrial city in the Regional County Municipality of Memphremagog. The city lies in the Eastern Townships tourist region. 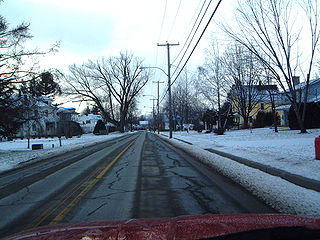 Potton is a township municipality of about 1,850 people in the Memphrémagog Regional County Municipality. It is located on the western shore of Lake Memphremagog in the Estrie region of Quebec, and is one of the municipalities in Brome County. Potton is located about 125 kilometres (78 mi) southeast of Montreal, 30 kilometres (19 mi) to the southwest of the city of Magog, and next to the United States border, north of North Troy, Vermont. 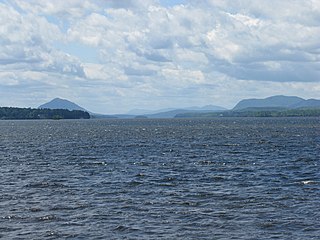 Lake Memphremagog is a fresh water glacial lake located between Newport, Vermont, United States and Magog, Quebec, Canada. The lake spans both Quebec and Vermont, but is mostly in Quebec. Most of the watershed that feeds the lake is located in Vermont, and is a source for accumulated phosphorus, sediments and other pollutants. Cleanup efforts since the late 1980s have improved the water quality. The lake furnishes potable (drinking) water for 200,000 people.

Ayer's Cliff is a village municipality in the Memphrémagog Regional County Municipality in the Estrie region of Quebec. It is located just north of the Canada–United States border, on Lake Massawippi, near the mouth of the Tomifobia River. 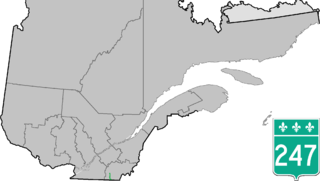 Lake Massawippi is a freshwater lake in Memphrémagog Regional County Municipality in the Estrie region of Quebec, Canada. The Tomifobia River is the source of the lake at its southern tip, near the village of Ayer's Cliff, Quebec. In early records, the lake was also called "Lake Tomifobi". The current of the lake flows north, funneling into the Massawippi River at the village of North Hatley, Quebec on Massawippi's northern shore. 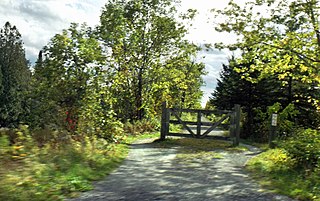 The Tomifobia Nature Trail is a 19 km rail trail in the Eastern Townships region of Quebec. It follows the old route of a Canadian Pacific railway from Ayer's Cliff to Stanstead. In between, it passes through parts of Stanstead-Est, Stanstead Township, and Ogden.

Beebe Plain is a divided village on the Quebec-Vermont border.

The Massawippi River is a river flowing in the territory of North Hatley and the city of Sherbrooke, in the administrative region of Estrie, in Quebec, Canada. It is a tributary of the Saint-François River which flows north to the south shoreof the Saint Lawrence River. 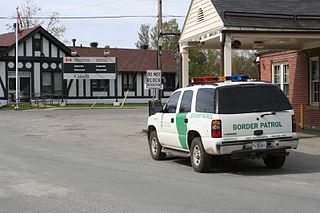 The Beebe Plain–Beebe Border Crossing is a border crossing station on the Canada–United States border. It connects Rue Principale in Beebe Plain, Québec with Beebe Road in Beebe Plain, a village in Derby, Vermont. Both the US and Canadian station buildings are historical properties listed by their respective governments.

The Derby Line–Stanstead Border Crossing is a border crossing station on the Canada–United States border, connecting the towns of Stanstead, Quebec and Derby Line, Vermont. It connects Main Street in Derby Line with Quebec Route 143 in Stanstead. It is one of two local crossings between the two towns, which historically had many more. This was a major crossing point until the construction of Interstate 91 (I-91) and the Derby Line–Rock Island Border Crossing in 1965. The historic 1930s United States station facilities were listed on the National Register of Historic Places in 2014. Both stations are open 24 hours per day.

The Massawippi Valley Railway was a short line railway established 1870 between Lennoxville, Quebec, and the Vermont border. Part of the Quebec Central Railway from 1926, the line was abandoned in 1990 and removed in 1992. Most of the former railway's path is now bicycle trails. 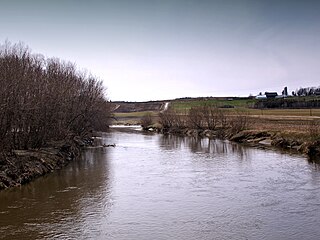 The Coaticook River is a north-flowing river rising in Vermont, United States, and located primarily in the Estrie region of Quebec, Canada. The mouth of the river is located north of Waterville and south of Lennoxville, near the southern border of the city of Sherbrooke, at the Massawippi River. Via the Massawippi and the Saint-François River, it is part of the St. Lawrence River watershed.

The Niger River is a tributary of the Tomifobia River. The Niger River flows successively in the municipalities of Coaticook, Barnston-Ouest, Stanstead-Est and Hatley, in the Memphrémagog Regional County Municipality (MRC), in the administrative region of Estrie, in Quebec, in Canada.