Tonga at the 2017 World Aquatics Championships

Tonga competed at the 2017 World Aquatics Championships in Budapest, Hungary from 14 July to 30 July.

Tonga has received a Universality invitation from FINA to send three swimmers (two men and one woman) to the World Championships. [1]

The Tonga national rugby league team is represents Tonga in rugby league football. They are currently the 4th ranked team in the world, and the highest ranked tier-two nation. The team was formed to compete in the 1986 Pacific Cup, and have competed at five Rugby League World Cups, starting in 1995 and continuing consecutively until the most recent tournament in 2017, where they achieved their best ever result as semi-finalists.

The OFC U-19 Women's Championship is a football tournament held every two years to decide the only qualification spot for the Oceania Football Confederation (OFC) representative at the FIFA U-20 Women's World Championship.

Tonga competed at the 2011 World Aquatics Championships in Shanghai, China between July 16 and 31, 2011. 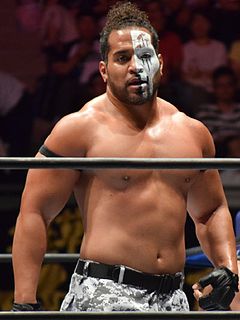 Tevita Tu'amoeloa Fetaiakimoeata Fifita is an American professional wrestler, currently working for New Japan Pro Wrestling (NJPW) under the ring name Tanga Loa. He is also known for his tenure in WWE under the name Camacho and for his time in Impact Wrestling under the name Micah. Fifita is part of a large wrestling family, as he is the brother of Tama Tonga and Hikuleo and the son of Haku. He and Tonga are five-time current IWGP Tag Team Champions and former three-time NEVER Openweight 6-Man Tag Team Champions with Bad Luck Fale and Taiji Ishimori.

Atieli Pakalani is a Tongan born rugby union player. He is nicknamed the 'Tongan Hitman', and his usual position is on the wing. Pakalani played Super Rugby for the NSW Waratahs in 2011. In 2017 Pakalani joined Leicester Tigers.

Alipate Aloisio Leone is a Tongan American professional wrestler better known by the ring name Tama Tonga. He is currently signed to Japanese professional wrestling promotion New Japan Pro-Wrestling (NJPW), where he is a founding member of Bullet Club. He is the nephew and adopted son of professional wrestler Haku/Meng and forms the tag team Guerrillas of Destiny with his cousin/adoptive brother Tanga Loa. He is currently one-half of the IWGP Tag Team Champions. He has also worked with NJPW's partner promotion in Mexico, Consejo Mundial de Lucha Libre (CMLL) where he has held the CMLL World Tag Team Championship twice.

Bullet Club, sometimes shortened to BC, is a professional wrestling stable primarily appearing in the Japanese promotion New Japan Pro-Wrestling (NJPW). In the United States, the group appears most notably in Ring of Honor (ROH).

Tonga competed at the 2013 World Aquatics Championships in Barcelona, Spain between 19 July and 4 August 2013.

Stevie Woltz is an American professional wrestler better known by the ring name "Hangman" Adam Page. He is currently signed to All Elite Wrestling (AEW). He is best known for his work in Ring of Honor (ROH) and New Japan Pro-Wrestling (NJPW), where he uses the ring name Hangman Page. He is a former ROH World Six-Man Tag Team Champion and currently in wrestling faction The Elite.

The Guerrillas of Destiny, sometimes shortened to G.O.D., is a Tongan-American professional wrestling tag team of real-life brothers Tama Tonga and Tanga Loa. The two originally began wrestling together in 2008 under the team name Sons of Tonga, a reference to their father, professional wrestler Tonga Fifita. After a seven-year break, the team reunited in March 2016, when Loa joined Tonga in New Japan Pro-Wrestling (NJPW). As members of the Bullet Club stable, they are the current and five-time IWGP Tag Team Champions and former three-time NEVER Openweight 6-Man Tag Team Champions with various Bullet Club teammates.

The Tonga women's national under-17 football team is the second highest women's youth team of women's football in Tonga and is controlled by the Tonga Football Association.

The 2018 OFC U-16 Championship was the 18th edition of the OFC U-16/U-17 Championship, the biennial international youth football championship organised by the Oceania Football Confederation (OFC) for the men's under-16/under-17 national teams of Oceania. The qualifying stage was held in Tonga between 14–20 July 2018, and the final tournament was held in the Solomon Islands between 9–22 September 2018.

Tonga participated at the 2018 Summer Youth Olympics in Buenos Aires, Argentina from 6 October to 18 October 2018.