Anthony Robert Dorigo (born 31 December 1965) is an Australian former professional footballer who played as a defender from 1983 to 2001.

Dorigo was born in Melbourne, Australia to an Italian father and an Australian mother; [2] [3] the family soon moved to Adelaide where Dorigo was raised. He played youth football for teams in the area as well as age-group football for South Australia, and in his mid-teens was training with Adelaide City's first team. Dorigo wrote to 14 top-flight clubs in England and asked for a trial. Aston Villa were the first club to respond and offered him a four-day trial which proved successful. [2]

He made his league debut for Aston Villa against Ipswich in 1984 as an 18-year-old and would go on to win the club's Player of the Year award during his time at Villa Park.

He signed for Chelsea from Aston Villa for £475,000 and he won the club's Player of the Year award in his first season, though they were also relegated. He helped the club win promotion back to the First Division at the first attempt. He left Chelsea in somewhat acrimonious circumstances in the summer of 1991, having made and then withdrawn a transfer request, and then seemingly fallen out with manager Bobby Campbell after being dropped from the side due to declining a new contract. He was sold to Leeds United for £1.3m. He made 180 appearances for Chelsea, scoring 11 goals.

Dorigo won the First Division with Leeds in his first season at the club as well as winning the Fans' Player of the Year award for the same year. He stayed with the club until 1997, when he joined Italian side Torino. At Torino he helped the side reach the promotion play-offs as well as being awarded the club's Player of the Year, although he missed a penalty in the play-off final.

Due to financial reasons Torino were forced let him go, with Dorigo closing his career with two years at Derby County. He scored three goals during his spell at Derby, with one in the league against Nottingham Forest [5] and two in the FA Cup against Huddersfield Town, one in the original tie [6] and again in the replay. [7] He spent a final season at Stoke City, where he was made club captain, before retiring in 2001 at the age of 35. In his final season he was playing in Division Two (the third tier of the English senior leagues).

Dorigo was initially called up by Australia for the 1986 World Cup qualifying campaign. However Aston Villa manager Tony Barton refused Dorigo permission to travel. [2] Barton felt that playing for Australia would be a waste of time for Dorigo as their opponents were generally weaker opposition from Oceania. [2]

The Football Association approached Dorigo to represent England: "England came along and asked me to play for them if I hung around for another year and got my British citizenship," says Dorigo. "My father was Italian and my mother was Australian, so I have no English parentage at all. What I say to my English friends today is that 'you lot were so bad you needed an Aussie to come and play for you!' It was very different back then to what it is now – the players in the Premier League today fly all over the world to play for their countries. They just did not allow that to happen in my day." [2]

Dorigo later made 7 appearances for the England B team and 11 for the England under-21s before going to earn 15 England caps. He made his debut in 1989 against Yugoslavia. A year earlier he was a surprise inclusion in the squad for the European Championships as cover for Kenny Sansom, after regular deputy Stuart Pearce withdrew through injury. Dorigo was also part of the 1990 World Cup squad. He played in the third place play-off defeat to hosts Italy, providing the cross for David Platt to score the temporary equaliser; England eventually lost the match 2–1, however. [8]

Since retiring he has been a football pundit with various TV and Radio networks starting with ITV Digital covering the Championship in 2001–02. He has since worked with Radio Aire covering Leeds United's Premier League campaign as well as TV punditry for Eurosport, Bravo, Channel 5, ESPN and Sky amongst others. He appeared on the James Corden Show on 16 June prior to the England and Germany second round match of the World Cup 2010.

His regular TV work includes La Liga, Serie A and Internationals for Al Jazeera as well as commentating for ESPN. He also commentates for Absolute Radio as part of their live Barclays Premier League coverage as well as appearing a number of times on BBC Radio 5 Live show Fighting Talk.

Andrew David Townsend is a former footballer and current co-commentator for Premier League Productions and CBS Sports who played in two World Cups for the Republic of Ireland.

Ian Kenneth Taylor is an English former footballer, best known for his time at Aston Villa. A midfielder, he had a fifteen-year career in the Football League and Premier League, scoring 103 goals in 577 league and cup competitions.

Anthony Hateley was an English footballer who played as a centre forward. He played for several clubs in The Football League, including Notts County, Aston Villa, Chelsea and Liverpool. He was the father of former England footballer Mark Hateley and grandfather of footballer Tom Hateley.

Paul Andrew Kerr is an English former footballer who played as a midfielder. He scored 48 goals in 264 league appearances in a 13-year career in the Football League. 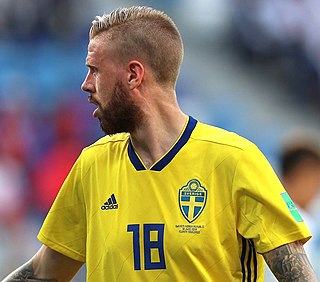 Pontus Sven Gustav Jansson is a Swedish professional footballer who plays as a centre back for Championship club Brentford and the Sweden national team. He won his first international cap in 2012 and represented Sweden at Euro 2016 and the 2018 FIFA World Cup.