Tony Stone (born 1982) is an American music producer and project developer for Christian hip hop artists. He has produced the music to hundreds of songs in the genre. He is currently the Project Manager for Reflection Music Group.

Christian hip hop is a subgenre of hip hop music characterized by a Christian worldview, with the general purposes of evangelization, edifying some members of the church and/or simply entertaining. Christian hip hop music emerged from urban communities in the United States in the 1980s, when it existed almost exclusively in small underground scenes, with minimal formal industry promotion and little mainstream attention. It emphasizes the use of positive and uplifting messages to promote faith and belief.

Production contributed to these albums 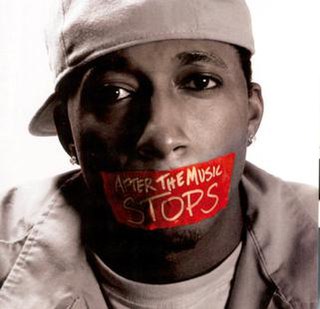 Lecrae Devaughn Moore, mononymously known as Lecrae, is an American Christian hip hop recording artist, songwriter, record producer, and actor. He is the president, co-owner and co-founder of the independent record label Reach Records, and the co-founder and president of the now-defunct non-profit organization ReachLife Ministries. To date, he has released nine studio albums and three mixtapes as a solo artist, and has released three studio albums, a remix album, one EP, and numerous singles as the leader of the hip hop group 116 Clique. He produced much of his earlier material along with other early Reach Records releases. Lecrae, in reference to his label as a Christian rapper, has stated that his music is just hip hop, though it reflects his Christian faith. In May 2016, Lecrae signed to Columbia Records in a joint deal between his label and Columbia.

Rehab: The Overdose is the fifth studio album by Christian hip hop artist Lecrae. It was released on January 11, 2011 on Reach Records. The album is intended to be a direct follow up to Rehab, as Rehab is conceptually about the defeat of addiction while Rehab: The Overdose is about finding "grace, love, peace and hope" in Jesus. Some fans even consider it to be a part of Rehab.

William "Duce" Branch a.k.a. The Ambassador or Ambassador is a Christian hip-hop artist who has recorded both independently and as a founding member of the group The Cross Movement. Branch is the former president of Cross Movement Ministries. He is an alumnus of Dallas Theological Seminary and has a Master in Theology degree graduating with honors.

So Hot Productions is a music production company located in St. Louis, Mo., currently consisting of artist/producer J.R. but employed former producer/recording engineer NAB. It is rumoured that a third producer is also joining the crew. Their style is versatile, ranging from chopped and screwed dirty south beats to symphonic slow jams, but most of their music has a distinct midwest feel. 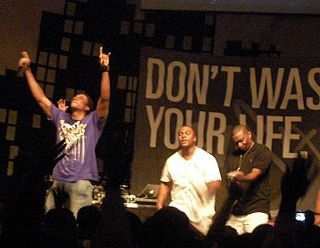 The 116 Clique is an American Southern Christian hip hop collective from Dallas, Texas signed to Reach Records. It consists primarily of Reach Records artists, but also contains artists from other labels. The 116 Clique is named after the Bible verse Romans 1:16: "For I am not ashamed of the gospel: for it is the power of God unto salvation to every one that believes; to the Jew first, and also to the Gentile." For them it means acknowledging the power of the Gospel and the divine calling to proclaim it in every area of their life. "We can lay our lives down to serve and glorify God in everything we do."

Courtney Orlando Peebles, a.k.a. "J.R.", is a Christian singer and producer formerly signed to Cross Movement Records. J.R. is also half of the So Hot Productions team along with N.A.B. His debut album was Metamorphosis, released in 2005. He often appears on the hooks of songs by fellow labelmates, such as FLAME and Da' T.R.U.T.H.. He was expected to release his second album, Life By Stereo, in September 2007; however, it was pushed back to December. In 2009, J.R. left Cross Movement Records and went indie to work on a new sound.

Brady Goodwin Jr. better known by his stage name, Phanatik is an American East Coast rapper and author who has recorded both independently and as a founding member of the two time Grammy-nominated Christian rap group The Cross Movement. His debut album entitled The Incredible Walk, was released on February 22, 2005. Phanatik has since released three other solo albums. Phanatik is known for his creative concepts, wordplay or "witty word wizardry" and story telling. His "on beat - off beat" style has been described as a "Thinking man's flow."

Kingdom People is the first solo album of Christian hip hop artist Tedashii, released through Reach Records in 2006. The album features most of its production from Reach Records founder Lecrae Moore. It also features artists from the label. The hidden track at the end of the album is the chopped and screwed version of the song "impressed", found on the 116 Clique compilation album. 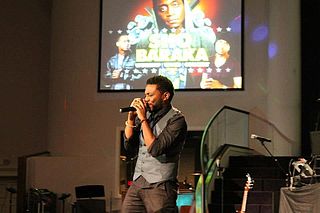 Amisho Baraka Lewis, better known by his stage name Sho Baraka, is an American Christian hip-hop artist and writer who has recorded both independently and as a founding member of the 116 Clique. He was originally signed to Reach Records until leaving in March 2011. He then co-founded a record label and group known as "High Society" with fellow Christian rappers JR, Swoope, and Suzy Rock. His debut album Turn My Life Up was released in November 2007. His second album Lions and Liars, was released March 2010. His third album Talented Xth was released in January 2013. His fourth album, The Narrative, was released in October 2016. 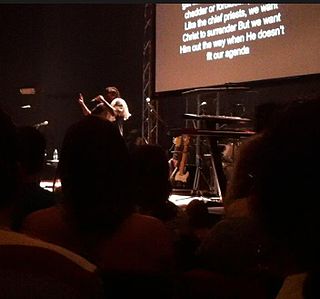 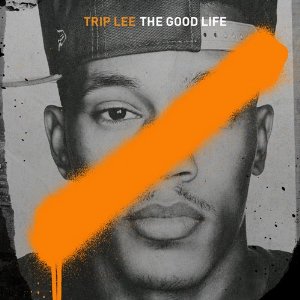 The Good Life is the fourth studio album from Christian rap artist Trip Lee. The album was released in 2012, through Reach Records. The album includes features from Lecrae, Andy Mineo, KB, and Jimmy Needham, among others. Four singles were released for the album, "One Sixteen ", "I'm Good ", "Fallin' ", and "Robot". Three promotional music videos were released for the album for three of the four singles, "I'm Good", "Fallin", and "One Sixteen". It was released to critical acclaim, with critics praising Trip's flow, pop-style hooks, high-quality beats, moody electronics, and lyricism.

Church Clothes is the first mixtape by Christian hip hop artist Lecrae, released for free on May 10, 2012, and hosted by DJ Don Cannon. It featured No Malice of Clipse on the song "Darkest Hour", and included production work by 9th Wonder, Boi-1da, S1 and Street Symphony. Label-mates Tedashii and Andy Mineo, as well as other fellow Christian hip-hop artists such as Dre Murray, Thi'sl, Swoope, Christon Gray, and Braille, also made appearances on the album. The mixtape was downloaded 100,000 times in 48 hours, and met with critical acclaim. It received controversy in Christian media upon its release due to its condemnation of hypocrisy in the Christian Church and Lecrae's collaboration with the mainstream producer Don Cannon. A shorter, remastered EP version was released on iTunes on June 25, 2012. The EP debuted at #10 on the Billboard Christian Albums and Gospel Albums charts. Kevin Elijah Burgess, better known by his stage name KB, is an American Christian hip hop artist and music executive from St. Petersburg, Florida. He is the leader of the hip-hop group HGA, and was signed as a solo artist to Reach Records in 2010. He is also a member of the Reach Records-based hip-hop collective 116 Clique. After releasing a mixtape in 2011 entitled Who Is KB?, his debut album, Weight & Glory, was released on July 17, 2012, to critical acclaim. On March 4, 2014 he released his first EP, 100. On April 21, 2015, he released his second album, Tomorrow We Live. October 20, 2017 was the release of his third album, Today We Rebel. 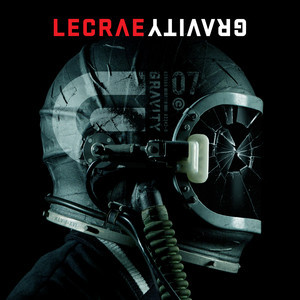 Gravity is the sixth studio album by American Christian hip hop artist Lecrae, released on September 4, 2012. The album features appearances from Big K.R.I.T., Mathai, Ashthon Jones, and Mali Music, along with labelmates Trip Lee, Andy Mineo, Derek Minor, who was formerly known as PRo, and Tedashii. Producers on the album include DJ Khalil, Street Symphony's Heat Academy, and The Watchmen. The first single off the album, "I Know", was released on July 24, 2012, and was followed by "Tell the World" featuring Mali Music on August 15, 2012, and "Mayday" featuring Big K.R.I.T. and Ashthon Jones on August 30, 2012. Reach Records released five music videos for the album: "Lord Have Mercy", featuring Tedashii along with No Malice of Clipse, on August 1, 2012, "Tell the World", featuring Mali Music, on October 19, 2012, "Mayday", featuring Big K.R.I.T. and Ashthon Jones, on December 13, 2012, "Fakin'", featuring Thi'sl, on February 1, 2013, and "Confe$$ions", featuring David Banner, on April 30, 2013. 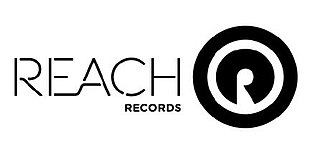 Reach Records is an American record label specializing in Christian hip hop. The label was founded in 2004 by Ben Washer and hip-hop artist Lecrae. In addition to Lecrae, the Reach Records roster contains artists Andy Mineo, KB, Tedashii, Gawvi, Trip Lee, 1k Phew, Whatuprg and Wande as well as the hip-hop collective 116 Clique, whose ranks consist primarily of the label's solo acts. Reach Records is an imprint of the Columbia Records, a division of Sony Music Entertainment. 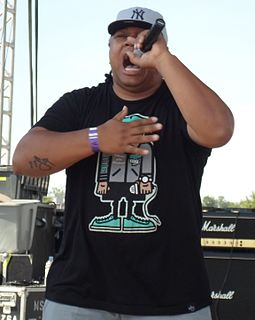 Mental marks the ninth album from KJ-52. The Paradigm Collective released the project on October 21, 2014. He produced the album with Solomon Olds. Mental is KJ-52's ninth album and the follow-up to 2012's Dangerous.

Lasanna “ACE” Harris is a record producer based in Atlanta, GA. His production has topped the Billboard charts and has also been featured on ESPN, VH1, and MTV. He has produced for Nicki Minaj, T.I., Kid Ink, and Lecrae; the latter for which he received a Dove Award. Ace Harris grew up listening to hip hop innovators like Timbaland and OutKast as well as soaking up the sounds of afrobeat, highlife, and soca. From working alongside top producer Shama “Sak Pase” Joseph as well as spearheading his own projects like ATLiberia.