Last updated January 02, 2021
Not to be confused with Tobermorite or Torbanite.

Torbernite, whose name derives from the Swedish chemist Torbern Bergman (1735–1784), is a radioactive, hydrated green copper uranyl phosphate mineral, found in granites and other uranium-bearing deposits as a secondary mineral. Torbernite is isostructural with the related uranium mineral, autunite.

The chemical formula of torbernite is similar to that of autunite in which a Cu2+ cation replaces a Ca2+. The number of water hydration molecules can vary between 12 and 8, giving rise to the variety of metatorbernite when torbernite spontaneously dehydrates. Their respective chemical compositions are the following:

As a radioactive mineral, torbernite has some limited significance as a uranium ore. Its vibrant green color and well-developed distinctive crystals (size: mm to a few cm) make it a sought-after collector's mineral, as well. However, torbernite, like other hydrated minerals, can easily suffer from loss of water molecules. This loss of water from the mineral leads to an alteration of torbernite specimens into its pseudomorph, meta-torbernite. Some collector's websites assert that any torbernite specimen more than a few years old should be considered fully transitioned to meta-torbernite. However, it likely depends on the temperature and relative humidity of ambient air in which specimens are stored.

As torbernite is radioactive and outgases radon (222Rn), collectors are urged to take proper precautions in the handling and storage of any specimens. [3] An adequate ventilation of the rooms and the cabinets in which the specimens are stored is essential to evacuate the radioactive radon gas responsible for lung cancer, but it could increase the dehydration rate of the specimens. To limit radon inhalation, naked specimens should never be stored in rooms in which one spends much living or working time. An alternative is to store specimens in gas tight transparent containers in which radon will accumulate and decay to secular equilibrium. In addition, collectors should ideally measure a sample with a Geiger counter before purchase, and use this to help inform their purchase, as some samples can reach over 100 becquerels.

Torbernite frequently occurs in conjunction with other uranium minerals, as well as host rock minerals. These associated minerals include:

The most obvious factor in identifying torbernite is its radioactivity. However, since it is frequently found in association with other radioactive minerals, this may not be useful in separating one uranium mineral from the rest. A next step would be to check color. Most uranium-bearing minerals are bright yellow or green. As torbernite is exclusively green, this can be a useful secondary fact. Crystal habit is also useful, but as it shares a similar structure and color with autunite. Nonetheless, regardless of identification, it is likely that at least some of the specimen will have already altered to meta-torbernite. 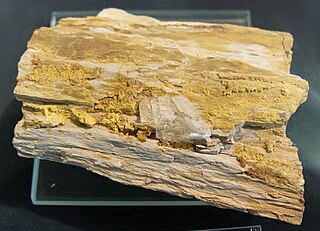 Carnotite is a potassium uranium vanadate radioactive mineral with chemical formula K2(UO2)2(VO4)2·3H2O. The water content can vary and small amounts of calcium, barium, magnesium, iron, and sodium are often present. 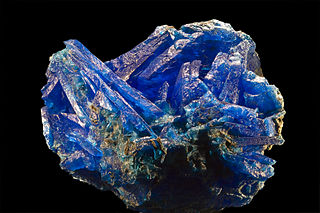 Chalcanthite, whose name derives from the Greek, chalkos and anthos, meaning copper flower, is a richly colored blue/green water-soluble sulfate mineral CuSO4·5H2O. It is commonly found in the late-stage oxidation zones of copper deposits. Due to its ready solubility, chalcanthite is more common in arid regions.

Autunite (hydrated calcium uranyl phosphate), with formula Ca(UO2)2(PO4)2·10–12H2O, is a yellow-greenish fluorescent phosphate mineral with a hardness of 2–​2 1⁄2. Autunite crystallizes in the orthorhombic system and often occurs as tabular square crystals, commonly in small crusts or in fan-like masses. Due to the moderate uranium content of 48.27% it is radioactive and also used as uranium ore. Autunite fluoresces bright green to lime green under UV light. The mineral is also called calco-uranite, but this name is rarely used and effectively outdated.

Uranophane (Ca(UO2)2(SiO3OH)2·5H2O), also known as uranotile, is a rare calcium uranium silicate hydrate mineral that forms from the oxidation of other uranium-bearing minerals. It has a yellow color and is radioactive.

Tyuyamunite (pronounced tuh-YOO-ya-moon-ite) is a very rare uranium mineral with formula Ca(UO2)2V2O8·(5-8)H2O. It is a member of the carnotite group. It is a bright, canary-yellow color because of its high uranium content. Also, because of tyuyamunite's high uranium content, it is radioactive. It was named by Konstantin Avtonomovich Nenadkevich, in 1912, after its type locality, Tyuya-Muyun, Fergana Valley, Kyrgyzstan.

Abernathyite is a mineral with formula K(UO2)(AsO4)·3H2O. The mineral is named after Jesse Evrett Abernathy (1913–1963) who first noted it in 1953 in the U.S. State of Utah. It was described as a new mineral species in 1956. Abernathyite is yellow and occurs as small crystals.

Metatorbernite is a radioactive phosphate mineral, and is a dehydration pseudomorph of torbernite. Chemically, it is a copper uranyl phosphate and usually occurs in the form of green platy deposits. It can form by direct deposition from a supersaturated solution, which produces true crystalline metatorbernite, with a dark green colour, translucent diaphaneity, and vitreous lustre. However, more commonly, it is formed by the dehydration of torbernite, which causes internal stress and breakage within the crystal lattice, resulting in crystals composed of microscopic powder held together using electrostatic force, and having a lighter green colour, opaque diaphaneity, and a relatively dull lustre. As with torbernite, it is named after the Swedish chemist Tornbern Bergmann. It is especially closely associated with torbernite, but is also found amongside autunite, meta-autunite and uraninite.

Andersonite, Na2Ca(UO2)(CO3)3·6H2O, or hydrated sodium calcium uranyl carbonate is a rare uranium carbonate mineral that was first described in 1948. Named after Charles Alfred Anderson (1902–1990) of the United States Geological Survey, who first described the mineral species, it is found in sandstone-hosted uranium deposits. It has a high vitreous to pearly luster and is fluorescent. Andersonite specimens will usually glow a bright lemon yellow (or green with blue hints depending on the deposit) in ultraviolet light. It is commonly found as translucent small rhombohedral crystals that have angles close to 90 degrees although its crystal system is nominally trigonal. Its Mohs hardness is 2.5, with an average specific gravity of 2.8.

Ulrichite is a rare green uranium phosphate mineral (CaCu(UO2)[PO4]2·4H2O). It crystallizes as monoclinic prisms which occur as apple green acicular radiating clusters. It is radioactive and exhibits strong yellow fluorescence under ultraviolet radiation.

Zeunerite is a green copper uranium arsenate mineral with formula Cu(UO2)2(AsO4)2•(10-16)H2O. It is a member of the autunite group. The associated mineral metazeunerite is a dehydration product of zeunerite.

Coconinoite is a uranium ore that was discovered in Coconino County, Arizona. It is a phosphate mineral; or uranyl phosphate mineral along with other subclass uranium U6+ minerals like blatonite, boltwoodite, metazeunerite and rutherfordine.

Bergenite is a rare uranyl phosphate of the more specific phosphuranylite group. The phosphuranylite-type sheet in bergenite is a new isomer of the group, with the uranyl phosphate tetrahedra varying in an up-up-down, same-same-opposite (uuduudSSOSSO) orientation. All bergenite samples have been found in old mine dump sites. Uranyl minerals are a large constituent of uranium deposits.

Johannite is a rare uranium sulfate mineral. It crystallizes in the triclinic crystal system with the chemical composition Cu[UO2(OH)SO4]2·8H2O. It crystallizes in the triclinic system and develops only small prism or thin to thick tabular crystals, usually occurs as flaky or spheroidal aggregates and efflorescent coatings. Its color is emerald-green to apple-green and its streak is pale green. 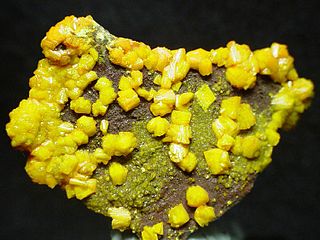 Francevillite is a uranyl-group vanadate mineral in the tyuyamunite series. Its chemical formula is (Ba,Pb)(UO
2)
2V
2O
8·5(H
2O). Francevillite is a strongly radioactive mineral. It is typically orange, yellow or brownish yellow. It forms a series with curienite.

Metazeunerite is an arsenate mineral with a chemical formula of Cu(UO2)2(AsO4)2·8H2O. The origin of this mineral is almost always from the natural dehydration process of zeunerite.

Znucalite or CaZn11(UO2)(CO3)3(OH)20·4(H2O) is a rare, radioactive, white to pale cream colored uranium-containing carbonate mineral, hydrated calcium zinc uranyl carbonate hydroxide. Znucalite crystallizes in the orthorhombic system, often forming aggregates or crusts, and is found as a rare secondary species in carbonate-hosted (meaning it is mined from carbonate containing formations such as limestone) polymetallic veins, and nearby oxidizing uranium veins; on dump material and coating mine walls, apparently of post-mine origin. It fluoresces yellow-green under UV light.