Last updated June 08, 2022
Supplier of aerospace components
This article is about the aerospace manufacturing company. For other uses, see Triumph.

Triumph Group was formerly one of the companies in Alco Standard Corporation, a loose conglomerate of diversified companies that operated across a large number of unrelated fields, including office supplies. [10] By the latter half of the decade, officers of Alco Standard Corporation were concentrating on office supplies, paper products and food services, their three core competencies. The former was the fastest growing market for the company.

In 1986, Alco was considering selling Triumph Group and its distribution businesses, the former of which competed in the aerospace industry and earned just under 3% of Alco Standard's revenue.

In addition to its aerospace factions, Triumph also had a stake in the U.S. steel industry. Because customers were becoming more demanding with respect to product quality, Alco Standard formed a new organization named Alco Diversified Services out of the 11 companies that comprised the Triumph Group, the two paper companies and their aerospace subsidiary. Richard Ill, who led Triumph Group for several years, was promoted to president of Alco Diversified Services.

In 1991, Alco sold their food division. In 1992, the corporation made an announcement that it was trying to sell Alco Diversified Services and purchase 49.9% percent of IMM Office Systems Holding. In 1993, Triumph Group took over Alco Diversified Services in a leveraged buyout. Triumph conducted aviation repair and overhaul, industrial machining, paper converting and steel converting. The companies employed 1450 people at 22 US locations, with aviation accounting for just over 25% of total sales.

In 1995, due to Department of Defense cutbacks, Triumph sold Otto Konigslow Manufacturing Company (which manufactured aerospace components) to two of its supervisors.

In the middle of the 1990s, commercial aviation sales went from $200 million to $300 million in three years, with forecasts indicating that sales would reach $500 million before the end of the decade. The aviation businesses provided 67% of the company's revenue. With never-before-seen demand for airline travel around 1996, Boeing produced close to 500 aircraft per annum. To meet this unprecedented production rate, Boeing outsourced a greater number of components and services.

In 1996, the corporation had 1500 workers and yearly earnings of $300 million. Six divisions worked in aviation while the other seven worked in specialty materials. The company went public at that time, which provided over $50 million in revenue.

In 1998, when Ill subsequently announced his preoccupations about cutbacks in aircraft production at Boeing Company, he also stated that there may be more work forthcoming on the new Boeing 737. This was an excellent fit for Triumph Air Repair, as much of their work consisted of servicing the Boeing 727 and 737 aircraft. It was at this time that Boeing Company purchased McDonnell Douglas, the first company to manufacture the KC-10 aircraft, which was the aerial refueling version of the Boeing DC-10. Soon to follow would be Triumph Air Repair's largest contract ever, a twelve-month deal to service auxiliary power units and line replaceable units for the United States Air Force KC-10 tankers. Boeing had several options to renew, increasing the potential of this arrangement ninefold.

In 1998, Triumph acquired four additional companies, bringing its grand total of subsidiaries to eighteen and its employee count to over two thousand in early 1999. It was at this time that Triumph purchased Ralee Engineering, a manufacturer of gigantic aircraft components and assemblies. This gave the conglomerate the ability to produce almost all of the parts used in commercial aircraft.

In 1999, Triumph infused six more companies into its lineup of subsidiaries. The company produced flight control surfaces, control systems, and metal parts while providing MRO for almost every aircraft system except cabins, communications devices, landing gear, engines and the most comprehensive maintenance checks. [11]

In 2003, the Boeing Company's failing Spokane, Washington facility was acquired, which is now known as Triumph Composite Systems. The conglomerate now stood at 41 companies. [12] In the same quarter of that year, the company restructured by discontinuing its Metals Group and combining its five aviation segments into three. The Control Systems and Structures Groups were combined into Triumph Aerospace Systems Group. The Gas Turbine Services and Operational Components Groups were unified, becoming Triumph Components Group. Triumph Aftermarket Services Group added Advanced Materials Technologies and Aerospace Technologies to its portfolio. [13]

Shortly thereafter, Triumph acquired the Parker Hannifin Corporation United Aircraft Products Division and Rolls-Royce Gear Systems. The company then reorganized into two groups, Triumph Aftermarket Services and Triumph Aerospace Systems. It also combined several of its Arizona subsidiaries into Triumph Engineered Solutions, which was decommissioned at the end of 2004. [14]

In June 2010, Triumph Group acquired Vought Aircraft Industries, a leading producer of aerostructures from the Carlyle Group. This acquisition close to doubled the company workforce, and created a 'Tier One Capable' supplier. [16] [17]

In January 2014 [18] the company sold its division Lee Aerospace back to its original founder, Jim Lee. Triumph had owned Lee Aerospace for 14 years. [19]

In December 2015, Triumph Group Inc. announced that Daniel J. Crowley would be named president and chief executive officer effective 4 January 2016. Crowley succeeds Richard C. Ill, CEO from 1993 to 2012. Ill left retirement to step in after Jeffry D. Frisby resigned. [20] Ill was also the chairman since 2009, so when he took over the CEO position after Frisby left, he was succeeded by one of the company's board members, U.S. Air Force (Ret.) Gen. Ralph E. Eberhart. [21]

Triumph refers to divisions of the corporation as Business Units. [22]

The company has three business units:

Triumph Processing in Lynwood, California specializes in the manufacture of titanium and aluminum parts such as wing skins, fuselage skins, spars, stringers, spar webs, longerons and formed components such as engine cowlings in addition to detailed machined parts for the commercial, military and aerospace industries. Triumph Processing is capable of manufacturing parts up to 110 feet (33.5 meters) in length and 14 feet (4.3 meters) deep. [33] [34]

Triumph Northwest in Albany, Oregon specializes in the handling of rare metals and the production of high quality refractory metal parts. As an AS9100 compliant facility, the facility typically forges and machines tungsten, molybdenum, rhenium, tantalum and niobium components for the aerospace, defense, solar, medical and semiconductor industries. In addition, secondary machining of titanium castings for the aerospace industry is another function the organization performs. On the premises two Bliss 800-ton mechanical forging presses, a Charmilles wire EDM and various CNC lathes and machining centers are utilized to produce these final products. [66]

Triumph Thermal Systems (TTS) with locations in Forest, Ohio and Shelbyville, Indiana is a global manufacturer and supplier of heat exchange and transfer systems and temperature control components in lubrication, fuel, environmental, hydraulic and related systems. Products that TTS produces include:

Triumph Interiors specializes in the refurbishment and repair of aircraft interiors and the manufacture of related components such as sidewalls, windows and overhead bins. The company is headquartered in Oakdale, Pennsylvania, and operates additional facilities in Grand Prairie, Texas and Atlanta, Georgia. [79] [80] [81]

Bombardier Aviation is a division of Bombardier Inc. It is headquartered in Dorval, Quebec, Canada. Its most popular aircraft included the Dash 8 Series 400, CRJ100/200/440, and CRJ700/900/1000 lines of regional airliners, and the newer CSeries. It also manufactured the Bombardier 415 amphibious water-bomber, and currently makes the Global Express and the Challenger lines of business jets.

Embraer S.A. is a Brazilian multinational aerospace manufacturer that produces commercial, military, executive and agricultural aircraft, and provides aeronautical services. It was founded in 1969 in São José dos Campos, São Paulo, where its headquarters are located. The company is the third largest producer of civil aircraft, after Boeing and Airbus.

Safran S.A. is a French multinational aircraft engine, rocket engine, aerospace-component and defense corporation. It was formed by a merger between the aircraft and rocket engine manufacturer and aerospace component manufacturer group SNECMA and the security company SAGEM in 2005. In 2018 Safran took control of Zodiac Aerospace, significantly expanding its aircraft equipment activities. Its headquarters is located in Paris. Employing over 95,000 people and generating 24.64 billion euros in sales in 2019, Safran operates in the aircraft propulsion and equipment, space and defense markets. The company is listed on the Euronext stock exchange and is part of the CAC 40 and Euro Stoxx 50 indices.

Moog is an American-based designer and manufacturer of electric, electro-hydraulic and hydraulic motion, controls and systems for applications in aerospace, defense, industrial and medical devices. The company operates under four segments: aircraft controls, space and defense controls, industrial controls, and components. Moog is headquartered in Elma, New York and has sales, engineering, and manufacturing facilities in twenty-six countries.

Zodiac Aerospace was a French aerospace group founded in 1896 that supplied systems and equipment for aircraft. It had around 100 sites across the globe and employed nearly 35,000 people. In October 2018 it was acquired by French aerospace and defense company Safran.

Collins Aerospace, a Raytheon Technologies subsidiary, is one of the world's largest suppliers of aerospace and defense products, headquartered in Charlotte, North Carolina, United States.

Hellenic Aerospace Industry (HAI) is the leading aerospace company of Greece. The company headquarters is located in Tanagra, 65 kilometers north-west of Athens, with the industrial complex covering an area of 200,000 sq.m.

Magellan Aerospace Corporation is a Canadian manufacturer of aerospace systems and components. Magellan also repairs and overhauls, tests, and provides aftermarket support services for engines, and engine structural components. The company's business units are divided into the product areas of aeroengines, aerostructures, rockets and space, and specialty products. Its corporate offices in Mississauga, Ontario, Magellan operates in facilities throughout Canada, the United States, and the United Kingdom.

Héroux-Devtek Inc. is an international company specializing in the design, development, manufacture, repair and overhaul of landing gear, actuation systems and components for the aerospace market. Founded in 1942, the company's head office is located in Longueuil, Quebec. Héroux-Devtek Inc. has more than 1960 employees working in 18 facilities in North America and Europe. The corporation is the third-largest landing gear company worldwide, supplying both the commercial and defence sectors of the Aerospace market with new landing gear systems and components, as well as aftermarket products and services. It also manufactures actuation systems as well as ball screws. Héroux-Devtek's accomplishments include the manufacturing of the landing gear for the lunar module that landed Neil Armstrong on the moon for the Apollo 11 mission in 1969.

ST Engineering Aerospace, doing business as ST Aerospace, is an aviation-orientated subsidiary of ST Engineering. Headquartered in Singapore, it has international offices and facilities located at aviation hubs in Asia Pacific, Europe and the United States.

Daher, or DAHER, is a French industrial conglomerate. It is operational across the aerospace, defence, nuclear, and automotive industrial sectors in the fields of manufacturing, services, and transport.

Dowty Group was a leading British manufacturer of aircraft equipment. It was listed on the London Stock Exchange and was once a constituent of the FTSE 100 Index. The firm ceased operating as an individual entity following its acquisition by TI Group in 1992. 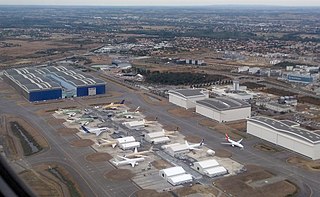 Airbus SE is a European multinational aerospace corporation. Airbus designs, manufactures and sells civil and military aerospace products worldwide and manufactures aircraft in Europe and various countries outside Europe. The company has three divisions: Commercial Aircraft , Defence and Space, and Helicopters, the third being the largest in its industry in terms of revenues and turbine helicopter deliveries. As of 2019, Airbus is the world's largest airliner manufacturer.

Mahindra Aerospace is an Indian aerospace company, part of the Mahindra Group. It is the first Indian private firm to make smaller civil aircraft for the Indian general aviation market. It is an AS9100 Rev.D certified design organization.

Liebherr-Aerospace & Transportation is the division for aerospace and transportation systems. It is a 100% subsidiary of the Liebherr Group of Companies.

Redwire Corporation is an American aerospace manufacturer and space infrastructure technology company headquartered in Jacksonville, Florida. The company was formed on June 1, 2020 by the private equity firm AE Industrial Partners.