The company was founded as the retail store Free People by Richard Hayne, Judy Wicks, and Scott Belair in 1970 as a project for an entrepreneurship class at University of Pennsylvania. [6] It was renamed to Urban Outfitters and incorporated in 1976. [6]

Urban Outfitters is a lifestyle related retailer which specializes in selling apparel, clothing accessories and apartment products. [7] It primarily targets teens and young adults who are interested in hipster subculture and alternative fashion. [8]

In 2011, it agreed to sell limited editions of Polaroid ONE600 instant cameras and Type 779 instant film in partnership with the Austrian entrepreneur Florian Kaps, who acquired the rights to manufacture 700 copies of the defunct product. [10] In January 2013, it hired the Abraham & Roetzel lobbying firm, led by former Republican Sen. Spencer Abraham, to advocate on its behalf in Washington, D.C., regarding retail industry policy. [11]

In Q4 2015, the company announced plans to acquire the Vetri Family, a Philadelphia restaurant group. As the company is facing declining same store sales and foot traffic, the acquisition illustrates the retailer's shift in strategy. This includes restaurants Amis Trattoria, Bar Amis, and Pizzeria Vetri. There are two Pizzeria Vetri locations in Philadelphia, with other locations in King of Prussia, Pennsylvania and Washington DC. [12]

Urban Outfitters' products have also been the subject of multiple complaints and criticism, largely from religious, ethical, and ethnic pressure groups including a local chapter of the NAACP, [14] [15] Anti-Defamation League [16] and Navajo Nation for some of their products.

On November 27, 2009, URBN drew the attention of the Swedish press for denying collective bargaining rights to employees at their Stockholm store by making all 38 workers redundant and re-hiring them through employment agency Academic Work. [17] [18] In response to the move, ombudsman Jimmy Ekman called for tougher laws to prevent other firms denying collective bargaining rights in this way. [19]

Urban Outfitters does not publicly disclose which factories produce the brand's clothing. [20] 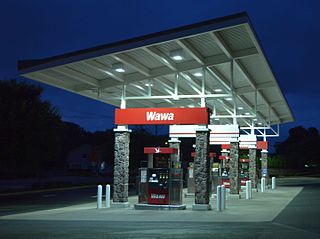 American Eagle Outfitters, Inc., also known as American Eagle, is an American lifestyle, clothing, and accessories retailer headquartered at SouthSide Works in Pittsburgh, Pennsylvania. It was founded in 1977 by brothers Jerry and Mark Silverman as a subsidiary of Retail Ventures, Inc., a company that also owned and operated Silverman's Menswear. The Silvermans sold their ownership interests in 1991 to Jacob Price of Knoxville, Tennessee. American Eagle Outfitters is also the parent company of Aerie. 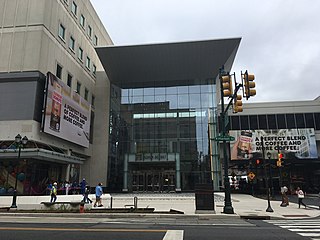 Fashion District Philadelphia is a shopping mall in Philadelphia, Pennsylvania, United States, located in Center City along Market Street. It opened in 2019 on the site of a previous mall known as the Gallery at Market East. The area was originally planned to be an outlet mall to be called "Fashion Outlets of Philadelphia", but the plans were later changed to be a new "retail district" consisting of clothing stores and a movie theater. The new mall opened on September 19, 2019. Planners envisioned that Philadelphia, as the sixth largest city, did not have a major retail center when even compared with Kansas City, the 37th largest city. The mall was envisioned to fill that "void" that even smaller cities have, to sell items to the Center City market that had previously only been available elsewhere. Many of the new retailers planning to open have never had a presence in Center City before. The Fashion District Philadelphia currently has Burlington, AMC Theatres, and Round One Entertainment as anchors.

Free People is an American bohemian apparel and lifestyle retail company that sells women’s clothing, accessories, shoes, intimates, and swimwear. It also has a beauty and wellness category, which includes products such as cosmetics, skin, and oral care, oral supplements, crystals, and books.

VF Corporation is an American worldwide apparel and footwear company founded in 1899 and headquartered in Denver, Colorado. The company's more than 30 brands are organized into three categories: Outdoor, Active and Work. The company controls 55% of the U.S. backpack market with the JanSport, Eastpak, Timberland, and North Face brands.

Richard Hayne is the president and CEO of Urban Outfitters, an American chain of clothing retailers. Hayne has served as chairman and president since 1976. In 2012, he became CEO following the retirement of Glen Senk. According to the Forbes, Hayne dropped off the Forbes 400 list in 2015. As of March 2019, Hayne ranked #1818 on Forbe's Billionaires 2019 list. 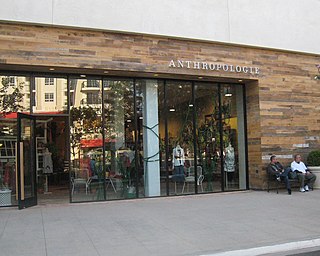 Anthropologie is an American clothing retailer with approximately 200 stores across the U.S. and Canada which offer an assortment of clothing, jewelry, home furniture, decoration, beauty, and gifts.

Justice was a clothing and lifestyle retailer targeting the tween girl market, formerly owned by Tween Brands, Inc. and later by Ascena Retail Group since 2009.

Anchor Blue Inc. was an American clothing retailer which had over 100 stores in the western United States. It generally sold its own Anchor Blue brand name of youth-oriented denim, graphic T-shirts and casual clothing. Sometimes the company was referred to as the Anchor Blue Inc., but their retail clothing chain of stores was labeled as Anchor Blue. The Anchor Blue and Miller's Outpost brands were acquired by Perry Ellis International in 2012.

Steve & Barry's was an American retail clothing chain, featuring casual clothing, footwear and accessories. By mid-2008, the chain operated 276 stores in 39 states. The company was headquartered in Port Washington, New York. The company liquidated all of its stores throughout 2008 and 2009.

Charming Shoppes is a specialty and plus size clothing retail holding company based in Bensalem, Pennsylvania; a suburb of Philadelphia. Its subsidiaries include Lane Bryant, Cacique, Fashion Bug and Catherines Plus. Clothes were sold from over 2300 retail stores in the United States, as well as numerous catalogs and online sites. In 2012, the company and assets were acquired by Ascena Retail Group.

Sophie Mechaly, previously known as Sophie Albou, is a Paris-born designer best known as the founder of the Paul & Joe clothing line. The daughter of Yvan and Nicole Haggiag, a clothing company executive and designer respectively, Mechaly was educated at the Sorbonne and the Institut Français de la Mode before going to work for the clothing company Azzedine Alaia in 1983.

Norm Thompson Outfitters is a privately owned catalog and internet retailer based in Middleton, Massachusetts that was previously based in Hillsboro, Oregon, United States until September 2016. The Norm Thompson offices were closed and consolidated due to Bluestem's acquisition of their parent company, Orchard Brands, in July 2015. Founded in 1949 by Norman A. (Norm) Thompson as a mail order business, it grew to annual sales of $200 million before it was sold to Golden Gate Capital Partners in 2006. The company sells clothing, gadgets, furniture, kitchen items, and gift items from its namesake catalog as well as from its Solutions and Sahalie brands. John Difrancesco serves as president and chief executive of the 500 employee company.

M&Co. is a Scottish chain store selling women's, men's, and children's clothes, as well as small homeware products. Its head office is in Inchinnan, Scotland, though its main buying office is in London. Previously, its head office was at Caledonia House in Paisley.

Mondetta is a Canadian casual and sportswear design and manufacturing company. The brand is best known for its world-flag themed apparel. Based in Winnipeg, Manitoba, Canada, Mondetta has three main divisions: Mondetta, MPG and private label.

The Gap, Inc., commonly known as Gap Inc. or Gap, is an American worldwide clothing and accessories retailer.

Cherokee Inc., also known as Apex Global Brands, is an American based global apparel and footwear company, headquartered in Sherman Oaks, California. The company was established in 1973 and its brands are available in 110 countries in 12,000 retail locations and on digital commerce.

Limited Too was a clothing and lifestyle retailer, and current brand, targeting the tween girl market, formerly owned by Tween Brands, Inc.. Since 2015, the brand has been owned by Bluestar Alliance, LLC after being dormant for six years after the store bearing its name converted to Justice (store).