AgustaWestland was a helicopter design and manufacturing company. [2] It is a wholly owned subsidiary of Leonardo S.p.A. (previously Finmeccanica). [3] It was formed in July 2000 as an Anglo-Italian [4] multinational company, when Finmeccanica and GKN merged their respective helicopter subsidiaries (Agusta and Westland Helicopters) to form AgustaWestland, [5] with each holding a 50% share. Finmeccanica acquired GKN's stake in AgustaWestland in 2004.

In 2016, it merged into Leonardo where it became the company's helicopters division under the Leonardo Helicopters brand. [6] [7]

The collaboration between Agusta and Westland dates back to 1981, when the two companies established the European Helicopter Industries joint venture with the aim of developing a new medium-size utility helicopter, the EH101.

In March 1999, Finmeccanica and GKN announced their intention to merge their respective helicopter subsidiaries. [8] The two parties announced finalised terms for the merger in July 2000, which included a 50:50 ownership structure, and the payment of top-up fees to GKN to compensate for a disparity in profit levels between Agusta and Westland. [9] [10]

In January 2002, AgustaWestland announced that it would be cutting a total of 950 jobs in the United Kingdom and closing its factory in Weston-super-Mare, which carried out customer support work, as activity was concentrated at its main site in Yeovil. [11]

AgustaWestland opened offices in Philadelphia in 2005, and won a contract to build the new presidential helicopter Marine One over the U.S. manufacturer Sikorsky Aircraft, but this program was canceled in 2009. [15] In November 2005 it was announced that AgustaWestland had agreed to acquire Bell Helicopter's 25 per cent interest in the AB139 medium twin helicopter program, and to increase its interest in the BA609 civil tiltrotor aircraft from 25 per cent to 40 per cent. [16]

In June 2008, AgustaWestland and the Russia-based helicopter manufacturer Russian Helicopters agreed to form a new joint venture company to assemble AW139 helicopters in Russia. [17] Construction of a $50 million helicopter assembly facility in the town of Tomilino near Moscow began in June 2010. [18] [19]

In September 2012, AgustaWestland and Northrop Grumman announced the signing of a comprehensive teaming agreement under which the companies would jointly bid for contracts to build the U.S. Air Force Combat Rescue helicopter and U.S. Navy's new "Marine One" presidential helicopter. [21]

India signed a contract to purchase 12 AgustaWestland AW101 helicopters in February 2010 for the Communication Squadron of Indian Air Force to carry the president, PM and other VVIPs. Controversy over the contract came to light on 12 February 2013 with the arrest of Giuseppe Orsi, the CEO of Finmeccanica, AgustaWestland's parent company by Italian authorities; [23] the following day Indian Defence Minister A.K. Antony ordered a probe into the contract. [24]

In January 2014, India cancelled the US$630 million deal with AgustaWestland for purchasing 12 AW101s meant for use by VIPs. Following this event, in June 2014 India recovered the entire sum of Rs 18.18 billion which it had paid to the company. [25] The decision to annul the 2010 deal, being probed by the CBI for irregularities, came after a meeting between Prime Minister Manmohan Singh and Defence Minister A.K. Antony in New Delhi. According to the Defence Ministry, the government cancelled the contract "on grounds of breach of the Pre-contract Integrity pact and the agreement by AWIL (AgustaWestland International Ltd)". The contract was frozen in February 2013 after allegations surfaced that US$60 million had been paid as a bribe. [26]

Westland Helicopters was a British aerospace company. Originally Westland Aircraft, the company focused on helicopters after the Second World War. It was amalgamated with several other British firms in 1960 and 1961. 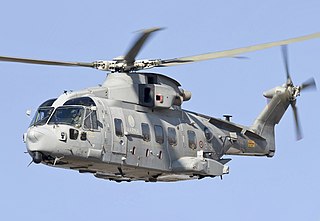 The AgustaWestland AW101 is a medium-lift helicopter in military and civil use. First flown in 1987, it was developed by a joint venture between Westland Helicopters in the United Kingdom and Agusta in Italy in response to national requirements for a modern naval utility helicopter. Several operators, including the armed forces of Britain, Denmark, and Portugal, use the name Merlin for their AW101 aircraft. It is manufactured at factories in Yeovil, England and Vergiate, Italy; licensed assembly work has also taken place in Japan and the United States. 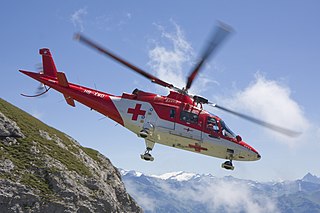 Agusta was an Italian helicopter manufacturer. It was based in Samarate, Northern Italy. The company was founded by Count Giovanni Agusta in 1923, who flew his first airplane in 1907. The MV Agusta motorcycle manufacturer began as an offshoot of the Agusta aviation company at the end of the Second World War as a means to save the jobs of employees of the Agusta firm. 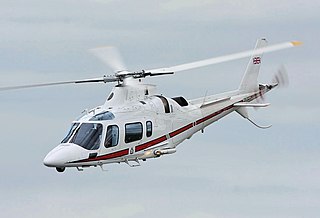 The AgustaWestland AW109, originally the Agusta A109 is a lightweight, twin-engine, eight-seat multi-purpose helicopter built by the Italian manufacturer Leonardo S.p.A.. It was the first all-Italian helicopter to be mass-produced. 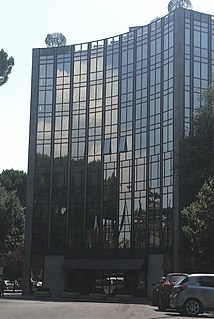 Leonardo S.p.A., formerly Leonardo-Finmeccanica and Finmeccanica, is an Italian multinational company specialising in aerospace, defence and security. Headquartered in Rome, the company has 180 sites worldwide. It is the eighth largest defence contractor in the world based on 2018 revenues. The company is partially owned by the Italian government, which holds 30.2% of the company's shares and is its largest shareholder.

The AgustaWestland AW609, formerly the Bell/Agusta BA609, is a twin-engined tiltrotor VTOL aircraft with a configuration similar to that of the Bell Boeing V-22 Osprey. It is capable of landing vertically like a helicopter while having a range and speed in excess of conventional rotorcraft. The AW609 is aimed at the civil aviation market, in particular VIP customers and offshore oil and gas operators. 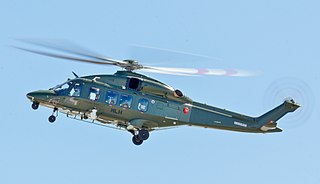 The AgustaWestland AW149 is a medium-lift military helicopter developed by AgustaWestland, now Leonardo. On 20 June 2011 AgustaWestland announced the AW189, a civilian development of the AW149, for service in 2013. 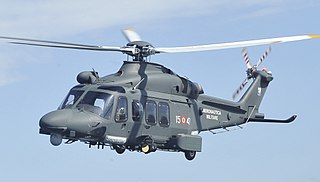 The AgustaWestland AW139 is a 15-seat medium-sized twin-engined helicopter developed and built by AgustaWestland. It is marketed at several different roles, including VIP/corporate transport, offshore transport, fire fighting, law enforcement, search and rescue, emergency medical service, disaster relief, and maritime patrol. In addition to AgustaWestland's manufacturing facilities in Italy and the United States, the AW139 is produced in Russia by HeliVert, a joint venture between AgustaWestland and Russian Helicopters. 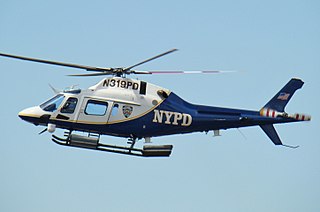 The AgustaWestland AW119 Koala, produced by Leonardo since 2016, is an eight-seat utility helicopter powered by a single turboshaft engine produced for the civil market. Introduced as the Agusta A119 Koala prior to the Agusta-Westland merger, it is targeted at operators favoring lower running costs of a single-engine aircraft over redundancy of a twin.

The AgustaWestland AW159 Wildcat is a British military helicopter. It is an improved version of the Westland Super Lynx designed to serve in the battlefield utility, search and rescue and anti-surface warfare roles. In British service, common variants are being operated by both the Royal Navy and British Army, having replaced their Lynx Mk.7/8/9 predecessors. The AW159 has also been offered to several export customers, and has been ordered by the Republic of Korea Navy and the Philippine Navy. 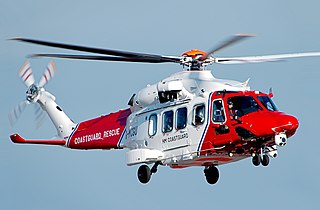 The AgustaWestland AW189 is a twin-engined, medium-lift helicopter manufactured by Leonardo S.p.A.. It is derived from the AW149, and shares similarities with the AW139 and AW169. 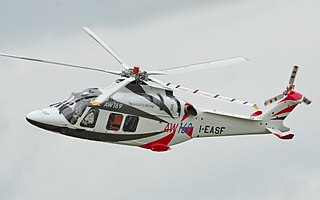 Giuseppe Orsi is an Italian engineer, businessman, and corporate executive. He had a long career at Finmeccanica, Italy's leading high-technology group, and in November 2011 was appointed its Chief Executive Officer and Chairman.

Indian Rotorcraft Limited (IRL) is a company specialising in the manufacture of helicopters within India for the global market. Established in 2010, it is operated as a joint venture between Indian conglomerate Tata Sons and Anglo-Italian defense company Leonardo S.p.A.. Ground was broken on a dedicated facility at Rajiv Gandhi International Airport, Hyderabad in March 2012; its completion has been delayed reportedly due to protracted rulings from overseeing Indian government agencies.

Also referred to as the AugustaWestland VVIP chopper deal, the Indian helicopter bribery scandal by Congress led UPA Government refers to a multimillion-dollar corruption case in India, wherein money was paid to middlemen and Indian officials in 2006 and 2007 to purchase helicopters for high level politicians. As per the CBI, this amounted to ₹2.5 billion (US$35 million), transferred through bank accounts in the UK and UAE.

The AgustaWestland Project Zero is a hybrid tiltrotor/Lift fan aircraft. It has been developed by AgustaWestland as a technology demonstrator, and is used to investigate all-electric propulsion and other advanced technologies. It is the world's first electric tiltrotor aircraft.

Bruno Spagnolini is an Italian engineer and businessman who served as CEO of AgustaWestland, the helicopter-manufacturing division of Finmeccanica. After being charged in 2013 with participation in a bribery scandal, he resigned from the position as CEO. On October 9, 2014, an Italian court sentenced him to two years in prison for false bookkeeping. As of November 2014, an investigation in India was still underway.

Lorenzo Borgogni is an Italian businessman who was the longtime director of external relations at Finmeccanica, a partly government-owned entity that is Italy's leading high-tech industrial group and a major international player in aerospace, defense and security, with offices in over 100 countries.