listen )) (National Association of Securities Dealers Automated Quotations Stock Market) is an American stock exchange based in New York City. It is ranked second on the list of stock exchanges by market capitalization of shares traded, behind the New York Stock Exchange. [3] The exchange platform is owned by Nasdaq, Inc., [4] which also owns the Nasdaq Nordic stock market network and several U.S.-based stock and options exchanges.

"Nasdaq" was initially an acronym for the National Association of Securities Dealers Automated Quotations. [5] It was founded in 1971 by the National Association of Securities Dealers (NASD), now known as the Financial Industry Regulatory Authority (FINRA). [6] On February 8, 1971, the Nasdaq stock market began operations as the world's first electronic stock market. [6] At first, it was merely a "quotation system" and did not provide a way to perform electronic trades. [7]

The NASDAQ Stock Market eventually assumed the majority of major trades that had been executed by the over-the-counter (OTC) system of trading, but there are still many securities traded in this fashion. As late as 1987, the Nasdaq exchange was still commonly referred to as "OTC" in media reports [8] and also in the monthly Stock Guides (stock guides and procedures) issued by Standard & Poor's Corporation. [9] Over the years, it became more of a stock market by adding trade and volume reporting and automated trading systems. In 1981, Nasdaq traded 37% of the U.S. securities markets' total of 21 billion shares. By 1991, Nasdaq's share had grown to 46%. [10] In 1992, the Nasdaq Stock Market joined with the London Stock Exchange to form the first intercontinental linkage of capital markets. [11] In 1998, it became the first stock market in the United States to trade online, using the slogan "the stock market for the next hundred years". [12] The Nasdaq Stock Market attracted many companies during the dot-com bubble.

Its main index is the NASDAQ Composite, which has been published since its inception. The QQQ exchange-traded fund tracks the large-cap NASDAQ-100 index, which was introduced in 1985 alongside the NASDAQ Financial-100 Index, which tracks the largest 100 companies in terms of market capitalization.

In a series of sales in 2000 and 2001, FINRA sold its stake in the Nasdaq. On July 2, 2002, Nasdaq Inc. became a public company via an initial public offering. [15] In 2006, the status of the Nasdaq Stock Market was changed from a stock market to a licensed national securities exchange. [16] In 2007, it merged with OMX, a leading exchange operator in the Nordic countries, expanded its global footprint, and changed its name to the NASDAQ OMX Group. [17]

To qualify for listing on the exchange, a company must be registered with the United States Securities and Exchange Commission (SEC), must have at least three market makers (financial firms that act as brokers or dealers for specific securities) and must meet minimum requirements for assets, capital, public shares, and shareholders.

In February 2011, in the wake of an announced merger of NYSE Euronext with Deutsche Börse, speculation developed that NASDAQ OMX and Intercontinental Exchange (ICE) could mount a counter-bid of their own for NYSE. NASDAQ OMX could be[ when? ] looking to acquire the American exchange's cash equities business, ICE the derivatives business. At the time, "NYSE Euronext's market value was $9.75 billion. Nasdaq was valued at $5.78 billion, while ICE was valued at $9.45 billion." [18] Late in the month, Nasdaq was reported to be considering asking either ICE or the Chicago Mercantile Exchange to join in what would probably have to be, if it proceeded, an $11–12 billion counterbid. [19]

The European Association of Securities Dealers Automatic Quotation System (EASDAQ) was founded as a European equivalent to the Nasdaq Stock Market. It was purchased by NASDAQ in 2001 and became NASDAQ Europe. In 2003, operations were shut down as a result of the burst of the dot-com bubble. [23] In 2007, NASDAQ Europe was revived first as Equiduct and was acquired by Börse Berlin later that year. [24]

In November 2016, chief operating officer Adena Friedman was promoted to chief executive officer, becoming the first woman to run a major exchange in the U.S. [27]

In October 2018, the SEC ruled that the New York Stock Exchange and Nasdaq did not justify the continued price increases when selling market data. [29] [30] [31]

In December 2020, NASDAQ announced that it would strip its indexes of four Chinese companies in response to Executive Order 13959. [32]

The Nasdaq Stock Market sessions, with times in the Eastern Time Zone are:

The New York Stock Exchange is an American stock exchange in the Financial District of Lower Manhattan in New York City. It is by far the world's largest stock exchange by market capitalization of its listed companies at US$30.1 trillion as of February 2018. The average daily trading value was approximately US$169 billion in 2013. The NYSE trading floor is at the New York Stock Exchange Building on 11 Wall Street and 18 Broad Street and is a National Historic Landmark. An additional trading room, at 30 Broad Street, was closed in February 2007.

A stock market, equity market, or share market is the aggregation of buyers and sellers of stocks, which represent ownership claims on businesses; these may include securities listed on a public stock exchange, as well as stock that is only traded privately, such as shares of private companies which are sold to investors through equity crowdfunding platforms. Investment is usually made with an investment strategy in mind.

The Standard and Poor's 500, or simply the S&P 500, is a stock market index tracking the stock performance of 500 large companies listed on exchanges in the United States. It is one of the most commonly followed equity indices. As of December 31, 2020, more than $5.4 trillion was invested in assets tied to the performance of the index.

An exchange-traded fund (ETF) is a type of investment fund and exchange-traded product, i.e. they are traded on stock exchanges. ETFs are similar in many ways to mutual funds, except that ETFs are bought and sold from other owners throughout the day on stock exchanges whereas mutual funds are bought and sold from the issuer based on their price at day's end. An ETF holds assets such as stocks, bonds, currencies, futures contracts, and/or commodities such as gold bars, and generally operates with an arbitrage mechanism designed to keep it trading close to its net asset value, although deviations can occasionally occur. Most ETFs are index funds: that is, they hold the same securities in the same proportions as a certain stock market index or bond market index. The most popular ETFs in the U.S. replicate the S&P 500 Index, the total market index, the NASDAQ-100 index, the price of gold, the "growth" stocks in the Russell 1000 Index, or the index of the largest technology companies. With the exception of non-transparent actively managed ETFs, in most cases, the list of stocks that each ETF owns, as well as their weightings, is posted daily on the website of the issuer. The largest ETFs have annual fees of 0.03% of the amount invested, or even lower, although specialty ETFs can have annual fees well in excess of 1% of the amount invested. These fees are paid to the ETF issuer out of dividends received from the underlying holdings or from selling assets. 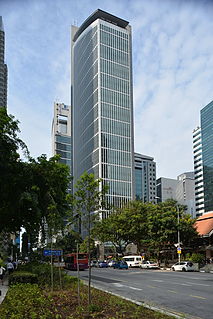 The Singapore Exchange Limited (SGX) is an investment holding company located in Singapore and provides different services related to securities and derivatives trading and others. SGX is also a member of the World Federation of Exchanges and the Asian and Oceanian Stock Exchanges Federation.

The Wilshire 5000 Total Market Index, or more simply the Wilshire 5000, is a market-capitalization-weighted index of the market value of all American-stocks actively traded in the United States. As of March 31, 2022, the index contained 3,660 components. The index is intended to measure the performance of most publicly traded companies headquartered in the United States, with readily available price data,. Hence, the index includes a majority of the common stocks and REITs traded primarily through New York Stock Exchange, NASDAQ, or the American Stock Exchange. Limited partnerships and ADRs are not included. It can be tracked by following the ticker ^W5000. 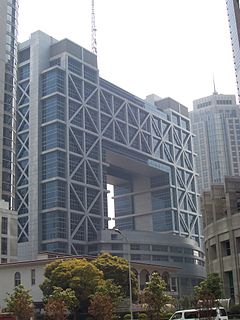 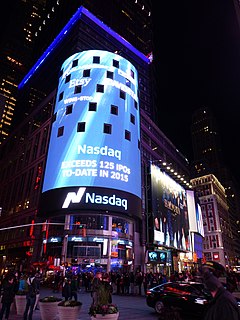 NYSE Arca, previously known as ArcaEx, an abbreviation of Archipelago Exchange, is an exchange on which both stocks and options are traded. It was owned by Intercontinental Exchange. It merged with the New York Stock Exchange in 2006 and now operates as a subsidiary of the NYSE Group, Inc. It is headquartered in Chicago.

A capitalization-weightedindex, also called a market-value-weighted index is a stock market index whose components are weighted according to the total market value of their outstanding shares. Every day an individual stock's price changes and thereby changes a stock index's value. The impact that individual stock's price change has on the index is proportional to the company's overall market value, in a capitalization-weighted index. In other types of indices, different ratios are used.

Inet was an electronic trading platform based on a system developed by Instinet in the 1970s that merged with Island ECN in 2002 and was subsequently acquired by NASDAQ in 2005.