The current location of the Indonesian Stock Exchange is located in the IDX building in the Sudirman Central Business District, South Jakarta, close to Pacific Place Jakarta.

Although the capital market has existed since 1912, the development and growth of the capital market did not go as expected, even during several periods of capital market activity experiencing a vacuum. This was caused by several factors such as the world war which required the stock exchange to be closed, including in 1914-1918 the stock exchange was closed due to the occurrence of World War I. World II, the Stock Exchanges in Semarang and Surabaya had to be closed again in early 1939, and continued with the closing of the Stock Exchanges in Jakarta in 1942–1952. The transfer of power from the colonial government to the government of the Republic of Indonesia, and various conditions that caused the operation of the stock exchange to not run properly.

The Government of the Republic of Indonesia reactivated the capital market in 1977, the Stock Exchange was inaugurated by President Soeharto on August 10, 1977. JSE is run under BAPEPAM (Capital Market Executing Agency). The reactivation of the capital market was also marked by going public with PT Semen Cibinong as the first issuer.

However, in 1977-1987 trading on the Stock Exchange was very sluggish. The number of issuers until 1987 only reached 24 issuers. At that time, people preferred banking instruments to capital market instruments. Finally, in 1987 the Stock Exchange was deregulated by presenting the December 1987 Package (PAKDES 87) which made it easier for companies to conduct Public Offerings and foreign investors to invest in Indonesia. Stock Exchange trading activities also increased in 1988-1990 after the deregulation package in the banking and capital markets was launched. JSE's door is open to foreigners.

The Indonesian Parallel Exchange (BPI) began operating and is managed by the Money and Securities Trading Union (PPUE) in 1988 with its organization consisting of brokers and dealers. In addition, in the same year, the Government issued the December 88 Package (PAKDES 88) which made it easier for companies to go public and several other policies that were positive for capital market growth. The Surabaya Stock Exchange (BES) began operating in 1989 and is managed by a privately owned Limited Liability Company, namely the Surabaya Stock Exchange.

On July 12, 1992, which has been designated as the Anniversary of the JSE, the JSE officially became a private company (privatization). BAPEPAM changed to Capital Market Supervisory Agency (formerly; Capital Market Implementing Agency). One year later on December 21, 1993, PT Pemeringkat Efek Indonesia (PEFINDO) was established. On May 22, 1995, the Jakarta Stock Exchange launched a trading Automated System which was implemented using the JATS ( Jakarta Automated Trading Systems) computer system.). In the same year on November 10, the Government of Indonesia issued Law Number 8 of 1995 concerning the Capital Market. This law came into effect in January 1996. The Indonesia Parallel Exchange was then merged with the Surabaya Stock Exchange. Then one year later, August 6, 1996, the Indonesian Clearing and Guarantee Corporation (KPEI) was established. This was followed by the establishment of the Indonesian Central Securities Depository (KSEI) the following year, 23 December 1997. The scripless trading system in 2000 was applied to the Indonesian capital market, and in 2002 the JSX began to apply the remote trading system. ). In the same year, the change of transaction from T+4 to T+3 was completed. In 2004, the Stock Exchange released Stock Options .

On November 30, 2007, the Surabaya Stock Exchange (BES) and the Jakarta Stock Exchange (JSX) were finally merged and changed their names to the Indonesia Stock Exchange (IDX). After the birth of the IDX, a trading suspension was enforced in 2008 and the Indonesian Stock Price Appraiser (PHEI) was formed in 2009. In addition, in 2009, the Indonesia Stock Exchange changed the old trading system (JATS) and launched a new trading system used by the Indonesian Stock Exchange. IDX until now, namely JATS-NextG. Several other bodies were also established to increase trading activities, such as the establishment of PT Indonesian Capital Market Electronic Library (ICaMEL) in August 2011. The Financial Services Authority (OJK) in January 2012, and at the end of 2012, the Securities Investor Protection Fund(SIPF), and Sharia Principles and Sharia Trading Mechanisms were also launched. IDX also made several updates, on January 2, 2013, the trading hours were updated, and the following year the Lot Size and Tick Price were adjusted again, and in 2015 TICMI merged with ICaMEL.

The Indonesia Stock Exchange also created a campaign called “Yuk Nabung Saham” aimed at all Indonesian people wanting to start investing in the capital market. IDX introduced the campaign for the first time on November 12, 2015, and this campaign is still being implemented today, and in the same year the LQ-45 Index Futures was inaugurated. In 2016, Tick Size and Autorejection limits were adjusted again, IDX Channel was launched, and this year IDX participated in the success of the Tax Amnesty activities and inaugurated the Go Public Information Center . In 2017, IDX Incubator was inaugurated, margin relaxation and inaugurationIndonesia Securities Fund . In 2018, the Trading System and New Data Center were updated, launching T+2 Transaction Settlement (T+2 Settlement ) and Adding Special Notation Information Displays on Listed Company codes.

On 15 January 2018, a mezzanine walkway that was hanging on the second floor of the IDX collapsed, which sustained at least 77 injuries. Most of the injured were university students who were visiting the building, when the incident occurred at about 12:10 WIB (UTC+7:00). [8] [9] [10]

All times are based on the Jakarta Automated Trading System (JATS), currently in WIB (UTC+7)

In November 2012, IDX received an approval from the Capital Market and Financial Institution Supervisory Agency (Bapepam-LK) for its plan to start trading 30 minutes earlier and instituting a pre- and post-closing session to avoid price manipulation. [11]

Negotiated market follows the same time as regular market, but extend to 16:15 on all weekdays.

The trading hour was advanced 30 minutes earlier to accommodate traders from Central and Eastern Indonesia time zones that are one and two hours in advance, respectively. [12] (JATS is based on WIB) The change is also meant to put it in line with other Asian markets, namely Singapore and Hong Kong stock exchanges.

Since the COVID-19 pandemic began, the regular market trading hours in the Indonesian Stock Exchange is open from 09.00 to 15.00, with the following breakdowns:

To increase transactions, starting on 2 May 2016 Indonesia Stock Exchange introduced new tick price with a lot as 100 shares as before. [13]

Two of the primary stock market indices used to measure and report value changes in representative stock groupings are the Jakarta Composite Index and the Jakarta Islamic Index (JII). The JII was established in 2002 to act as a benchmark in measuring market activities based on Sharia (Islamic law). Currently, there are approximately 30 corporate stocks listed on the JII. [14] The FTSE/ASEAN Indices were launched by the five ASEAN exchanges (Singapore Exchange, Bursa Malaysia, The Stock Exchange of Thailand, Jakarta Stock Exchange, and The Philippine Stock Exchange) and global index provider FTSE on 21 September 2005.

The Nasdaq Stock Market is an American stock exchange based in New York City. It is ranked second on the list of stock exchanges by market capitalization of shares traded, behind the New York Stock Exchange. The exchange platform is owned by Nasdaq, Inc., which also owns the Nasdaq Nordic stock market network and several U.S.based stock and options exchanges. 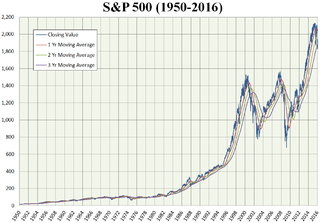 The Standard and Poor's 500, or simply the S&P 500, is a stock market index tracking the performance of 500 large companies listed on stock exchanges in the United States. It is one of the most commonly followed equity indices. As of December 31, 2020, more than $5.4 trillion was invested in assets tied to the performance of the index.

Penny stocks are common shares of small public companies that trade for less than one dollar per share. The S&P/ASX 200 index is a market-capitalization weighted and float-adjusted stock market index of stocks listed on the Australian Securities Exchange. The index is maintained by Standard & Poor's and is considered the benchmark for Australian equity performance. It is based on the 200 largest ASX listed stocks, which together account for about 82% of Australia's sharemarket capitalisation.

Ho Chi Minh Stock Exchange, formerly known as HCM Securities Trading Center, is a stock exchange in Ho Chi Minh City, Vietnam. It was established in 1998 under Decision No. 127/1998/QD-TTg of the Prime Minister. HCM Securities Trading Center officially opened on July 20, 2000 and had its first trading session on July 28, 2000 with 02 listed companies, 06 security company members.

In business and investing, term microcap stock refers to the stock of public companies in the United States which have a market capitalization of roughly $50 million to $300 million. The shares of companies with a market capitalization of less than $50 million are typically referred to as nano-cap stocks. Many micro-cap and nano-cap stocks are traded over-the-counter with their prices quoted on the OTCBB, OTC Link LLC, or the Pink Sheets. The larger, more established micro-caps are listed on the NASDAQ Capital Market or American Stock Exchange (AMEX).

The SET50 and SET100 Indices are the primary stock indices of Thailand. The constituents of both lists are companies listed on the Stock Exchange of Thailand (SET) in Bangkok.

PFTS index is a benchmark index of PFTS Ukraine Stock Exchange, Ukraine's leading bourse. Beside PFTS Index, there are also the UX Index of the Ukrainian Exchange and the Ukrainian Average Index 50 (UAI-50) being composed by analysts of internet-publisher fundmarket.ua.

The CBV-Index, or Corporates and Businesses of Vietnam Index, is a market index containing the stocks of 50 leading corporations of Vietnam. Subsets of this index include the CBV 10 and CBV 20.

The S&P/ASX 300, or simply, ASX 300, is a stock market index of Australian stocks listed on the Australian Securities Exchange (ASX). The index is market-capitalisation weighted, meaning each company included is in proportion to the indexes total market value, and float-adjusted, meaning the index only considers shares available to public investors.

The Jakarta Islamic Index (JII) is a stock market index established on July 3, 2000 on the Indonesia Stock Exchange (IDX) to help facilitate the trading of public companies according to Syariah business code. Following Islamic law prohibits a company from involving itself in activities related to gambling, speculation, and traditional banking and financing. The JII may not list equities that produce or distribute food, drink, or morally harmful items that stand in contradiction with Islamic values.

In finance, a stock index, or stock market index, is an index that measures a stock market, or a subset of the stock market, that helps investors compare current stock price levels with past prices to calculate market performance.

ASEAN Exchanges is a collaboration of the 7 exchanges from Malaysia, Vietnam, Indonesia, Philippines, Thailand and Singapore to promote the growth of the ASEAN capital market by bringing more ASEAN investment opportunities to more investors.

Phillip Securities Indonesia is a financial services company based in Jakarta, Indonesia. It is listed as a member of Indonesia Stock Exchange.