Daylight saving time is no longer observed anywhere in Indonesia.

In Indonesia, the keeping of standard time is divided into three time zones:

During the colonial era, [4] the time zones in Indonesia (Dutch East Indies) were regulated as follows:

Proposal for a single time zone

Indonesia is an archipelagic country located in Southeast Asia, lying between the Indian Ocean and the Pacific Ocean. It is located in a strategic location astride or along major sea lanes connecting East Asia, South Asia and Oceania. Indonesia is the largest archipelago in the world. Indonesia's various regional cultures have been shaped—although not specifically determined—by centuries of complex interactions with its physical environment. 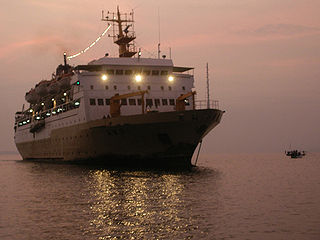 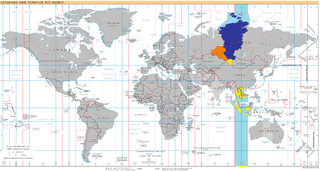 The ASEAN Common Time (ACT) is a proposal to adopt a standard time for all Association of Southeast Asian Nations member states. It was proposed in 1995 by Singapore, and in 2004 and 2015 by Malaysia to make business across countries easier. The proposal failed because of opposition in Thailand and Cambodia: Thais and Cambodians argued that UTC+08:00 was not really better than UTC+07:00, which is their current time zone.

This is a list of some of the regions of Indonesia. Many regions are defined in law or regulations by the central government. At different times of Indonesia's history, the nation has been designated as having regions that do not necessarily correlate to the current administrative or physical geography of the territory of the nation.

Liga Indonesia Third Division is the fifth level football league in Indonesian football competition system. Currently, this competition, along with First Division and Second Division, is managed by the Amateur League Board of the Football Association of Indonesia (PSSI).