Time in Iraq is given by Arabia Standard Time (AST) (UTC+03:00). Iraq does not currently observe daylight saving time. [1] 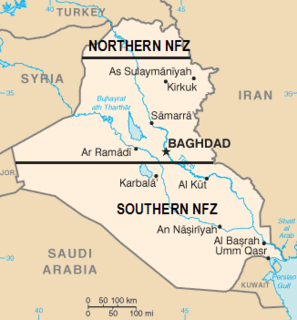 The Iraqi no-fly zones were a set of two separate no-fly zones (NFZs) that were proclaimed by the United States, United Kingdom, and France after the Gulf War of 1991 to protect the ethnic Kurdish minority in northern Iraq and Shiite Muslims in the south. Iraqi aircraft were forbidden from flying inside the zones. The policy was enforced by U.S., British, and French aircraft patrols until France withdrew in 1998. While the enforcing powers had cited United Nations Security Council Resolution 688 as authorizing the operations, the resolution contains no explicit authorization. The Secretary-General of the UN at the time the resolution was passed, Boutros Boutros-Ghali called the no-fly zones "illegal" in a later interview with John Pilger. 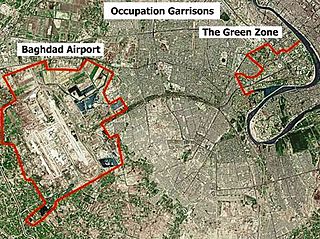 The Green Zone is the most common name for the International Zone of Baghdad. It is a 10-square-kilometer (3.9 sq mi) area in the Karkh district of central Baghdad, Iraq, that was the governmental center of the Coalition Provisional Authority during the occupation of Iraq after the American-led 2003 invasion and remains the center of the international presence in the city. Its official name beginning under the Iraqi Interim Government is the International Zone, though Green Zone remains the most commonly used term. The contrasting Red Zone refers to parts of Baghdad immediately outside the perimeter, but was also loosely applied to all unsecured areas outside the off-site military posts. Both terms originated as military designations. 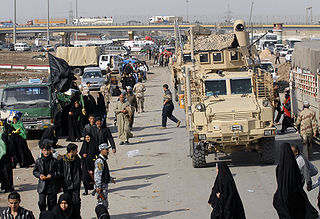 The Baghdad Airport Road is a 12-kilometre (7.5 mi) stretch of highway in Baghdad, Iraq linking the Green Zone, a heavily fortified area at the centre of Baghdad, to Baghdad International Airport (BIAP). It also links different parts of Baghdad to the Airport and connects neighbouring areas to each other. It became prominent after the 2003 invasion of Iraq following its capture by the Coalition Forces. Although it was commonly referred to by the military Main Supply Route (MSR) designation Route Irish, the route from the International Zone to the airport stretches over two MSRs: Route Aeros, the section leading into and out of the International Zone, and Route Irish, which stretches east from the airport, then turns south to a junction with Highway 1.

Operation Together Forward, also known as Forward Together, was an unsuccessful security plan in Iraq to significantly reduce the violence in Baghdad which had seen a sharp uprise since the mid-February 2006 bombing of the Askariya Mosque, a major Shiite Muslim shrine, in Samarra.

The 22 January 2007 Baghdad bombings was a terrorist attack that occurred when two powerful car bombs ripped through the Bab Al-Sharqi market in central Baghdad, killing at least 88 people and wounding 160 others in one of the bloodiest days since the US invasion of Iraq. The attack occurred two days after the start of the 10-day Shiite festival leading up to Ashoura. It also coincided with the arrival of 3,200 additional troops into Baghdad as part of the Iraq War troop surge of 2007.

Karkh or Al-Karkh is historically the name of the western half of Baghdad, Iraq, or alternatively, the western shore of the Tigris River as it ran through Baghdad. The eastern shore is known as Al-Rasafa. Its name is derived from the Syriac (ܟܪܟܐ) Karkha; citadel.

Operation Imposing Law, also known as Operation Law and Order, Operation Fardh al-Qanoon or Baghdad Security Plan (BSP), was a joint Coalition-Iraqi security plan conducted throughout Baghdad. Under the Surge plan developed in late 2006, Baghdad was to be divided into nine zones, with Iraqi and American soldiers working side-by-side to clear each sector of Shiite militias and Sunni insurgents and establish Joint Security Stations so that reconstruction programs could begin in safety. The U.S. military commander in Iraq, David Petraeus, went so far as to say Iraq would be "doomed" if this plan failed. Numerous members of Congress stated the plan was a critical period for the U.S. presence in Iraq. 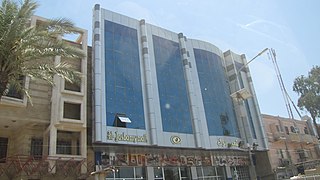 Al Mansour district is one of the nine administrative districts in Baghdad, Iraq. It is in western Baghdad and is bounded on the east by Karkh district in central Baghdad, to the north by Kadhimiya, to the west by Baghdad International Airport, and to the south by Baghdad Airport Road, on the other side of which is Al Rashid district.

The Siege of Sadr City was a blockade of the Shi'a district of northeastern Baghdad carried out by U.S. and Iraqi government forces in an attempt to destroy the main power base of the insurgent Mahdi Army in Baghdad. The siege began on 4 April 2004 – later dubbed "Black Sunday" – with an uprising against the Coalition Provisional Authority following the government banning of a newspaper published by Muqtada Al-Sadr's Sadrist Movement. The most intense periods of fighting in Sadr City occurred during the first uprising in April 2004, the second in August the same year, during the sectarian conflict that gripped Baghdad in late 2006, during the Iraq War troop surge of 2007, and during the spring fighting of 2008.

Bab Al-Sharqi is a neighborhood of central Baghdad, Iraq. The area surrounding Bab Al-Sharqi market is a stronghold of the Mahdi Army, the main Shia militia in central Iraq..

The 19 August 2009 Baghdad bombings were three coordinated car bomb attacks and a number of mortar strikes in the Iraqi capital, Baghdad. The explosives went off simultaneously across the capital at approximately 10:45 in the morning, killing at least 101 and wounding at least 565, making it the deadliest attack since the 14 August 2007 Yazidi communities bombings in northern Iraq which killed almost 800 people. The bombings were targeted at both government and privately owned buildings.

The 25 October 2009 Baghdad bombings were attacks in Baghdad, Iraq which killed 155 people and injured at least 721 people.

On 25 January 2010, three suicide car bombs exploded in quick succession in central Baghdad, Iraq. At least 41 people were killed. On 27 January 2010 the Islamic State of Iraq claimed responsibility for the attack.

The 2015–19 Iraqi protests started on 16 July 2015 in Baghdad and most of Iraqi cities, mainly in the central and southern provinces.

The following lists events that happened during 2016 in Iraq.