UTC+05:30 is an identifier for a time offset from UTC of +05:30. This time is used in India and Sri Lanka. It is five and a half hours ahead of Coordinated Universal Time.

In history daylight saving time was used too.

Indian Standard Time (IST) is the time observed throughout India, with a time offset of UTC+05:30. India does not observe daylight saving time (DST) or other seasonal adjustments. In military and aviation time IST is designated E* ("Echo-Star"). 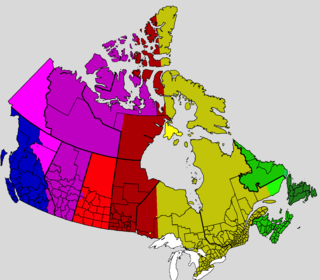 The Republic of India uses one time zone, which is Indian Standard Time (IST). This is UTC+05:30 — that is, five and a half hours ahead of Coordinated Universal Time. India does not observe daylight saving time.

The time zones of China refer to the time zone divisions used in China between 1918 and 1949. The first time zone plan was proposed by the Central Observatory of the Beiyang government in Peking (Beijing) in 1918. The proposal divided the country into five time zones: Kunlun (UTC+05:30), Sinkiang-Tibet (UTC+06:00), Kansu-Szechwan (UTC+07:00), Chungyuan (UTC+08:00) and Changpai (UTC+08:30). These time zones were ratified in 1939 by the Nationalist government in the Standard Time Conference, hosted by the Ministry of Interior of Executive Yuan. Because of the Second Sino-Japanese War, it was also stated that Kansu-Szechwan time shall be the sole national time during the war time. After the war in 1945, these five times zones were implemented national widely. In 1949, after the Chinese Civil War, the Central People's Government abolished the five time zones and announced to use a single time zone UTC+08:00 named Beijing Time (北京时间). The term Chungyuan Standard Time (中原標準時間) was still used by the Nationalist government on Taiwan until the early 2000s.

The 2012 AFC Cup group stage was contested by a total of 32 teams. They included:

The AVC qualification for the 2014 FIVB Volleyball Men's World Championship saw member nations compete for four places at the finals in Poland.

The 2018 Asia Rugby Sevens Series is the nineteenth edition of Asia's continental sevens tournament. The series will be played over three legs in Hong Kong, South Korea, and Sri Lanka.