Trochetiopsis erythroxylon, the Saint Helena redwood, is a species of plant, now extinct in the wild. It was formerly abundant enough in the upland parts of the island of Saint Helena for early settlers in the 17th century to use the timber to make their homes. It now exists in cultivation, although cultivated stock is weak. This species has pendant flowers, petals that turn pink with age, and white staminodes.

Saint Helena redwood is completely unrelated to the redwood tree of California and other trees called redwood.

It is, however, in the same genus as the Saint Helena ebony ( Trochetiopsis ebenus ) and a hybrid between them (Trochetiopsis × benjamini) is now often planted on the island.

The Saint Helena scrub and woodlands ecoregion covers the volcanic island of Saint Helena in the South Atlantic Ocean. The island's remote location gave rise to many endemic species. First discovered and settled in the 1500s, the island has been degraded by human activities. Most of its native habitat has been destroyed, and many of its unique plants and animals are extinct or endangered. 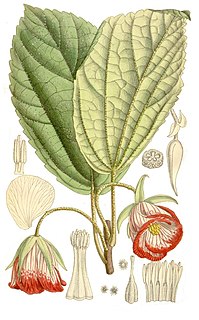 Trochetia is a genus of flowering plants from the family Malvaceae. They are endemic to the Mascarene Islands.

The Saint Helena olive was a plant from the monotypic genus of flowering plants Nesiota within the family Rhamnaceae.

Lachanodes arborea is a small tree in the family Asteraceae. It is an endangered endemic of the island of Saint Helena in the South Atlantic Ocean.

Melanodendron integrifolium is one of the endemic trees in the family Asteraceae from the island of Saint Helena. It is related to the Saint Helenan gumwoods and is the commonest of the remaining cabbage tree species of Saint Helena, although it is considered endangered due to the restricted population size. 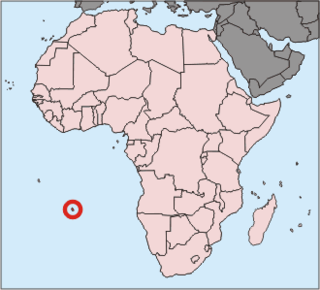 Acalypha rubrinervis is an extinct plant in the spurge family (Euphorbiaceae), from the island of Saint Helena in the South Atlantic Ocean. It was called string tree on account of the thin pendulous inflorescences which resembled red strings. Disturbance following human settlement on the island destroyed its habitat and it was last seen in the 19th century. It is thus one of a number of island plants to have been driven to extinction by human activity.

Pladaroxylon is a genus of trees in the groundsel tribe within the sunflower family.

The flora of Saint Helena, an isolated island in the South Atlantic Ocean, is exceptional in its high level of endemism and the severe threats facing the survival of the flora. In phytogeography, it is in the phytochorion St. Helena and Ascension Region of the African Subkingdom, in the Paleotropical Kingdom.

Dicksonia arborescens, the Saint Helena tree fern, is a characteristic plant of the "tree fern thicket" vegetation of the highest parts of the central ridge of the island of Saint Helena. It is the type species of the genus Dicksonia.

Trochetiopsis ebenus, the dwarf ebony or Saint Helena ebony, is a species of flowering plant that is endemic to the island of Saint Helena in the southern Atlantic Ocean. It is not related to the ebony of commerce, but is instead a member of the mallow family, Malvaceae. Saint Helena ebony is now critically endangered in the wild, being reduced to two wild individuals on a cliff, but old roots are sometimes found washed out of eroding slopes. These are collected on the island a used for inlay work, an important craft on Saint Helena. A related species, Trochetiopsis melanoxylon is now completely extinct.

Trochetiopsis melanoxylon, the dwarf ebony or St Helena ebony, of the island of Saint Helena is related to Trochetiopsis ebenus but is now extinct. It differed from T. ebenus by having much smaller flowers, sepals hairless on their interior surfaces and leaves densely hairy on both surfaces.

The flowering plant genus Trochetiopsis consists of two extant and one extinct species endemic to the island of Saint Helena. They were formerly placed in the family Sterculiaceae, but this is included in the expanded Malvaceae in the APG and most subsequent systematics. 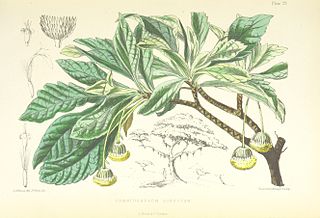 Commidendrum robustum, the Saint Helena gumwood, is a species of tree endemic to Saint Helena, Ascension and Tristan da Cunha. Though it is now comparatively rare, it was once one of the most abundant trees of mid-elevations of the island of Saint Helena in the South Atlantic Ocean. A small tree to 7–8 m, it was cut extensively for fuel in the early years of settlement of the island by the English East India Company. It has given its name to certain placenames on the island such as "Gumwoods". It is one of several species in the endemic genus Commidendrum.

Trimeris is a monotypic genus of the plant family Campanulaceae containing the single species Trimeris scaevolifolia. It is endemic to the island of St Helena in the South Atlantic Ocean. Its common name is St. Helena lobelia. It is a stout fleshy pale bright green, glabrous shrub, 1–2 m tall, branches lactiferous, shiny, succulent with conspicuous leaf scars. Leaves 4-12 x 1–4 cm, oblong-ovate to wedge and lance tip shaped, tapered but not sharply pointed, hairless smooth, glossy and rather succulent, somewhat clustered at tips of branches, exceeding the flowers. Leaf margin regularly toothed to finely serrate, although flower leaves may be entire. Inflorescence from the leaf axil 1-2-3 flowered. Flower stems 4–6 cm, erect bare. Sepals 4–7 mm, more or less linear, entire, blunt. Corolla 5-lobed, 10–22 mm x ca 12 mm, white with yellow markings, somewhat hairy inside the tube. Upper lobes 2, linear, pointed. Lower 3 lobes forming a 3-lobed lip, with lobes 5 mm long. Stamens with stalks minutely hairy. Ovary 6-8 mm long, with 2 compartments, obconic 10 ribbed, capsules obconic to club shaped, opening by 2 valves in upper part. Seeds smooth, small. It flowers usually in the winter and spring months, August to November. It is located on the central ridge above 700 m. There are patches near Cuckhold's Point, Mt Actaeon and also at High Peak and the Depot. The population fluctuates considerably as it regenerates best in disturbed open habitats. Among else it is found along path sides and also on the trunks of tree ferns. It is relatively short lived and disappears from overgrown places. Although the capsule resembles that of a Lobelia the branching and habit is unknown in that genus. In the past it was a constituent of thick, well-shaded forests. It has been suggested that it is related to the Pacific genera Sclerotheca and Apatahia. The old vernacular name 'milkwood' given to it by early settlers derives from the milky sap exuded from cut branches.

Mellissia was formerly a monotypic genus in the family Solanaceae with the single species, Mellissia begoniifolia, , endemic to the island of Saint Helena. It was named by Joseph Dalton Hooker in honour of John Charles Melliss, a 19th-century engineer and amateur naturalist who worked on Saint Helena. The plant is now known correctly as Withania begoniifolia (Roxb.) Hunz. & Barboza, the genus Mellissia having been subsumed in the genus Withania.

Petrobium is a genus in the sunflower tribe within the daisy family.

Nesohedyotis is a genus of flowering plants endemic to the island of Saint Helena in the South Atlantic Ocean. It in the family Rubiaceae.