The Malvales are an order of flowering plants. As circumscribed by APG II-system, the order includes about 6000 species within 9 families. The order is placed in the eurosids II, which are part of the eudicots.

The plants are mostly shrubs and trees; most of its families have a cosmopolitan distribution in the tropics and subtropics, with limited expansion into temperate regions. An interesting distribution occurs in Madagascar, where three endemic families of Malvales (Sphaerosepalaceae, Sarcolaenaceae and Diegodendraceae) occur.

Many species of Malvaceae sensu lato are known for their wood, with that of Ochroma (balsa) being known for its lightness, and that of Tilia (lime, linden, or basswood) as a popular wood for carving. Fruit of the cacao tree ( Theobroma cacao ) are used as an ingredient for chocolate. Kola nuts (genus Cola ) are notable for their high content of caffeine and, in past, were commonly used for preparing of various cola drinks. Other well-known members of Malvales in the APG II sense are daphnes, hibiscus, hollyhocks, okra, jute, baobab trees, cotton, kapok, and durian.

The morphology of Malvales is diverse, with few common characteristics. Among those most commonly encountered are palmate leaves, connate sepals, and a specific structure and chemical composition of the seeds. The cortex is often fibrous, built of soft phloem layers.

Early classifications such as that of Dahlgren placed the Malvales in the superorder Malviflorae (also called Malvanae). Family boundaries and circumscriptions of the "core" Malvales families, Malvaceae, Bombacaceae, Tiliaceae, and Sterculiaceae, have long been problematic. A close relationship among these families, and particularly Malvaceae and Bombacaceae, has generally been recognized, although until recently most classification systems have maintained them as separate families. With numerous molecular phylogenies showing Sterculiaceae, Bombacaceae, and Tiliaceae as traditionally defined are either paraphyletic or polyphyletic, a consensus has been emerging for a trend to expand Malvaceae to include these three families. This expanded circumscription of Malvaceae has been recognized in the most recent version of the Thorne system, by the Angiosperm Phylogeny Group, and in the most recent comprehensive treatment of vascular plant families and genera, the Kubitzki system. [3]

The dominant family in the APG II-system is the extended Malvaceae (Malvaceae sensu lato) with over 4000 species, followed by Thymelaeaceae with 750 species. This expanded circumscription of Malvaceae is taken to include the families Bombacaceae, Sterculiaceae and Tiliaceae. Under the older Cronquist system the order contained these four "core Malvales" families plus the Elaeocarpaceae and was placed among the Dilleniidae. Some of the currently included families were placed by Cronquist in the Violales.

Malvaceae, or the mallows, is a family of flowering plants estimated to contain 244 genera with 4225 known species. Well-known members of economic importance include okra, cotton, cacao and durian. There are also some genera containing familiar ornamentals, such as Alcea (hollyhock), Malva (mallow) and Lavatera, as well as Tilia. The largest genera in terms of number of species include Hibiscus, Sterculia, Dombeya, Pavonia and Sida. 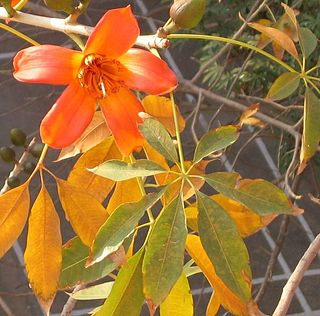 Bombacaceae were long recognised as a family of flowering plants or Angiospermae. The family name was based on the type genus Bombax. As is true for many botanical names, circumscription and status of the taxon has varied with taxonomic point of view, and currently the preference is to transfer most of the erstwhile family Bombacaceae to the subfamily Bombacoideae within the family Malvaceae in the order Malvales. The rest of the family were transferred to other taxa, notably the new family Durionaceae. Irrespective of current taxonomic status, many of the species originally included in the Bombacaceae are of considerable ecological, historical, horticultural, and economic importance, such as balsa, kapok, baobab and durian.

Violales is a botanical name of an order of flowering plants and takes its name from the included family Violaceae and proposed by Lindley (1853). The name has been used in several systems, although some systems used the name Parietales for similar groupings. In the 1981 version of the influential Cronquist system, order Violales was placed in subclass Dilleniidae with a circumscription consisting of the families listed below. Some classifications such as that of Dahlgren placed the Violales in the superorder Violiflorae. 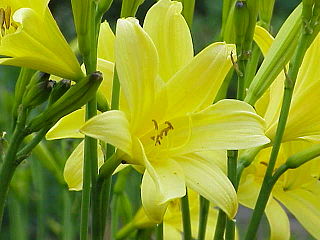 Hemerocallidoideae is the a subfamily of flowering plants, part of the family Asphodelaceae sensu lato in the monocot order Asparagales according to the APG system of 2016. Earlier classification systems treated the group as a separate family, the Hemerocallidaceae. The name is derived from the generic name of the type genus, Hemerocallis. The largest genera in the group are Dianella, Hemerocallis (15), and Caesia (11). 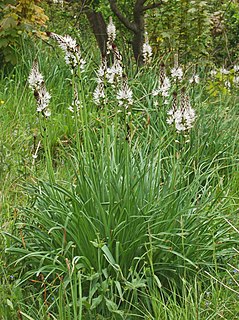 Tiliaceae is a family of flowering plants. It is not a part of the APG, APG II and APG III classifications, being sunk in Malvaceae as a modified Tilioideae but has an extensive historical record of use.

Sterculiaceae was a family of flowering plant based on the genus Sterculia. Genera formerly included in Sterculiaceae are now placed in the family Malvaceae, in the subfamilies: Byttnerioideae, Dombeyoideae, Helicteroideae and Sterculioideae. 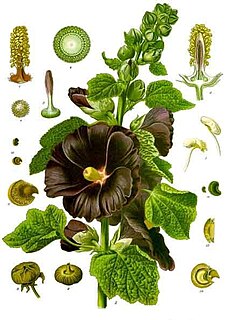 Columniferae is a descriptive botanical name. The Wettstein system used this name for an order of flowering plants, with the following circumscription:

Tilioideae is a flowering plant subfamily in the family Malvaceae, though it was formerly considered a large group, placed at family rank and called Tiliaceae. 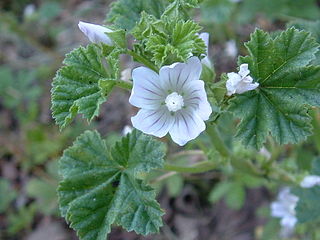 Malvoideae is a botanical name at the rank of subfamily, which includes in the minimum the genus Malva. It was first used by Burnett in 1835, but was not much used until recently, where, within the framework of the APG System, which unites the families Malvaceae, Bombacaceae, Sterculiaceae and Tiliaceae of the Cronquist system, the aggregate family Malvaceae is divided into 9 subfamilies, including Malvoideae. The Malvoideae of Kubitzki and Bayer includes 4 tribes:-

Sensu is a Latin word meaning "in the sense of". It is used in a number of fields including biology, geology, linguistics, semiotics, and law. Commonly it refers to how strictly or loosely an expression is used in describing any particular concept, but it also appears in expressions that indicate the convention or context of the usage.

Eudema is a genus of flowering plant in the family Brassicaceae from South America. It contains six species, including Eudema nubigena.

Durioneae is a tribe within the subfamily Helicteroideae of the plant family Malvaceae s.l. The tribe contains at least five genera, including Durio, the genus of tree species that produce Durian fruits.

Septotheca is a genus of trees in the family Malvaceae. It contains a single species Septotheca tessmannii, native to Peru, Colombia and Brazil.

Plagianthus is a genus of flowering plants confined to New Zealand and the Chatham Islands. The familial placement of the genus was controversial for many years, but modern genetic studies show it definitely belongs in the Malvaceae subfamily Malvoideae. The name means "slanted flowers".

Krapovickasia is a genus of flowering plants in the mallow family Malvaceae, disjunctly distributed in Mexico, Brazil, Paraguay, Uruguay and Argentina. Perennial herbs, they have yellowish to peach or faded rose colored flowers.

Bastardiastrum is a genus of flowering plants in the mallow family Malvaceae and is native to Mexico. They are shrubs or subshrubs with viscid stems.

Corynabutilon is a genus of flowering plants in the family Malvaceae, native to southern Chile and Argentina. They are shrubs or small trees.