Trop v. Dulles, 356 U.S. 86 (1958), was a United States Supreme Court case in which the Court ruled that it was unconstitutional to revoke citizenship as a punishment for a crime. The ruling's reference to "evolving standards of decency" is frequently cited in Eighth Amendment jurisprudence.

Albert Trop was a natural born citizen of the United States who, while serving as a private in the United States Army in 1944, deserted from an Army stockade in Casablanca, Morocco. The next day, he willingly surrendered to an army officer and was taken back to the base, where he was subsequently court-martialed, found guilty, and sentenced to three years at hard labor, forfeiture of pay, and a dishonorable discharge.

In 1952, Trop applied for a passport, which was denied because the Nationality Act of 1940 provided that members of the armed forces of the United States who deserted would lose their citizenship. (A 1944 amendment modified the Act such that a deserter would lose his citizenship only if, on these grounds, he had been dishonorably discharged or dismissed from the military.)

Trop filed suit in US federal courts seeking declaratory judgment that he was a US citizen.

The US district court ruled in favor of the government, and the United States Court of Appeals for the Second Circuit upheld the decision of the district court.

The Supreme Court reversed. In the decision, written by Chief Justice Earl Warren, the Court cited Perez v. Brownell , the Court had held that citizenship could be divested in the exercise of the foreign affairs power. However, "denationalization as a punishment is barred by the Eighth Amendment," describing it as "a form of punishment more primitive than torture" as it inflicts the "total destruction of the individual's status in organized society."

Dissenting, Justice Felix Frankfurter noted that desertion from the military can be punished by the death penalty, leading him to ask, "Is constitutional dialectic so empty of reason that it can be seriously urged that loss of citizenship is a fate worse than death?"

The Eighth Amendment of the United States Constitution prohibits the federal government from imposing excessive bail, excessive fines, or cruel and unusual punishments. This amendment was adopted on December 15, 1791, along with the rest of the United States Bill of Rights. The Amendment serves as a limitation upon the federal government to impose unduly harsh penalties on criminal defendants before and after a conviction. This limitation applies equally to the price for obtaining pretrial release and the punishment for crime after conviction. The phrases in this amendment originated in the English Bill of Rights of 1689.

The Fourteenth Amendment to the United States Constitution was adopted on July 9, 1868, as one of the Reconstruction Amendments. Arguably one of the most consequential amendments to this day, the amendment addresses citizenship rights and equal protection under the law and was proposed in response to issues related to former slaves following the American Civil War. The amendment was bitterly contested, particularly by the states of the defeated Confederacy, which were forced to ratify it in order to regain representation in Congress. The amendment, particularly its first section, is one of the most litigated parts of the Constitution, forming the basis for landmark decisions such as Brown v. Board of Education (1954) regarding racial segregation, Roe v. Wade (1973) regarding abortion, Bush v. Gore (2000) regarding the 2000 presidential election, and Obergefell v. Hodges (2015) regarding same-sex marriage. The amendment limits the actions of all state and local officials, and also those acting on behalf of such officials.

United States v. Wong Kim Ark, 169 U.S. 649 (1898), was a landmark decision of the US Supreme Court ruling that "a child born in the United States, of parents of Chinese descent, who, at the time of his birth, are subjects of the Emperor of China, but have a permanent domicil and residence in the United States, and are there carrying on business, and are not employed in any diplomatic or official capacity under the Emperor of China", automatically became a U.S. citizen at birth. This decision established an important precedent in its interpretation of the Citizenship Clause of the Fourteenth Amendment to the Constitution.

Edwards v. People of State of California, 314 U.S. 160 (1941), was a landmark United States Supreme Court case where a California law prohibiting the bringing of a non-resident "indigent person" into the state was struck down as unconstitutional.

Robinson v. California, 370 U.S. 660 (1962), is the first landmark decision of the United States Supreme Court in which the Eighth Amendment of the Constitution was interpreted to prohibit criminalization of particular acts or conduct, as contrasted with prohibiting the use of a particular form of punishment for a crime. In Robinson, the Court struck down a California law that criminalized being addicted to narcotics.

Cadena temporal and cadena perpetua were legal punishments. Cadena temporal included imprisonment for at least 12 years and one day, in chains, at hard and painful labor; the loss of many basic civil rights; and subjection to lifetime surveillance. Cadena perpetua is identical except that it is a sentence of life as opposed to a temporary status. 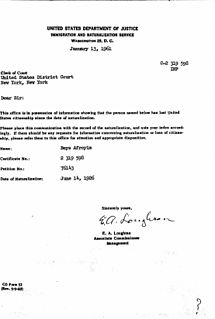 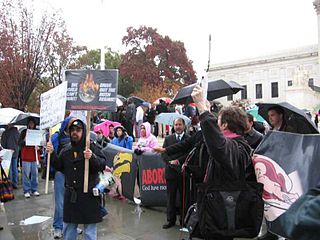 Perez v. Brownell, 356 U.S. 44 (1958), was a United States Supreme Court case in which the Court affirmed Congress's right to revoke United States citizenship as a result of a citizen's voluntary performance of specified actions, even in the absence of any intent or desire on the person's part to lose citizenship. Specifically, the Supreme Court upheld an act of Congress which provided for revocation of citizenship as a consequence of voting in a foreign election.

Stanford v. Kentucky, 492 U.S. 361 (1989), was a United States Supreme Court case that sanctioned the imposition of the death penalty on offenders who were at least 16 years of age at the time of the crime. This decision came one year after Thompson v. Oklahoma, in which the Court had held that a 15-year-old offender could not be executed because to do so would constitute cruel and unusual punishment. In 2003, the Governor of Kentucky Paul E. Patton commuted the death sentence of Kevin Stanford, an action followed by the Supreme Court two years later in Roper v. Simmons overruling Stanford and holding that all juvenile offenders are exempt from the death penalty.

Baze v. Rees, 553 U.S. 35 (2008), is a decision by the United States Supreme Court, which upheld the constitutionality of a particular method of lethal injection used for capital punishment.

Kennedy v. Louisiana, 554 U.S. 407 (2008), is a landmark decision by the Supreme Court of the United States that held that the Eighth Amendment's Cruel and Unusual Punishments Clause prohibits imposing the death penalty for the rape of a child in cases where the victim did not die and death was not intended.

Maynard v. Cartwright, 486 U.S. 356 (1988), is a United States Supreme Court case in which a unanimous Court found that the "especially heinous, atrocious or cruel" standard for the application of the death penalty as defined by the Eighth Amendment was too vague. As such, Oklahoma's law was overturned based on Furman v. Georgia (1972).

Farmer v. Brennan, 511 U.S. 825 (1994), was a case in which the Supreme Court of the United States ruled that a prison official's "deliberate indifference" to a substantial risk of serious harm to an inmate violates the cruel and unusual punishment clause of the Eighth Amendment. Farmer built on two previous Supreme Court decisions addressing prison conditions, Estelle v. Gamble and Wilson v. Seiter. The decision marked the first time the Supreme Court directly addressed sexual assault in prisons.

Nishikawa v. Dulles, 356 U.S. 129 (1958), is a United States Supreme Court case in which the Court ruled that a dual US/Japanese citizen who had served in the Japanese military during World War II could not be held to have lost his US citizenship unless the United States could prove that he had acted voluntarily.

Zemel v. Rusk, 381 U.S. 1 (1965), was a United States Supreme Court case regarding the right to travel and area restrictions on passports, holding that the Secretary of State is statutorily authorized to refuse to validate the passports of United States citizens for travel to Cuba and that the exercise of that authority is constitutionally permissible.

Citizens for Equal Protection v. Bruning, 455 F.3d 859, was a federal lawsuit filed in the United States District Court for the District of Nebraska and decided on appeal by the United States Court of Appeals for the Eighth Circuit. It challenged the federal constitutionality of Nebraska Initiative Measure 416, a 2000 ballot initiative that amended the Nebraska Constitution to prohibit the recognition of same-sex marriages, civil unions, and other same-sex relationships.

Heffernan v. City of Paterson, 578 U.S. ___ (2016), was a United States Supreme Court case in 2016 concerning the First Amendment rights of public employees. By a 6–2 margin, the Court held that a public employee's constitutional rights might be violated when an employer, believing that the employee was engaging in what would be protected speech, disciplines them because of that belief, even if the employee did not exercise such a constitutional right.

Timbs v. Indiana, 586 U.S. ___ (2019), was a United States Supreme Court case in which the Court dealt with the applicability of the excessive fines clause of the Constitution's Eighth Amendment to state and local governments in the context of asset forfeiture.