These beetles are mainly found in France, Italy, Greece, North Macedonia, Portugal, former Yugoslavia, Spain, in the Near East and in North Africa.

Larvae feed on roots, while the adults can be encountered from May through July feeding on flowers. They are 10–15 millimetres (0.39–0.59 in) long.

Head, scutellum and elytra are dark-brown, with a thick and long tawny hair on elytra and abdomen. Elytra show two series of white spots on the sides of the central hull. Scutellun is rounded and hairy, but glabrous in the posterior. The fifth humeral slot is bifurcated.

The Haliplidae are a family of water beetles who swim using an alternating motion of the legs. They are therefore clumsy in water, and prefer to get around by crawling. The family consists of about 200 species in 5 genera, distributed wherever there is freshwater habitat; it is the only extant member of superfamily Haliploidea. They are also known as crawling water beetles or haliplids.

Amphizoa is a genus of aquatic beetles in the suborder Adephaga, placed in its own monogeneric family, Amphizoidae. There are five known species of Amphizoa, three in western North America and two in eastern palearctic. They are sometimes referred to by the common name troutstream beetles.

Histeridae is a family of beetles commonly known as clown beetles or Hister beetles. This very diverse group of beetles contains 3,900 species found worldwide. They can be easily identified by their shortened elytra that leaves two of the seven tergites exposed, and their elbowed antennae with clubbed ends. These predatory feeders are most active at night and will fake death if they feel threatened. This family of beetles will occupy almost any kind of niche throughout the world. Hister beetles have proved useful during forensic investigations to help in time of death estimation. Also, certain species are used in the control of livestock pests that infest dung and to control houseflies. Because they are predacious and will even eat other Hister beetles, they must be isolated when collected.

The Omaliinae are a subfamily of the Staphylinidae, rove beetles.

Dynastes tityus, the eastern Hercules beetle, is a species of rhinoceros beetle that lives in the Eastern United States. The adult's elytra are green, gray or tan, with black markings, and the whole animal, including the male's horns, may reach 60 mm (2.4 in) in length. The grubs feed on decaying wood from various trees. 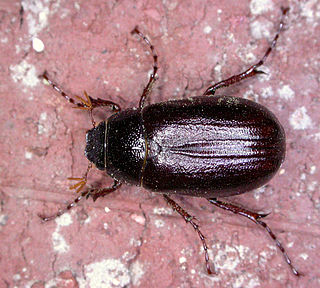 Phyllophaga is a very large genus of New World scarab beetles in the subfamily Melolonthinae. Common names for this genus and many other related genera in the subfamily Melolonthinae are May beetles, June bugs, and June beetles. They range in size from 12 to 35 mm and are blackish or reddish-brown in colour, without prominent markings, and often rather hairy ventrally. These beetles are nocturnal, coming to lights in great numbers. 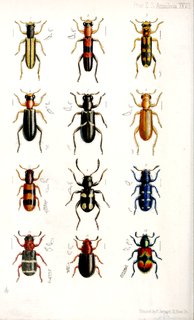 The Oriental beetle is a species of shining leaf chafer in the family Scarabaeidae. It is a beetle about 0.7 - 1.1 cm long, with mottled, metallic brown- and black-colored elytra and a similarly-colored thorax and head during the adult stage. It is sometimes confused with the larger and more colorful Japanese beetle. During the larval stage, the Oriental beetle can be identified by the parallel line raster pattern.

Nicrophorus interruptus is a species of burying beetle or sexton beetle belonging to the family Silphidae subfamily Nicrophorinae.

Mezium americanum, the American spider beetle or black spider beetle, is a species of beetle in the subfamily Ptininae, the spider beetles. These are sometimes mistaken for spiders or mites because of their rounded abdomens and long legs. It has a cosmopolitan distribution, but it is an exotic species in Australia.

Galeruca tanaceti is a species of leaf beetle described by Carl Linnaeus in his 1758 10th edition of Systema Naturae.

Glischrochilus is a genus of sap-feeding and predatory beetles under the family Nitidulidae, subfamily Cryptarchinae. Most members of this genus are commonly known as picnic beetles or beer bugs.

Polyarthron pectinicorne is a species of beetle in the family Cerambycidae. 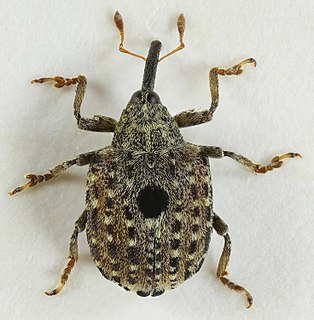 Xyloterinus is a genus of typical bark beetles in the family Curculionidae. This is a monotypic genus and the one described species is Xyloterinus politus. It is native to North America where it infests both hardwood and softwood trees, as well as stacks of logs.

Chilocorus orbus is a species of lady beetle in the family Coccinellidae. It is native to North America. It is a black, domed beetle with two large red spots and is commonly called the twice-stabbed lady beetle. Both adults and larvae feed on scale insects.

Cryptognatha nodiceps, known generally as the coconut scale predator or sugarcane scale predator, is a species of lady beetle in the family Coccinellidae; it is found in the Caribbean region, North America, and Oceania, having been introduced to various countries in an attempt to provide biological pest control of the coconut scale.

Tropinota is a genus of fruit and flower chafers in the beetle family Scarabaeidae. There are about 14 described species in Tropinota.