Trudy Frances Charlene Mackay FRS (born 10 September 1952) [1] is the director of Clemson University's Center for Human Genetics [4] located on the campus of the Greenwood (S.C.) Genetic Center. [5] She is recognized as one of the world's leading authorities on the genetics of complex traits. Mackay is also the Self Family Chair in Human Genetics and Professor of Genetics and Biochemistry [6] at Clemson University. [7]

Mackay was formerly the William Neal Reynolds and Distinguished University Professor at North Carolina State University, [9] [10] [11] where she specialized in quantitative genetics. [12] [13] [14] She is responsible for establishing the Drosophila Genetic Reference Panel. [15]

Mackay's research investigates the environmental and genetic factors that influence quantitative traits. [17] These phenotypic traits include height or weight and are represented by continuous, rather than discrete, values. [17] Her work is undertaken by studying the impact of natural variants and mutations on many behavioural, morphological, physiological and life history traits in fruit flies, which she uses as a model organism. [17]

The broad importance of such traits gives Mackay's work potential application in many areas — from improving plant breeding and animal breeding to the treatment of human diseases. [17] Mackay is the co-author with Douglas Scott Falconer of the fourth edition of the widely used and highly cited textbook, Introduction to Quantitative Genetics, published in 1996. [18]

Heritability is a statistic used in the fields of breeding and genetics that estimates the degree of variation in a phenotypic trait in a population that is due to genetic variation between individuals in that population. It measures how much of the variation of a trait can be attributed to variation of genetic factors, as opposed to variation of environmental factors. The concept of heritability can be expressed in the form of the following question: "What is the proportion of the variation in a given trait within a population that is not explained by the environment or random chance?"

Genetic architecture is the underlying genetic basis of a phenotypic trait and its variational properties. Phenotypic variation for quantitative traits is, at the most basic level, the result of the segregation of alleles at quantitative trait loci (QTL). Environmental factors and other external influences can also play a role in phenotypic variation. Genetic architecture is a broad term that can be described for any given individual based on information regarding gene and allele number, the distribution of allelic and mutational effects, and patterns of pleiotropy, dominance, and epistasis.

Deborah Charlesworth is a population geneticist from the UK, notable for her important discoveries in population genetics and evolutionary biology. Her most notable research is in understanding the evolution of recombination, sex chromosomes and mating system for plants.

Douglas Scott Falconer was a Scottish geneticist known for his work in quantitative genetics. Falconer's book Introduction to quantitative genetics was written in 1960 and became a valuable reference for generations of scientists. Its latest edition dates back to 1996 and is coauthored by Trudy Mackay.

Alan Robertson was an English population geneticist. Originally a chemist, he was recruited after the Second World War to work on animal genetics on behalf of the British government, and continued in this sphere until his retirement in 1985. He was a major influence in the widespread adoption of artificial insemination of cattle.

William George Hill was an English geneticist and statistician. He is professor emeritus at University of Edinburgh since his retirement in 2002. He is credited as co-discoverer of the Hill–Robertson effect with his doctoral advisor, Alan Robertson.

A recombinant inbred strain is an organism with chromosomes that incorporate an essentially permanent set of recombination events between chromosomes inherited from two or more inbred strains. F1 and F2 generations are produced by intercrossing the inbred strains; pairs of the F2 progeny are then mated to establish inbred strains through long-term inbreeding.

Drosophila Genetic Reference Panel (DGRP) is a suite of Drosophila melanogaster lines derived from an out-crossed population in Raleigh, North Carolina. The founders of these lineages were collected from the Raleigh State Farmer's Market 35.764254°N 78.662935°W. The suite consists of 205 fully sequenced lines which have been inbred to near homozygosity. The primary goal of the DGRP is to provide a common set of strain for quantitative genetics research in Drosophila. Each researcher who uses the lines from the DGRP will have access to other researchers' data, which will be stored in a publicly available database. This allows for analyses to be performed across studies without having to worry about complications arising from different labs using genomically different lines of fruit flies. 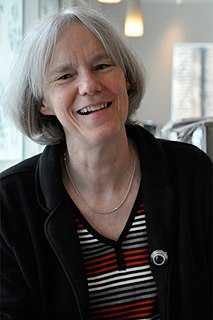 Elizabeth Jane Robertson is a British developmental biologist based at the Sir William Dunn School of Pathology, University of Oxford. She is Professor of Developmental Biology at Oxford and a Wellcome Trust Principal Research Fellow. She is best known for her pioneering work in developmental genetics, showing that genetic mutations could be introduced into the mouse germ line by using genetically altered embryonic stem cells. This discovery opened up a major field of experimentation for biologists and clinicians.

Liam Dolan is the Sherardian Professor of Botany in the Department of Plant Sciences at the University of Oxford and a Fellow of Magdalen College, Oxford. 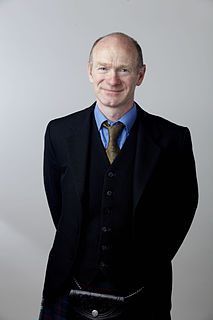 Mendelian traits behave according to the model of monogenic or simple gene inheritance in which one gene corresponds to one trait. Discrete traits with simple Mendelian inheritance patterns are relatively rare in nature, and many of the clearest examples in humans cause disorders. Discrete traits found in humans are common examples for teaching genetics.

Michael Edward "Mike" Goddard is a professorial fellow in animal genetics at the University of Melbourne, Australia. 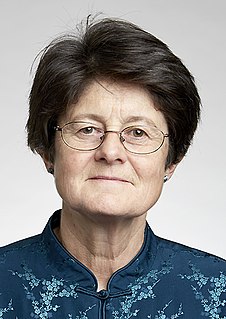 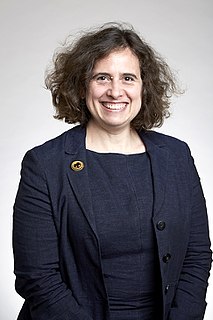 Anne Carla Ferguson-Smith is a mammalian developmental geneticist. She is the Arthur Balfour Professor of Genetics, Head of the Department of Genetics at the University of Cambridge and a Fellow of Darwin College, Cambridge.

Jonathan Flint is a British behavior geneticist and Professor in Residence in the Department of Psychiatry and Biobehavioral Sciences at the David Geffen School of Medicine at UCLA. He is also a senior scientist in the Center for Neurobehavioral Genetics at UCLA's Semel Institute for Neuroscience and Human Behavior.

Silvia Paracchini FRSE is a geneticist who researches the contribution of genetic variation to neurodevelopmental traits such as dyslexia and human handedness.

Matthew Edward Hurles is head of human genetics at the Wellcome Sanger Institute and an honorary professor of Human Genetics and Genomics at the University of Cambridge.

Richard M. Harland is CH Li Distinguished Professor of Genetics, Genomics and Development at the University of California, Berkeley.