"TrueScale" or "TSM" as it is often referred to in collecting community forums, exhibits a focus on motor sports with leanings towards classic Formula 1 and sports car racing in its various forms.

TrueScale Miniatures caters to model car collectors and motor sports fans through various channels, but their main focus is in the model car hobby industry as evidenced in their heavy advertising and product reviews in industry specific magazines such as Car Room magazine, and attendance at select hobby related trade shows such as the Nuremberg International Toy Fair. Typically, their products can be found in hobby and collectible shops, various online retailers, motor sports related shops, race track vendors, and occasionally even automotive museums.

TrueScale Miniatures’ first products were 1:18 and 1:43 scale replicas of specific tools from the Snap-on catalog. These miniature tool sets are typically used by modelers and collectors for use in automotive dioramas. These first sets are called "Garage Essentials" and include miniature replicas of 10 tools in the 2006 Snap-on Tool Catalog that would be found in many household garages. In 2008 they released their "Shop Essentials" set which offers scaled replicas of Snap-on tools found in many automotive service stations. Both sets are a part of their "Garage Series" which can still be found not only in many industry related retail outlets, but some official Snap-on franchisees as well. The 1:18 scale sets are mainly diecast metal with some plastic implementation whereas the 1:43 scale sets are mainly plastic with some diecast metal.

In early 2008, TrueScale made its entrance into the diecast model car market when it began producing its own line of 1:18 scale replicas, beginning with the 1980 Porsche 935 K3 Le Mans Apple Computer car. With opening doors, and a removable hood and tail section revealing a highly detailed engine, they had debuted what Sports Car Digest called "A thoroughly impressive (model) from every angle." [1]

The Signature Series is a line of models within the TrueScale Miniatures brand in which the race car driver, team owner, or someone pivotal in the successes of the real race car lends their hand signature to the base of the model. The signatures are hand signed and not artificially replicated making their Signature Series models more sought after than similar models. The models themselves are limited in production quantity, typically less than a thousand pieces, which further adds to their appeal to collectors.

Persons associated with the Signature Series:

TrueScale Miniatures is currently distributed in over 20 countries around the world. [2] Their products have also been routinely featured in numerous international magazines, including The Diecast Magazine of Australia, Modell Fahrzeug of Germany and Model Cars of Japan.

Beginning in late 2009 and continuing through 2010, TrueScale Miniatures produced a series of Porsche race car models featuring Coca-Cola livery, all driven by famous driver Bob Akin. While this was not the first time that a Coca-Cola race car model had been produced by a company, TrueScale has received recognition for their production of such a widely encompassing collection of cars under such a recognizable livery. [3]

A model car, or toy car, is a miniature representation of an automobile. Other miniature motor vehicles, such as trucks, buses, or even ATVs, etc. are often included in this general category. Because many miniature vehicles were originally aimed at children as playthings, there is no precise difference between a model car and a toy car, yet the word 'model' implies either assembly required or the accurate rendering of an actual vehicle at smaller scale. The kit building hobby became popular through the 1950s, while the collecting of miniatures by adults started to pick up momentum around 1970. Precision-detailed miniatures made specifically for adults are a significant part of the market since the mid-1980s. 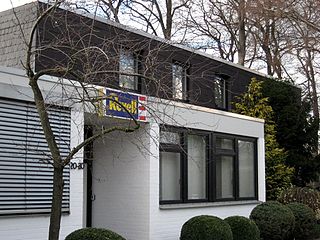 Revell GmbH is an American-origin manufacturer of plastic scale models, currently based in Bünde. The original Revell company merged with Monogram in 1986, becoming "Revell-Monogram". The business operated until 2007, when American Revell was purchased by Hobbico, while the German subsidiary "Revell Plastics GmbH" had separated from the American firm in 2006 until Hobbico purchased it as well, in 2012 –bringing the two back together again under the same company umbrella. After the Hobbico demise in 2018, Quantum Capital Partners (QCP) acquired Revell

A die-cast toy is a toy or a collectible model produced by using the die casting method of putting molten lead, zinc alloy or plastic in a mold to produce a particular shape. Such toys are made of metal, with plastic, rubber, glass, or other machined metal parts. Wholly plastic toys are made by a similar process of injection moulding, but the two methods are distinct because of the properties of the materials.

Maisto is a brand of scale model vehicles introduced and owned by May Cheong Group, a Chinese company founded in 1967 in Hong Kong by brothers P.Y. Ngan and Y.C Ngan. The company has also subsidiaries in the United States, France, and China. MCG also owns other model car brands such as Italian former company Bburago and Polistil.

Schuco is a German manufacturing company founded in 1912 by Heinrich Müller and the businessman Heinrich Schreyer in Nuremberg Germany's toy capital since early days. The company's specialty was making toy reproductions of cars and trucks in tin, plastic and die-cast. The company went bankrupt in 1976 but was reorganized in 1993 and then totally independent again by 1996. 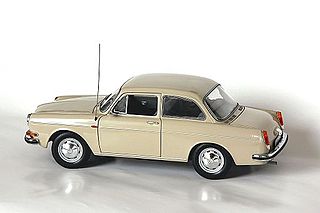 Minichamps is a die-cast car producer founded as Paul's Model Art GmbH in 1990 in Aachen, (Germany), best known for its 1:43 scale models. The company grew out of the Danhausen trade catalog of miniature vehicles and specially made Danhausen diecast releases during the 1970s.

Playart was a toy company owned by Hong Kong industrialist Duncan Tong (唐鼎康) that specialized in die-cast cars, similar in size and style to Hot Wheels, Matchbox or Tomica. Cars were well done, but were often diecast seconds from other companies like Yatming or Tomica. Cars were made from 1965 to 1983 at the factory in San Po Kong, Kowloon, Hong Kong. Plastic cars and trucks of 1:43, and 1:24 scale were also made, while trains and other theme toys also appeared.

BBurago is an Italian brand and former manufacturing company of toys and die-cast scale model cars. The company was based in Burago di Molgora, where all products were made from 1974 to 2005. At its most popular, Bburago's main competition were Politoys and Maisto, the latter of which was to become dominant in the 1:18 market segment around 2000.

1:43 scale is a popular size of die-cast model cars in Europe, Asia and the US. It has its origins in the British / European O scale for model trains and the rise of certain accessories made for that scale which since have become popular in their own right.

1:18 scale diecast replicas are 1/18th the size of the real vehicle. Most popular in this category are 1:18 scale automobile replicas – usually made out of Zamak zinc diecasting alloy with plastic parts. "1:18 scale" is the colloquial reference to this class of toy or replica.

Nürnberger Zinkdruckguß-Modelle GmbH is a German manufacturer of diecast scale models primarily in 1:50 scale for use both as toys and promotional models mainly by heavy transport and construction equipment manufacturers.

Meccanica Bessana Toys, was an Italian toy manufacturer that produced die-cast scale model cars during the 1960s and 1970s.

Vitesse was started in 1982 as a Portuguese company making diecast cars mostly in 1:43 scale. It was founded in the city of Oporto and is a brand name of Cinerius, Ltd. 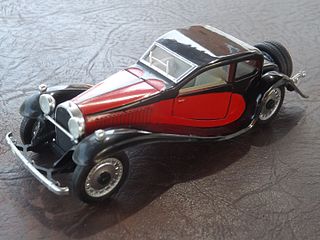 RIO Models was an Italian manufacturer of diecast and plastic 1:43 scale model cars, based in Cernobbio, Italy.

Brumm is a collectible model company that makes diecast metal automobiles and horse-drawn carriages. It is based in Oltrona di San Mamette, southwest of Lake Como, Italy - about 25 miles northwest of Milan. Models are almost exclusively produced in 1:43 scale.

Cursor Modell was a German company making models of antique and modern German vehicles. It is best known for its plastic replicas of vehicles mainly of the era 1880 to about 1920, produced for, and sold in, the Daimler-Benz museum in Stuttgart.

Winross is a diecast model truck producer based in Churchville, New York, just west of Rochester. The company was started in 1963 to make models of White brand trucks. Winross was the pioneer in 1/64 scale promotional model semi-tractor-trailer trucks. The trucks were known for their wide variety of logos and promotional ads on their sides. Over time trucks have become more sophisticated and the company has moved into silk screen printing for a variety of products.

Greenlight Collectibles or simply Greenlight is an American manufacturing company based in Indianapolis, which produces die-cast scale model vehicles. The company was founded in 2002, and mainly produces diecast models of cars, trucks, and other vehicles.

Round 2 is an American manufacturing company which produces scale models including die-cast, plastic, slot cars, and other hobby products. The company is based in South Bend, Indiana. The company was founded in 2005 by Thomas E. Lowe who previously owned a toy company Playing Mantis. Round 2 holds several hobby brands, most of which were acquired and relaunched by Round 2 under the original brand name. Brands sold under Round 2 includes long-running model kit and diecast brands, including AMT, Hawk, Johnny Lightning, MPC, and Racing Champions.