It has two symmetry constructions, one from the truncated octahedron, and one as an omnitruncation of the tetrahedron.

It is one of 18 uniform polyhedral prisms created by using uniform prisms to connect pairs of parallel Platonic solids and Archimedean solids.

is the alternation of the truncated octahedron in its tetrahedral symmetry

, although it cannot be constructed as a uniform 4-polytope. It can also be seen as an alternated truncated octahedral prism or pyritohedral icosahedral antiprism,

A construction exists with two regular icosahedra in snub positions with two edge lengths in a ratio of around 0.831 : 1.

‹ The stub template below has been proposed for renaming to 4-polytope-stub. Please share your thoughts at this template's entry on the Categories for discussion page.

Please do not edit, blank or rename the template, or remove it from articles where it is used, while the discussion is in progress. › 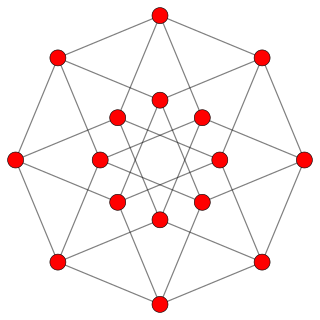 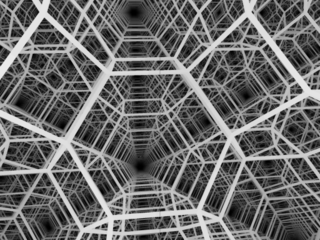 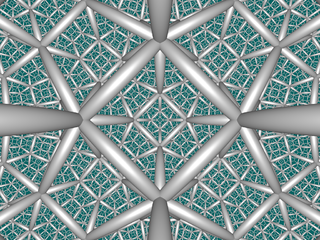 The order-5 cubic honeycomb is one of four compact regular space-filling tessellations in hyperbolic 3-space. With Schläfli symbol {4,3,5}, it has five cubes {4,3} around each edge, and 20 cubes around each vertex. It is dual with the order-4 dodecahedral honeycomb. 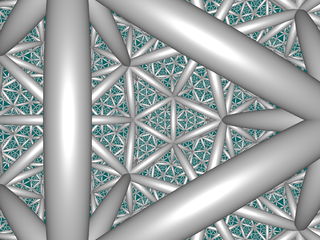 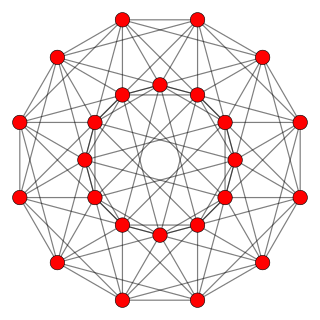 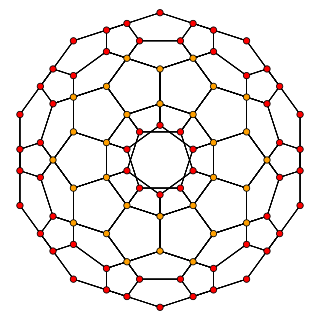 In four-dimensional geometry, a runcinated 120-cell is a convex uniform 4-polytope, being a runcination of the regular 120-cell.

In geometry, an icosahedral prism is a convex uniform 4-polytope. This 4-polytope has 22 polyhedral cells: 2 icosahedra connected by 20 triangular prisms. It has 70 faces: 30 squares and 40 triangles. It has 72 edges and 24 vertices. 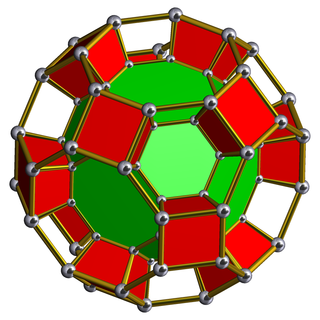 In hyperbolic 3-space, the order-6 tetrahedral honeycomb is a paracompact regular space-filling tessellation. It is paracompact because it has vertex figures composed of an infinite number of faces, and has all vertices as ideal points at infinity. With Schläfli symbol {3,3,6}, the order-6 tetrahedral honeycomb has six ideal tetrahedra around each edge. All vertices are ideal, with infinitely many tetrahedra existing around each vertex in a triangular tiling vertex figure.