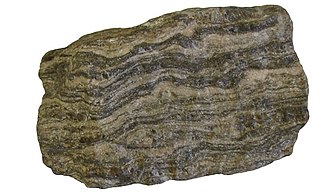 Gneiss is a common and widely distributed type of metamorphic rock. Gneiss is formed by high-temperature and high-pressure metamorphic processes acting on formations composed of igneous or sedimentary rocks. Orthogneiss is gneiss derived from igneous rock. Paragneiss is gneiss derived from sedimentary rock. Gneiss forms at higher temperatures and pressures than schist. Gneiss nearly always shows a banded texture characterized by alternating darker and lighter colored bands and without a distinct foliation. 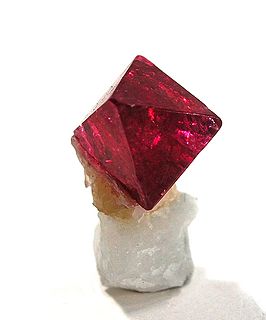 Spinel is the magnesium/aluminium member of the larger spinel group of minerals. It has the formula MgAl
2O
4 in the cubic crystal system. Its name comes from the Latin word spinella, which means spine in reference to its pointed crystals.

Metamorphic rocks arise from the transformation of existing rock to new types of rock, in a process called metamorphism. The original rock (protolith) is subjected to temperatures greater than 150 to 200 °C and, often, elevated pressure, causing profound physical or chemical changes. During this process, the rock remains mostly in the solid state, but gradually recrystallizes to a new texture or mineral composition. The protolith may be a sedimentary, igneous, or existing metamorphic rock.

A rock is any naturally occurring solid mass or aggregate of minerals or mineraloid matter. It is categorized by the minerals included, its chemical composition and the way in which it is formed. Rocks form the Earth's outer solid layer, the crust, and most of its interior, except for the liquid outer core and pockets of magma in the asthenosphere. 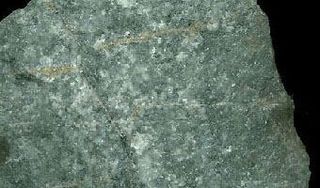 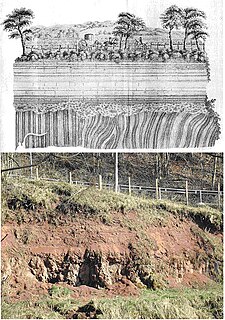 An unconformity is a buried erosional or non-depositional surface separating two rock masses or strata of different ages, indicating that sediment deposition was not continuous. In general, the older layer was exposed to erosion for an interval of time before deposition of the younger layer, but the term is used to describe any break in the sedimentary geologic record. The significance of angular unconformity was shown by James Hutton, who found examples of Hutton's Unconformity at Jedburgh in 1787 and at Siccar Point in 1788. 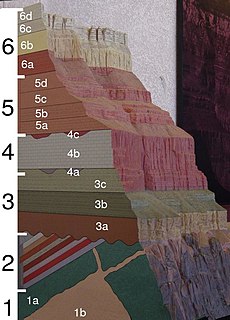 A geological formation, or formation, is a body of rock having a consistent set of physical characteristics (lithology) that distinguish it from adjacent bodies of rock, and which occupies a particular position in the layers of rock exposed in a geographical region. It is the fundamental unit of lithostratigraphy, the study of strata or rock layers. 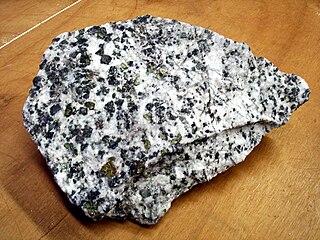 Carbonatite is a type of intrusive or extrusive igneous rock defined by mineralogic composition consisting of greater than 50% carbonate minerals. Carbonatites may be confused with marble and may require geochemical verification.

Lherzolite is a type of ultramafic igneous rock. It is a coarse-grained rock consisting of 40 to 90% olivine along with significant orthopyroxene and lesser amounts of calcic chromium-rich clinopyroxene. Minor minerals include chromium and aluminium spinels and garnets. Plagioclase can occur in lherzolites and other peridotites that crystallize at relatively shallow depths. At greater depth plagioclase is unstable and is replaced by spinel. At approximately 90 km depth, pyrope garnet becomes the stable aluminous phase. Garnet lherzolite is a major constituent of the Earth's upper mantle. Lherzolite is known from the lower ultramafic part of ophiolite complexes, from alpine-type peridotite massifs, from fracture zones adjacent to mid-oceanic ridges, and as xenoliths in kimberlite pipes and alkali basalts. Partial melting of spinel lherzolite is one of the primary sources of basaltic magma. 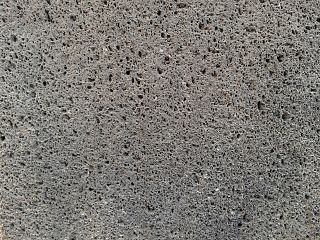 The Crowsnest Formation, also called the Crowsnest Volcanics, is a geological formation in southwestern Alberta, Canada, on the southwestern margin of the Western Canada Sedimentary Basin. It was named for the Crowsnest Pass near Coleman, Alberta. The formation consists mostly of pyroclastic rocks that were laid down in a series of explosive eruptions about 100 million years ago during the Albian stage of the Early Cretaceous epoch. It contains unusual minerals such as melanite and analcime.

Jacobsville Sandstone is a red sandstone formation, marked with light-colored streaks and spots, primarily found in northern Upper Michigan, portions of Ontario, and under much of Lake Superior. Desired for its durability and aesthetics, the sandstone was used as an architectural building stone in both Canada and the United States. The stone was extracted by thirty-two quarries throughout the Upper Peninsula of Michigan approximately between 1870 and 1915.

The Cathedral Formation is a stratigraphic unit in the southern Canadian Rockies of Alberta and British Columbia, on the western edge of the Western Canada Sedimentary Basin. It is a thick sequence of carbonate rocks of Middle Cambrian age. It was named for Cathedral Mountain in Yoho National Park by Charles Doolittle Walcott, the discoverer of the Burgess shale fossils.

The geology of the Isle of Skye in Scotland is highly varied and the island's landscape reflects changes in the underlying nature of the rocks. A wide range of rock types are exposed on the island, sedimentary, metamorphic and igneous, ranging in age from the Archaean through to the Quaternary. 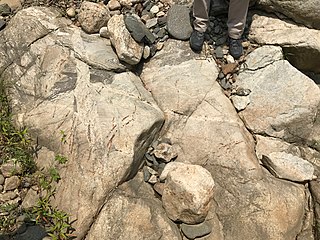